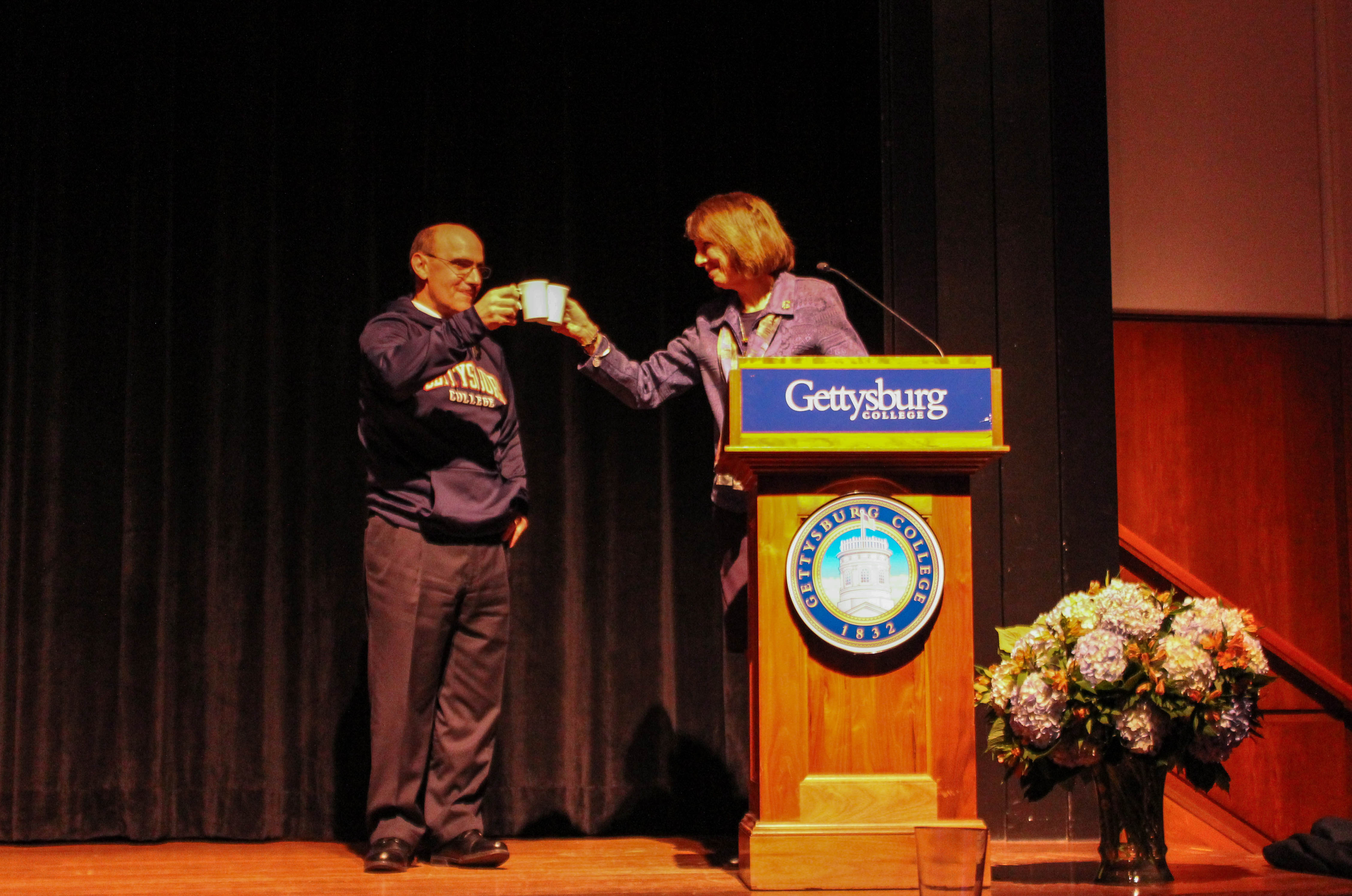 In honor of President Janet Morgan Riggs’s retirement, all Gettysburg athletic teams will retire the number 77 as a gesture of thanks for her service to the school since graduating in 1977.

Back in January, President Riggs and her husband Ed (also Class of 1977) were honored in-between Bullets’ basketball games as two seats in Bream Gym were reserved in their name and accompanied by a plaque commemorating the occasion.

The Athletics Office has noted that, in all likelihood, seats in all Gettysburg athletic venues will be reserved in a similar manner.

Though this will affect only one Gettysburg athlete who actually wears the #77 – Bobby Steiner ’22 of the football team – no future Bullet athlete will have the option to wear the number.

As our current president retires at the end of June, incoming president Robert Iuliano will be leaving the Crimson in favor of the Orange and Blue.

On February 8 at the president-elect’s welcome ceremony in the College Union Building ballroom, after an introduction from JMR, Iuliano was gifted a Gettysburg College sweatshirt.

As he donned it, Iuliano officially became the 15th president drafted to the Gettysburg Bullets. Because of his impressive stats at the prestigious Harvard University where he has worked since 1994, Iuliano was a clear top pick for the job by the College’s Board of Trustees.

Though there was a slew of impressive candidates who showed well at the combine (interview), Iuliano separated himself from the other prospects with his work in overseeing the University Police Department, reestablishing ROTC, and serving on the committee to select Harvard’s 28th and 29th presidents.

However, both schools share some similarities in the athletic department, mainly in the fierce rivalries they have with other similar schools.

For Harvard, the age-old rivalry with Yale has been a time honored tradition, on a similar level as the Army/Navy rivalry. More recently, the Crimson have established a strong rivalry with Cornell and other Ivy League opponents.

For Gettysburg, a rivalry with Dickinson has been in place since the 1990s. Even more recently, one with Franklin & Marshall emerged in the early 2000s, though every Centennial Conference game is a big one.

Harvard and Gettysburg also share unique mascots in being the Crimson and Bullets, both of which are tied to the schools’ storied pasts.

There are various legends surrounding the naming of Harvard athletics, but the most common story is that two crew members in 1858 bought six red Chinese handkerchiefs before a competition and that as they wiped their brows, the sweat turned the handkerchiefs crimson. News spread around campus, and the name was born.

Gettysburg has a much more definitive backstory regarding its mascot. In 1924, the editor of the Gettysburg Times compared the football team to speeding “Bullets” with a nod to the battlefield around campus and, thereafter, the name stuck.

Though Iuliano will surely still root for the Harvard Crimson against the Yale Bulldogs, he will have to become more accustomed to cheering for the Bullets against the Red Devils of Dickinson and the Diplomats of Franklin & Marshall.

Furthermore, though the Bullets will in all likelihood not win 142 more national championships in Iuliano’s time as president to match his alma mater’s tally, hopefully they can at least make a dent into that total.