The Story of a Great Gettysburgian: Janet Morgan Riggs as a Student of Gettysburg College

Home » Features » The Story of a Great Gettysburgian: Janet Morgan Riggs as a Student of Gettysburg College 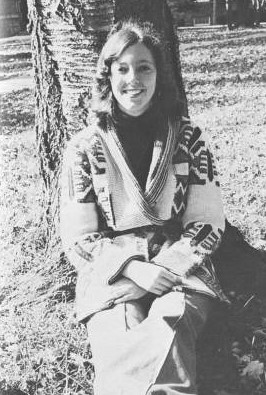 Before becoming the president of Gettysburg College, Janet Morgan Riggs was simply a first-year student in 1973 who had no idea what the future would hold and where her Gettysburg College education would take her.

Reflecting on her very first moments as a student on the Gettysburg campus with clarity, Riggs explained, “I can still picture that moment. I moved into Huber Hall. It was a super hot day, and I was on the third floor, where it was even hotter. I remember standing on the steps watching my parents drive away.”

Riggs vividly remembers feeling nervous to begin college, especially facing separation from home for the first time. She quickly warmed up to campus after getting to know friends on her floor and developing a close relationship with her roommate. Her apprehensions quickly faded away, and she recalled, “Within days, I had felt like I’d been here forever.”

The comfort she experienced on campus within a short time stemmed from her initial inclination to attend Gettysburg College. Coming from a large high school just outside of Philadelphia, Riggs was drawn to the small size of Gettysburg. A recommendation from a family friend, coupled with an extraordinary visit on a rainy October day solidified her choice to apply early decision.

An integral part of Riggs’s extracurricular experience at Gettysburg was her participation in the marching band. As a color guard captain during high school, Riggs continued her extracurricular leadership even further at Gettysburg, serving as co-captain during her sophomore and junior years and captain senior year. She spoke fondly of the experience spent “twirling flags, […] rifles, and the whole deal.” She had a special bond with members of the band and recalls traveling on buses to perform at away games.

In fact, Riggs was given a particularly special leadership position her senior year. Although we know her as our fearless leader at Gettysburg, Riggs remembered an early, poignant moment of responsibility when the band director asked her to write field shows for the color guard: “That was a big responsibility to just hand to a student, and I was really into it. So, talk about nice leadership experience, that’s pretty big!”

Starting in the fall of her sophomore year, Riggs joined Chi Omega, and she fondly remembers her time in the sorority.

“I really enjoyed it,” said Riggs, speaking of Chi Omega. “It was a great way to make some friends, and we had a lot of good times together.”

At the time, a larger proportion of students participated in Greek life. Riggs personally benefited from the connections made through the organization but did not feel like it defined her college identity.

Riggs also fostered connections in academic departments at Gettysburg. She worked as a research assistant in the psychology department during her sophomore and junior years. She continued her undergraduate research with an independent study program in her senior year.

Although Riggs was heavily involved in the psychology department, her original intent was to major solely in mathematics. After a terrible experience in a high school psychology class, she was not excited to see ‘Psychology 101’ on her first-year schedule. Riggs ultimately loved the course, and she continued to pursue psychology, a subject that she was passionate about. A major source of guidance during her time at Gettysburg was the psychology professor, Thane Pittman, who encouraged Riggs to take on research and apply to graduate school.

The combination of acquired skills from direct research in her undergraduate studies and a background in statistics made her well-equipped for the challenges of the program.

Along with challenging academics and extracurricular activities, Riggs devoted time to developing friendships during her years at Gettysburg. She formed an especially close bond with her first-year floor.

“We had an awesome time on the third floor of Huber,” she said. “We had a great group up there, and we did so much hanging out in the hallway together.”

One of her favorite spots on campus was the old Bullet Hole, which was located adjacent to the CUB Ballroom. She explained how she spent a lot of time socializing and talking over sodas at night with friends. She had the self-discipline to complete assignments but also valued the social aspect of college and the importance having fun.

Over the years, Riggs maintained relationships with friends from college, one of which is her husband, Ed. They met during their first-year orientation, where they just happened to run into one another: “We just connected early on and stayed connected.”

They had their own interests, and Ed was a cross country and track athlete. They married a year after they graduated.

Riggs reflected on the numerous changes to campus and the Gettysburg student experience. Housing, in particular, was not comprised of campus apartments or college theme houses. The extent of co-ed housing was a shared lobby. Riggs explained how Apple Hall, where she lived her sophomore and junior year, was divided into separate male- and female-designated corridors. She lived off-campus her senior year, which was a common occurrence at the time.

Riggs noted that students were less busy and scheduled in the 1970’s, and opportunities for studying abroad were especially rare. She also observed a substantial difference in faculty demographics. Out of the thirty-five courses Riggs took at Gettysburg, she only had two female instructors.

President Riggs benefited from the guidance and experiences of a close-knit college environment. The development of a dialogue between faculty and students that fosters research, career opportunities, and encouragement is continually valued in the Gettysburg College community.

“That’s really what made a difference for me at Gettysburg,” emphasized Riggs. “It was those relationships with the faculty. I felt like people knew who I was, and I received advice, support, and learned a lot. I am really grateful for that. I felt like I got an excellent education.”