The Story of a Great Gettysburgian: Janet Morgan Riggs as Professor

Home » Features » The Story of a Great Gettysburgian: Janet Morgan Riggs as Professor

Janet Morgan Riggs graduated with Gettysburg College’s senior class of 1977 with Princeton University on the horizon before her. At age 22, Riggs never expected that she would return to Gettysburg’s campus in four years, and this time, not as a student.

After earning her Ph.D. in Psychology from Princeton, Riggs returned to Gettysburg College in 1981 as a professor, an occupation she retained for the next decade until 1991 and intermittently until her appointment as interim provost in 2006. Riggs had everything lined up; her grad work, the data for her dissertation, and several job interviews had all been completed. So when Gettysburg offered a year-long teaching position to replace a faculty member who was on sabbatical, Riggs, at age 26, said yes.

“This would be a good place for me to come back while I was finishing my dissertation and to get some really good teaching experience,” Riggs remembered thinking.

Her familiarity with the college’s Psychology department and the fact that her husband was student-teaching in the area were additional selling points that convinced her to take the job. Riggs was warmly welcomed into her alma mater’s Psychology department; however, she recalled, laughing, that it was a bit awkward at times, as people would often mistake her for an undergraduate student.

Still, she remarked, “It was an easier adjustment than I would have imagined,” and she was surprised at her own enthusiasm for her newfound profession.

Though Riggs hadn’t planned on staying more than a year, one of her fellow faculty members did not receive tenure that year, so she applied for the position. She was happy to accept the subsequent job offer because, during her first year, the college had provided the supportive environment she needed to be able to finish and defend her dissertation.

“It made me realize that this is the kind of environment I really wanted to have a career in,” said Riggs, “This balance of teaching and research, focus on undergraduates—it just felt right to me.”

She elaborated, “I think our faculty as a whole have a very distinctive way of combining teaching and scholarship. And so the desire to be really excellent in teaching but to be deeply engaged in one’s discipline I think is a fantastic combination. And engaging students in some of that research and creative activity is probably one of the best learning experiences that I’ve ever been offered, and I think that we do that so well here.”

“I loved teaching,” Riggs said. “That’s a thing I’ve always missed…I enjoyed being in the classroom with a small group of students and really getting to know them…I just really liked that close relationship with students.”

While Riggs has received multiple awards for her work, she mentioned being especially touched by the Student Senate Appreciation Award, which is now known as The Dr. Ralph Cavaliere Endowed Teaching Award.

“That really meant a lot to me because it came from the students,” she reflected.

“There’s nothing quite like being in that role of faculty member and building those close relationships with the students and helping to inspire their interests. I just find that to be so gratifying. It’s a piece of my life that I will always cherish, having had that experience,” Riggs admitted.

While she has not been able to keep in touch with all of her former students, she said, “It’s really fun, once in a while, for me to hear what a former student is doing.”

One former student, Allison Meckley ‘05 now works as the Program Director for Girl Scouts in the Heart of Pennsylvania in Harrisburg, PA. A psychology major at Gettysburg, Meckley was randomly assigned Riggs as an advisor. From the start, they shared a connection, especially due to their shared interest in social psychology.

Meckley remembered having Riggs as a professor for both Psych 101 and the methods course for psychology. Meckley’s methods class consisted of approximately 10 people, so they became a close-knit group. According to Meckley, they even had a Secret Santa at Christmastime.

Riggs herself found it hard to pick a favorite class but ultimately shared that Experimental Methods would be high on her list. As with most other disciplines’ methods classes, this one Riggs described as one that all the Psychology majors were required to take but still dreaded anyway because of its notorious difficulty. Nevertheless, Riggs “kind of liked the challenge of converting students, helping them to understand why these skills were so important and that they could acquire them.”

Riggs appears to have “converted” Meckley, who remembered having interesting conversations with Riggs about understanding people and interpreting their behavior for research and as a way to help others.

Meckley feels deeply impacted by her years as Riggs’ pupil. Still today, she thinks critically and sees human behavior as a complex thing. Even when watching Good Morning America, Meckley develops follow-up questions and thinks beyond the stories or statistics presented to her. According to Meckley, Riggs’ passion about social psychology spread to her students, who could not help but be drawn to the material Riggs taught and how she taught it.

As Meckley’s advisor, Riggs was always supportive when Meckley came to speak with her, whether their conversation revolved around career aspirations or personal issues.

“When I think about who she is,” said Meckley about Riggs, “I’m so proud of her.”

Riggs taught Meckley and other Gettysburg students in a number of social psychology and education courses during her professional time at Gettysburg, all stemming from her college major.

“One of the reasons I was drawn to social psychology as a student was that I felt it helped me understand everyday life and daily interactions, and I found that to be fascinating,” she explained. “It’s hard for me to even separate the way I think about the world—anything—from the social psychologist in my head.”

This personal connection to the curricular material is what inspired Riggs to conduct psych studies on expectancy and confirmation. Her research later prompted her interest in the ways that she could raise the expectations of all students. In particular, she referenced “self-handicapping,” describing a scenario in which students withhold effort from a task due to a fear of failure. Riggs was determined to combat this possibility and actively searched for ways to motivate students to put their best foot forward without always viewing failure as the probable outcome. 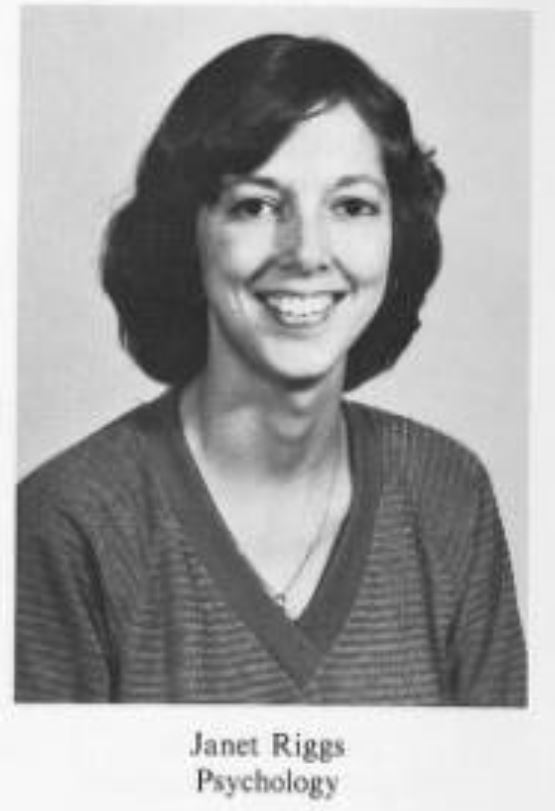 Throughout her time at Gettysburg, Riggs has consistently been impressed by her fellow faculty members: “Their enthusiasm for their work then carries into the classroom, and that is contagious. And I think our faculty do that so well!”

When asked what sets Gettysburg faculty apart from others, the first thing that came to Riggs’ mind was the unique combination of scholarship and teaching found in the classroom.

“The desire to be really excellent in teaching but to be deeply engaged in one’s discipline I think is a fantastic combination,” she said. “Engaging students in some of that research and creative activity is probably one of the best learning experiences that I’ve ever been offered.”

She has also seen the demographics of the faculty shift for the better. In the nineties, the administration pursued an interest in hiring more women. There were few enough women in her early teaching years that they would “get together for dinner—there might be eight of us around the table.” She appreciated that they could freely share perspectives and be supportive of one another.

She was part of the movement that pushed for daycare for professors’ children and paid maternity leave; she personally had to take unpaid leaves of absence when she had her three children and later struggled to find childcare for them. These struggles helped inspire her research on perceptions and expectations of caregiving and professional parents with respect to gender stereotypes. Still, Riggs recognizes a need to continue diversifying the faculty in terms of race and ethnicity. In light of this fact, she also noted that Gettysburg is changing for the better.

“When I see the faculty who are arriving today and their perspectives and the disciplinary expertise they bring, I am just so impressed,” she remarked on the subject.

Riggs has seen the campus change dramatically over the years, from changes in the faculty to the widespread introduction of technology in the classroom. Overall, her experience has been a positive one, and she has always loved her work. She is a Gettysburgian through and through, declaring proudly, “I don’t think you can beat Gettysburg!”

Julia Chin ‘21 is an English major and Music minor from the “Sunshine State.” Julia conforms to her major’s stereotypes by collaborating with The Mercury, carrying around her weight in books, and asserting her passion for tea and oxford commas; however, she occasionally breaks up the blissful silence of literature through swing dance, theatre rehearsals, and the music of College Choir and Spark Notes (the a cappella group, not the website for foolish children who wish to avoid reading).