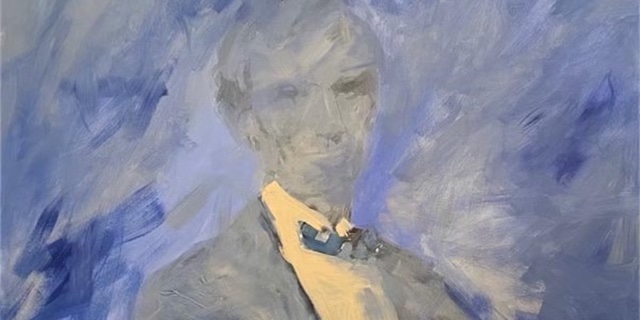 “Emanations” by Wendy Allen is a series of abstract portraits of Abraham Lincoln, currently on display at the art gallery in Majestic Theater daily, from September through the end of November.

Allen was born in Pittsburgh, PA, and worked in educational publishing for thirty years before she became a full-time artist in 2007. “Emanations” represents the culmination of a career-long interest in Lincoln—Allen even serves on the Board of Directors for The Lincoln Fellowship of Pennsylvania—and allows a new kind of reflection on the beloved president.

The series consists of 12 portraits of Lincoln. While the president’s silhouette can be made out in each one, the background of each portrait sports bright colors in broad, messy streaks which often bleed into Lincoln’s figure, weaving in with the strands of his hair, or bleed into his formal attire. Only two of the portraits scream “Lincoln,” even though they are all inspired by his most iconic photographs.

In one portrait, an aquamarine background almost fully obscures the president’s face, and yet the sharp silhouette can still be made out under close inspection. In another, the president’s figure changes from crisp to blurry from left to right; on one end he is even outlined, and on the other he seems to bleed into the peach-pink swaths of brushstrokes. With all this color and heavy brush work, Allen has managed to obscure the president’s image, to destabilize one’s recognition of him, but also prove how familiar he is, how he can still be recognized under layers of abstraction.

In the ninth work in the series, the magenta background blocks the bottom part of Lincoln’s face, drawing attention to his eyes which sit within a deep purple. The angles of the face are sharp and the forehead protrudes—everything is quite skeletal, and the impression reminds one of Lincoln’s ever-increasing distance from modernity; clearly, Allen does not want to relegate Lincoln to the dusty corners of history, but her work seems to mandate a modern perspective or reflection on the president, to question what place he holds in culture and politics today. As historical figures exist more as concepts than as real people, Lincoln also exists in a very fragmentary state here—by breaking down the expectations of a portrait of Lincoln, Allen breaks down our understanding of him, and demands a reconstruction of his image.

The series also recognizes the fact that the freedom Lincoln fought for is still not fully secured. The tenth portrait is mostly covered with an opaque sheet of gray paint, and the words ‘never finished’ are painted in yellow in an official-looking script. Scrawled in red are the words ‘because freedom is,’ and thus the portrait is incomplete because freedom is never finished. The meta joke points to the fact that honoring Lincoln is partially constituted by continuing to fight for freedom and equality today.

The most abstract portrait depicts Lincoln in swirls of white and black, and here he truly is unrecognizable—only the magenta outline lends a very slight familiarity to the portrait. Lincoln, like most presidents, is a contentious figure—some revere his bravery and morality, while others point out flaws in how he went about fighting the horrors of slavery. Perhaps an understanding of the president cannot be black-and-white, perhaps it is only through a more colorful, layered perspective, one which recognizes the opacity of history, that we can understand Lincoln and his place in the modern world. “Emanations” is certainly working to cultivate this alternate mode of understanding Honest Abe within the cultural imagination.