Review: “Into the Woods” 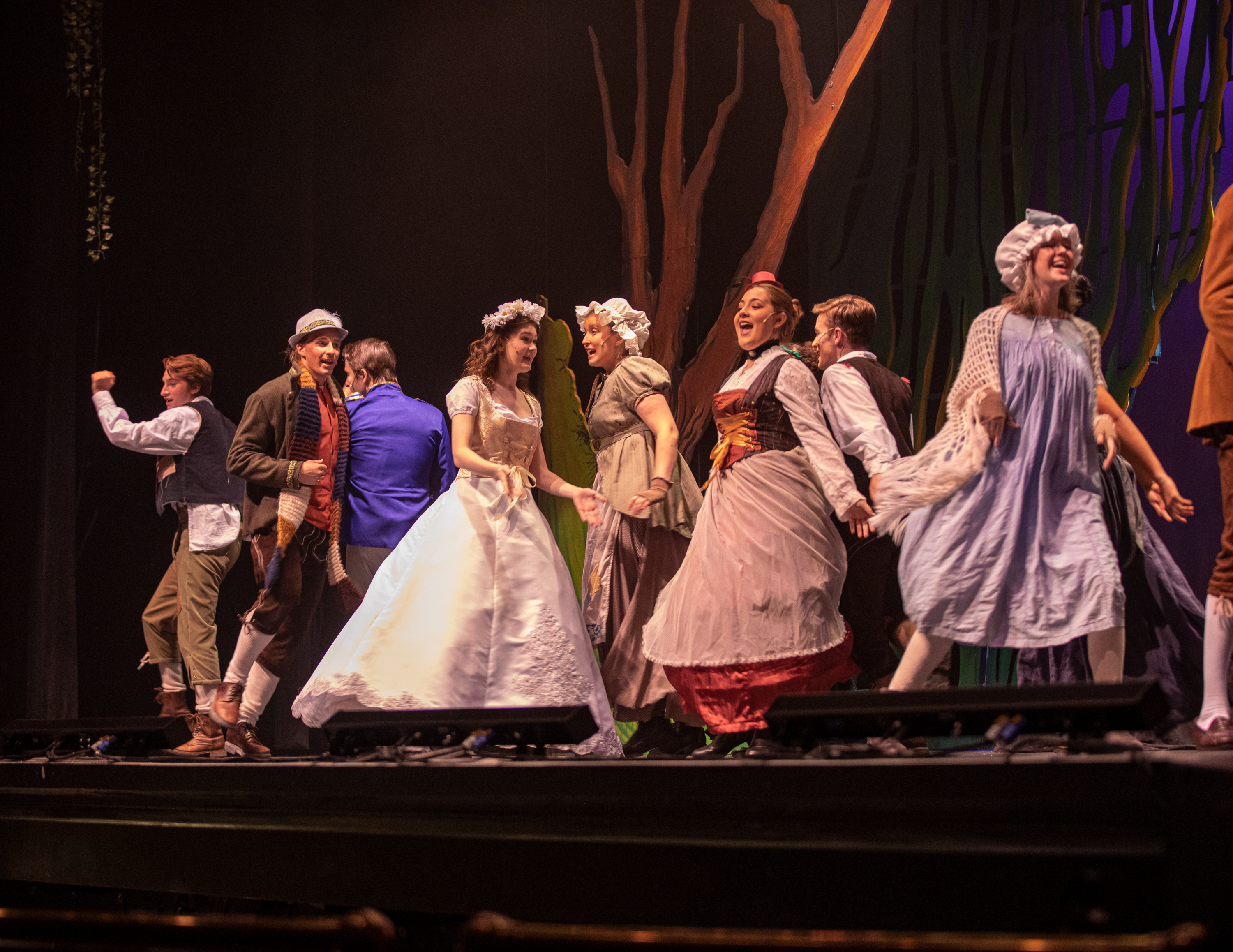 Gettysburg College’s newest theatrical production, “Into the Woods,” was presented by The Owl and Nightingale Players and the Department of Theatre Arts in collaboration with the Sunderman Conservatory of Music from November 4–7, 2021 at the Majestic Theatre. “Into the Woods,” based on the book by James Lapine, is a musical with lyrics and composition by the legendary Stephen Sondheim.

Director Christopher Kauffman described the musical as “a journey from wish—to fulfillment—to wish” with “peaks and valleys of longing, joy, fear, courage, and loss traversed along the way” in a note provided in the evening’s playbill. It is a mash-up of classic fairy tales and adds in a transformative and comedic ‘what if.’”

Kauffman’s directing of the play seemed to reflect a faithfulness to the original performance, embracing both its comedic highs and disquieting lows with absolute commitment, exploring the play’s themes with nuance.

Act One consisted of an interesting retelling of a combination of several iconic characters and stories. Featured are Little Red Riding Hood (Phoebe Doscher ’22), Jack (Brian Buechele ’22) from Jack and the Beanstalk, Rapunzel (Adela Holahan ’24), and Cinderella (Laura Duffy ’23), as well as a pair of protagonists unique to the play: the Baker (Zachary de Besche ’22) and the Baker’s Wife (Alexandra Charney ’22). The show follows these characters and their stories that take them “into the woods,” where their tales collide and overlap in fascinating fashion. 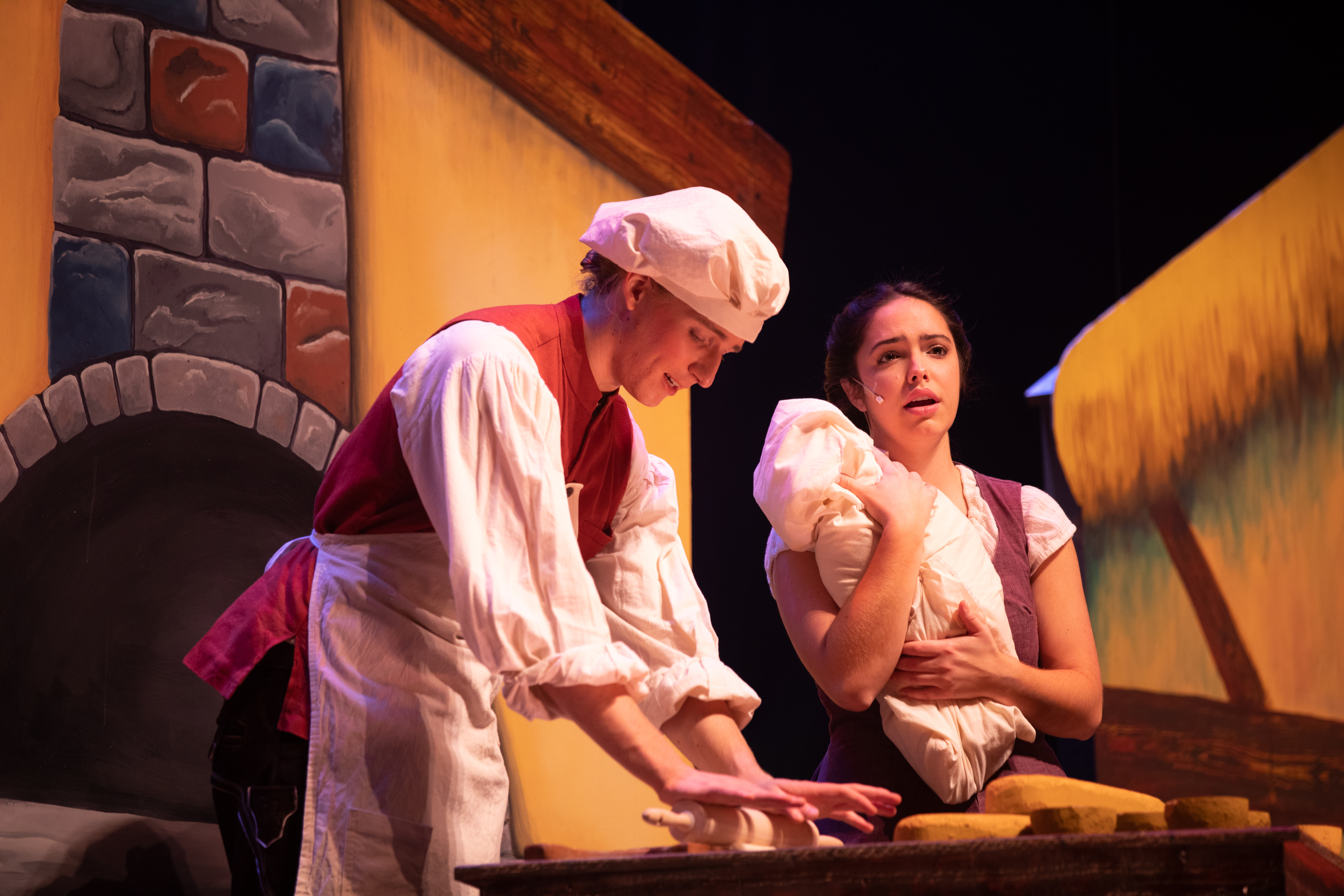 The impetus for the play’s plot arises when the Baker couple, in order to have a child, must acquire an iconic item from each of the classic fairy tale characters to appease the Witch (Anderson Gray ’23) and remove the curse she had placed years before on the Baker’s lineage (or rather, lack thereof). As the first act ends, all of the characters are happy; the wishes they expressed in the prologue have all been fulfilled, and everyone is as happy as can be.

Act Two, however, challenges the oversimplification of a “happily ever after,” and questions what really happens after everyone’s wishes come true and they have to go on living their lives. The characters still want for things even in their happy endings, and a threat emerges in the fallout of the characters’ first venture into the woods, drawing them back into the woods once more. In the end, only four of our main characters are left standing, and they are all forever changed.

I saw the production on Friday evening, and the energy of the show was off the charts right out of the gate. The play’s very first character, the Narrator, played by Joey Maguschak ’22, entered the stage to positively thunderous applause before even speaking a single word.

The entire first act seemed to be one hilarious joke landing after another, with the audience chuckling or full-blown belly laughing throughout the entire performance.

Buechele’s portrayal of Jack seemed to be a particular favorite of the audience, with his naively optimistic if slightly out-of-touch expression screaming “the lights are on but nobody’s home,” really selling the well-meaning, if a bit blundering nature of Jack’s character.

Doscher’s performance also earned major laughs, with her exaggerated expressions bringing to life a delightful and slightly unhinged Little Red Riding Hood, especially upon drawing a dagger from her cloak with devious glee.

Another particularly riotous performance was put on by Casey Ottaway ’22 and Alex Sanchez ’23, playing Rapunzel’s Prince and Cinderella’s Prince, respectively, earning near constant laughs during their performance of “Agony.” From the song’s melodramatic lyrics, to the interplay between the actors, to the over-the-top physical comedy that accompanied the scene, there was no doubt the number was a crowd favorite.

Ottaway and Sanchez’s performances in the second act’s “Agony (Reprise)” were also a series of laughs for the audience. This time around, however, it also served to give the viewer a sense of the shallow, insincere sliminess of both of these princes; they sing the same shallow “love” song about the new maidens for whom they long, before concluding simultaneously, “Ah well, back to my wife” where they had previously sung “I must have her to wife.”

The musical’s prop comedy was also a success. In particular, the interactions of the actors with “Milky White,” a wheeled prop cow, were popular with the audience. Over the course of the first act, Milky White was repeatedly pushed, pulled, lifted and even carried around the stage to the audience’s delight. The bit that received perhaps the most raucous laughter was when Buechele revealed the cow’s death by placing magnetic cartoon “X”s over its eyes, before awkwardly lifting the prop to lay it on its side. 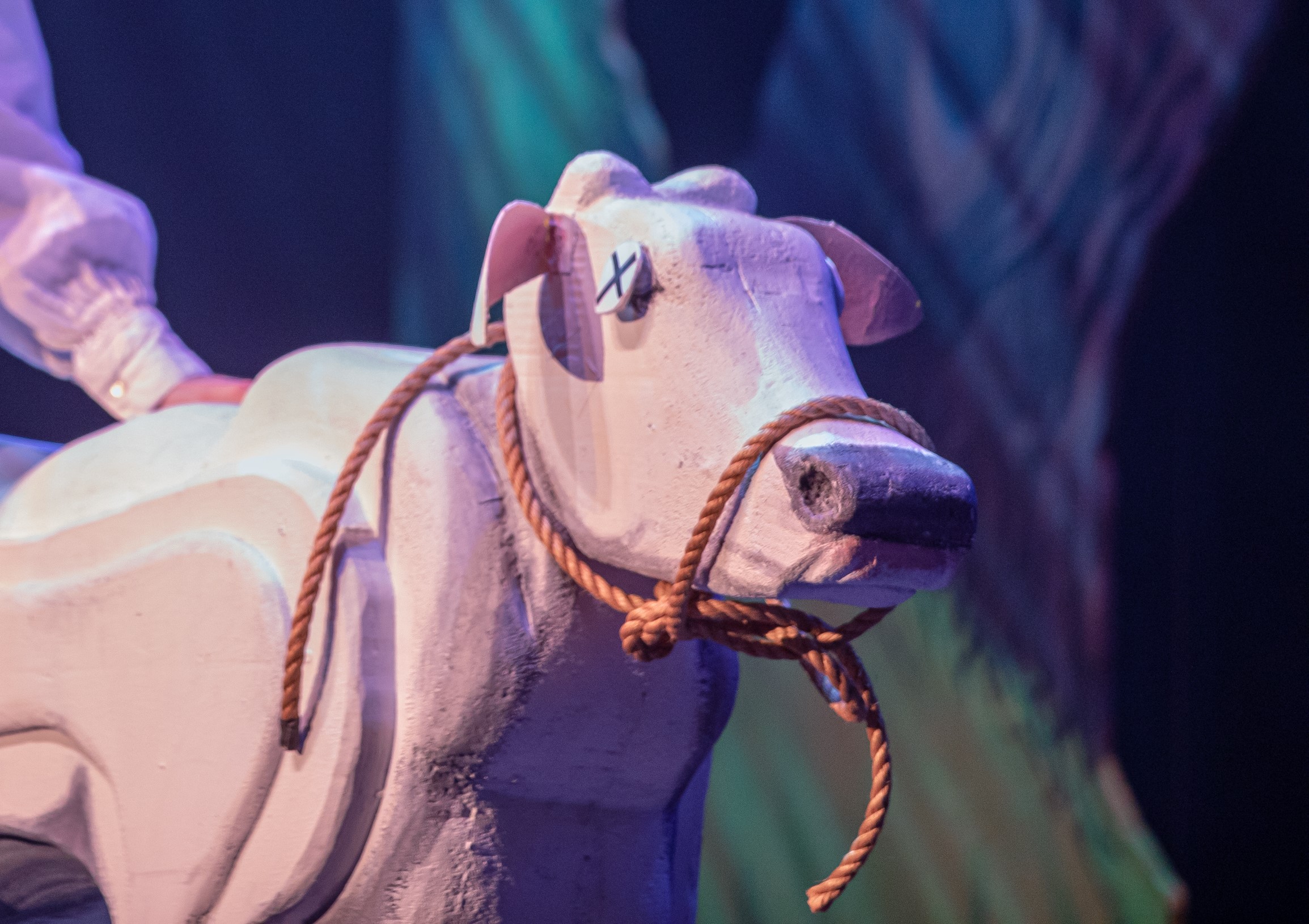 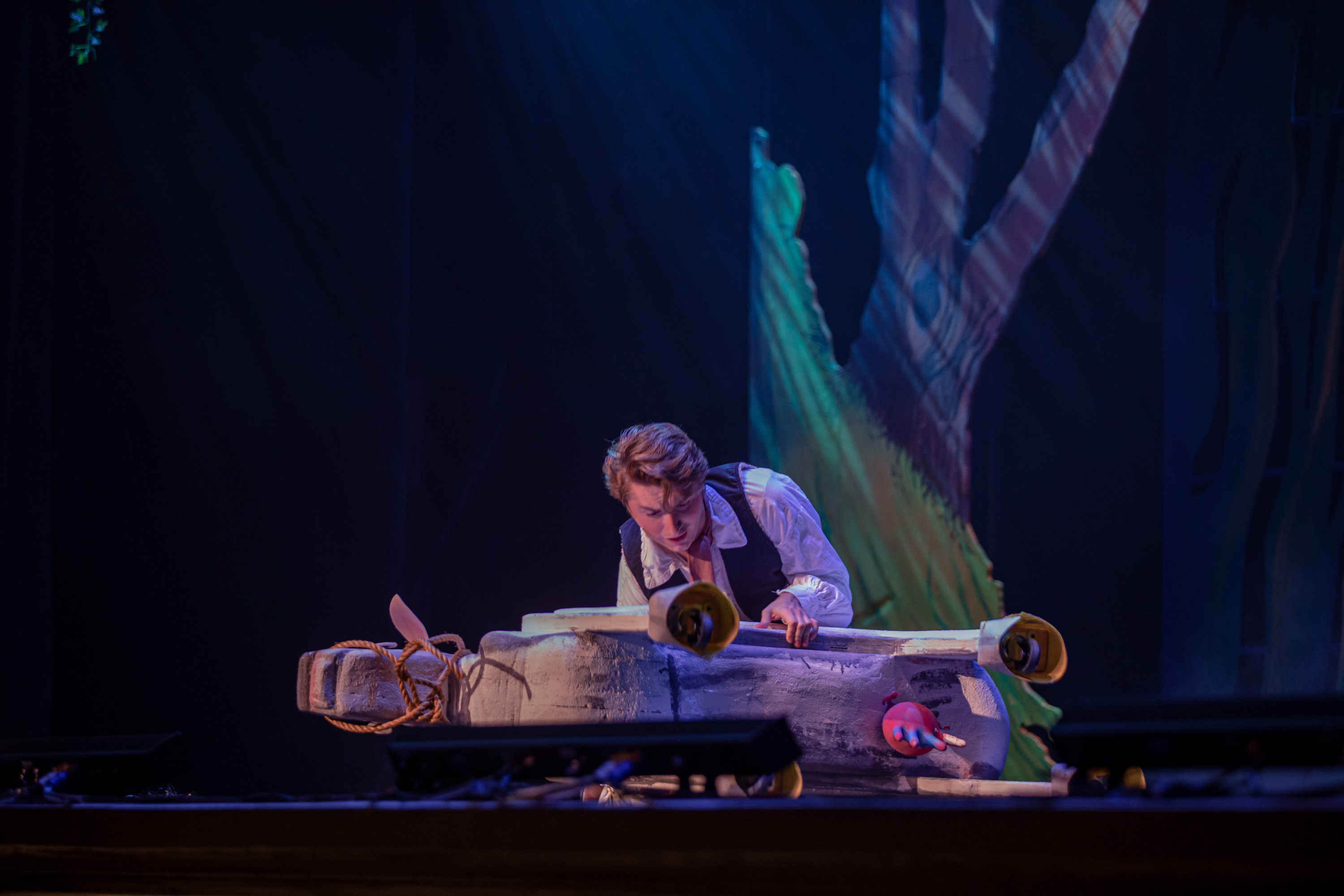 It wasn’t all jokes, though; in the second act, actions begat unintended consequences and scenes took on a much more introspective, and often dark, tone.

Perhaps the most powerful performance of the evening was put on by Anderson Gray ’23 as the Witch as she sang “Last Midnight.” A difficult song to perform both technically and expressively, Gray’s performance was effortless. She also gave a moving performance of “Stay With Me” that left the entire audience in quiet awe for multiple seconds before a resounding round of applause.

The audience was also drawn into the love between the Baker and his wife as they attempted to build a family together despite the odds against them. Charney and de Besche sold every aspect of this complex performance in their expressions, tone, and body language towards one another, a very real portrait of a couple facing adversity and loving each other through it. After his wife’s death in the second act, de Besche’s sorrowful, careful adornment of his wife’s scarf was a powerful reminder of their connection.

Special plaudits should be given to Duffy’s portrayal of Cinderella, as she embraced both Cinderella’s gentle nature and quiet self-determination so naturally you’d think she was playing herself. Her performance in “No One is Alone,” the musical’s sensitive and emotionally powerful penultimate number, was particularly moving. 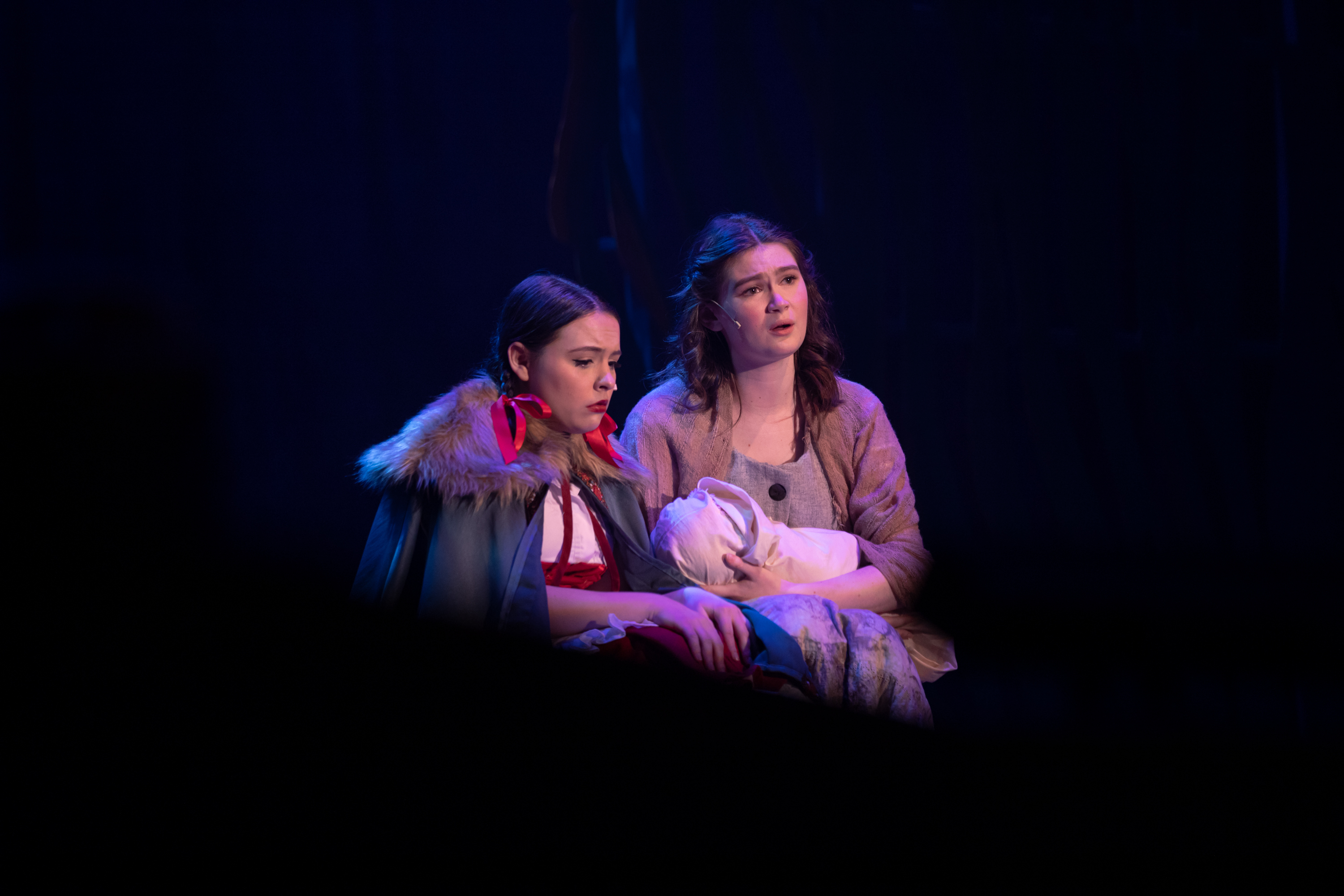 Set design was also utilized in a way that enhanced the storytelling of the performance.

When the play begins, the characters exist within their status quo, portrayed on stage as a series of vignettes, each set of characters standing in their homes and under dimmed lights, motionless. Emphasis was then placed on each of these scenes one at a time, their presence brought to the forefront through the use of spotlights as the Narrator introduced them.

As all of the characters embark on their journey into the woods, the house sets are lifted from the stage. The three vignettes were fairly downstage, making the performance area physically shallow. When the houses were removed, the entire stage became “the woods,” and the entire depth of the stage was utilized. This clever bit of staging subliminally highlighted the woods’ status as the primary setting of the musical, as it made the woods feel much larger and fuller than those in which the characters began.

Overall, the Owl and Nightingale Players’ production of “Into the Woods” was a journey well worth taking and a reminder that, as Kauffman put it, “if we listen carefully enough, we are not alone.”