Posted By Nicole DeJacimo and Anna Cincotta on Sep 5, 2020 | 0 comments 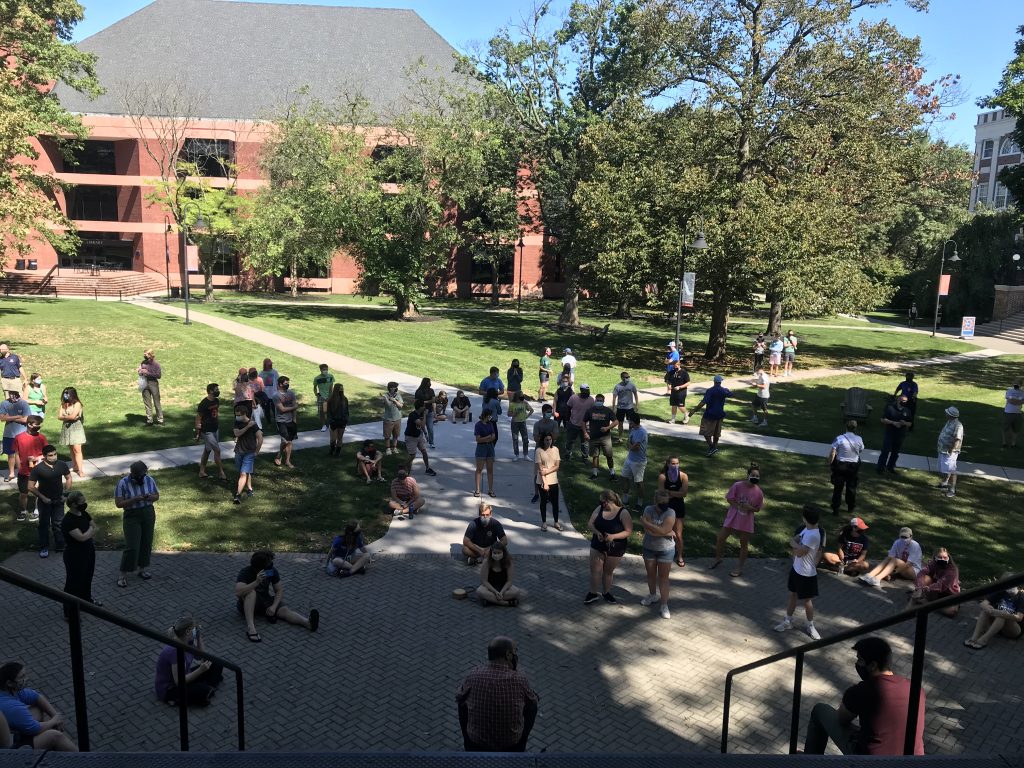 At 2:31 a.m. this morning, Conor Caruth ‘21 and Edwin Diaz ‘21 sent an email asking members of the campus community to protest the actions of Gettysburg’s administration after yesterday’s decision to send approximately 1,300 students home over the course of the next three days.

“Gettysburg College has failed us,” they explained. “We are calling all students to protest this displacement by standing their ground.” Caruth and Diaz asked students to “[remain] within their closed quarters until Gettysburg College truly decides to communicate and negotiate with its students.”

Over 100 students and parents gathered outside Penn Hall this morning after receiving this email, and President Bob Iuliano agreed to attend and listen to students’ concerns about the de-densification plan. Iuliano said that the decision to send students home was not an easy one to make, and asked students to believe that the administration came to this conclusion with the best of intentions.

“[We had] five cases in the first week, and in a matter of two weeks we had sixty plus cases,” Iuliano explained. “We were not equipped to handle that many cases in that short of a time frame.”

Many of the students who attended the protest made it clear that their main concern is the possibility of bringing COVID-19 cases back to their families and hometowns, and wondered why the college did not opt for a two-week quarantine before sending students home. Others expressed concern about being required to leave so quickly.

In response, Iuliano explained that, in retrospect, he understands that the college did not give students enough time to move out. “If any student is worried about having enough time, they are welcome to fill out a form for accommodations,” Iuliano said. He clarified that this is still an option for all students—any student who petitions to stay on campus will be permitted to stay until College Life responds.

He also highlighted the administration’s concern about the mental health and overall well-being of students if they had been told to quarantine in their rooms for a full two weeks before going home.

A few seniors demonstrated their disappointment after learning that only First-Years and a select group of upperclassmen will be staying on campus for the remainder of the fall semester. Iuliano assured them that it was an academic-based judgment, and explained that most First-Years were in classes with other First-Years. This limited contact makes the residential academic experience easier to accomplish during the pandemic.

At this point, it is still too early to determine what course of action the college—and the pandemic—will take in the spring.

While most of the demonstration was orderly, there were pockets of chaos and unrest due to anger expressed by some students and parents in the crowd.

Sydney Koontz ‘22 expressed disappointment about this response from the campus community. “You can criticize and question, but you cannot insult and berate,” she said. “The blatant disrespect was not called for, and this was not meant to be a full-blown attack.”

Diaz also expressed his disappointment with the protest. “This is not the outcome we wanted,” he explained. He said that he was thankful that President Iuliano took the time to sit and speak with students. “We don’t expect a perfect experience, but I want him to work more closely with the student body in the future so we can have a say in the decision making, too.”