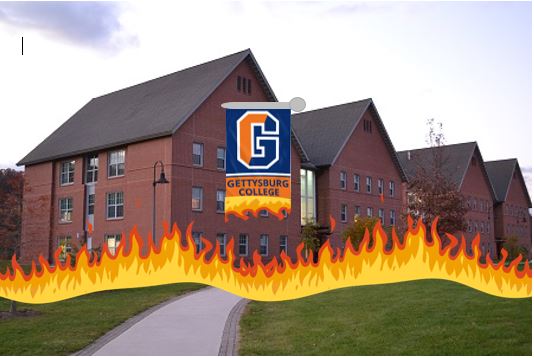 Gettysburg College campus has been eerily quiet ever since the commencement of spring break. The few dwellers near campus have been concerned about the mysterious disappearance of all the students and why they have not returned to resume their rigorous classes. After some investigation, the cause of the mass exodus of students has been determined.

At the beginning of the Spring 2020 semester, Dean Ramsey tweeted that Gettysburg College was receiving far too much money from the increase in fines students were paying because of the dangerous, flammable items they were housing in their rooms.

“Students, Gettysburg College’s surge in profits due to your disregard for the rules is simply unacceptable. As a result of this tomfoolery, I have no choice but to change the offense’s disciplinary action from a $50 fine to immediate expulsion with absolutely no exceptions. The safety of this school and its students is of the utmost importance.”

Unfortunately, students did not take Dean Ramsey’s late-night tweet seriously, and carried on decorating their rooms and houses with treacherous tapestries and incendiary incense. Dean Ramsey felt heightened security was necessary because she sensed mischief was afoot. The Department of Public Safety thoroughly swept through every inch of college’s residential buildings to uncover the culprits who threatened the safety of the school.

“These students basically left fire breathing dragons in their bedrooms when they left, and I will not permit it. I had to put my foot down!” Dean Ramsey explained.

Students are still in shock at what some feel was an intense and extreme reaction.

“I cannot believe they expelled me and confiscated my Bullets Marching Band flag,” wailed Benjamin Pontz ‘20. “All I wanted was to support my beloved orange and blue and now I cannot return and complete my last semester.”

Dean Ramsey explained in a follow-up tweet that not only was she tired of feeling disrespected by the students for their lack of adherence to fire safety regulations, but that statistics from 2019’s Annual Security and Fire Safety report demonstrate the life or death situations students are willingly exposing themselves to.

“Dorm rooms and buildings have been catching fire for years and students still do not take these perilous combustible items seriously. You would think that the 137 fires we had in students’ dorms last year would scare students into listening to this rule, but no,” Dean Ramsey exclaimed, exasperated.

College faculty and staff do not know what to do now that all the students have been expelled. They are heartbroken to see them go.

DPS Officer Pearce said, “I know all these kids by name. It is just so hard to see them go, but I have found more candles and tapestries than I know what to do with.”

“It greatly saddens me to see her go, but I could not waver for one person if I did not waver for the others,” stated Dean Ramsey, choking up as she spoke of the expulsion of Jane North from Penn Hall.

“It is so difficult to watch them leave, but I know it is in the best interest of the school.”