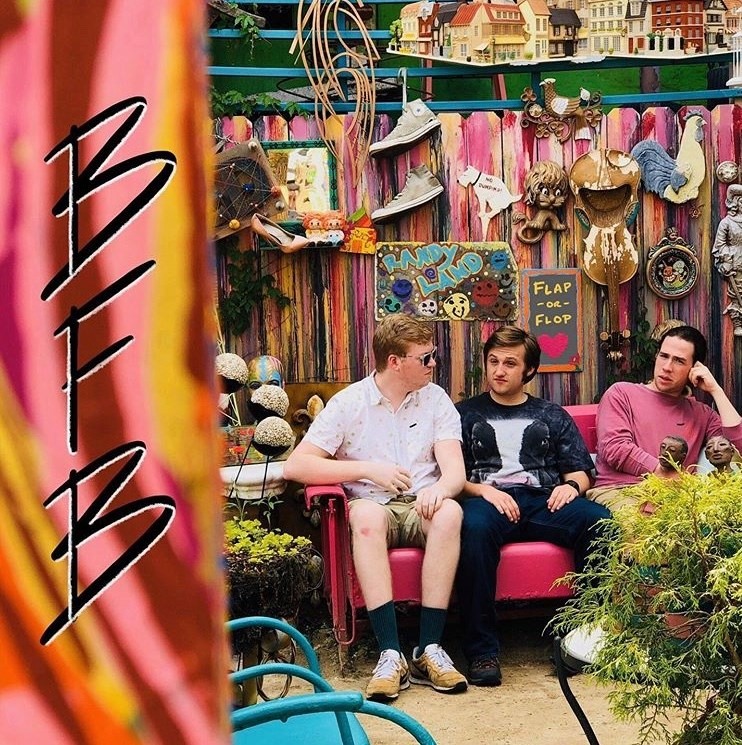 That’s the big question for the debut album by the Bad Flappin’ Birds, and a few weeks after its release, let me be the first to say: it slaps.

“Flap or Flop” carries us through ragers and ballads alike and successfully navigates a variety of musical and emotional altitudes. The album constantly surprises, but never loses momentum, riding a strong current of what can only be understood as true friendship.

I had the opportunity to talk to the Bad Flappin’ Birds about their history and their new release last Sunday afternoon over Zoom.

That’s what Steve Wojcik ‘17, Gettysburg alum and member of the Bad Flappin’ Birds, said when asked to describe their group in three words. And he couldn’t be more right. The band consists of Wojcik, along with Jacob Ryave ‘17 and Andrew (“Cowman”) Cowan ‘18.

The group dates back to 2017, when, by a series of coincidences, a friend of Ryave’s came to play a show (registered as a house event) at Humor House, where the three lived together. After days of searching for a band to play as the opener for that show, Jacob, Andrew, and Steve made a bold decision: they would be the opener.

“This was a band born out of necessity,” said Ryave. “The world needed Bad Flappin’ Birds in that moment.”

And so, Cowan, Wojcik, and Ryave, got together and wrote seven songs in four days in their garage; then, in that same garage, they performed the set as the opener for the show a week later, with Cowan on keys, Ryave on guitar, and Wojick on a drum set made up of a practice pad, a hub cap found in the Seven Eleven parking lot, and a desk lamp.

To many, that would sound like a recipe for disaster. But the Bad Flappin’ Birds were also part of Shots in the Dark, the improv comedy troupe, and they knew how to improvise.

“One of the most unique things about our writing process is we started with the titles,” said Cowan.

He went on to explain that when they decided they would be the opener, Cowan wrote down the names of the seven songs that they would write, and then they wrote those songs. Those seven songs are the very same ones that appear on the album, which the group recorded in Pittsburgh the week before Cowan’s graduation, one year later in 2018.

And so, “Flap or Flop,” a concept album about friendship, rooftops, and tigers, dropped in 2020, three years in the making.

The album opens with “Sugar Shack,” which introduces and invites us into the music and the friendship of the Bad Flappin’ Birds, followed by “Judith, in China,” a ballad that shows off the group’s capacity for sincere, narrative lyrics and moving instrumentals as it contemplates the afterlife.

The most anticipated song on the album, released as a single shortly before the album dropped, is “Tiger (Tiger Tiger) Baby.” Though tigers are enjoying a big moment in 2020, the band confirms that the song bears no relation to Tiger King, having been written three years prior, nor have they hitched themselves to that bandwagon in promoting the album.

“I don’t know why they didn’t use us in their promotion, to be honest,” said Cowan.

And with good reason. The song is an absolute rager, with a chorus that dominates by sheer force of repetition. The Bad Flappin’ Birds have me convinced: as Cowan said, “Nothing is really as cool as a tiger.”

The remaining songs have a definite narrative arc: “Climbin’ up the House,” dreamy and carefree, is immediately followed by “Slidin’ Down the Roof,” a song about consequences. “Ring, Ring, Ring, it’s the Door,” an acapella progression, finds its answer in “Just a Minute,” the friendship ballad that finishes the album.

The band’s eclectic sound has been best described as “flap rock,” a genre united around attitude more than any particular set of musical attributes. As someone new to the genre, I asked the Bad Flappin’ Birds if they could fill me in on what it means to be flap rock.

“First of all it’s a lifestyle, more than just a musical genre,” said Cowan. “It’s the way you live your life, and it’s just going where you’re taken. So Jake’s like, ‘Hey, we got a concert Saturday, we need an opener.’ Regular rock and roll might be like, ‘Oh no, what are we gonna do?’ but flap rock’s like, ‘Now, we’re the opener.’”

This is this attitude that first brought the band together, and that brings them to us today, all the way from their very own garage.

“You just do it,” said Cowan. “You kinda get thrown out of the nest, or whatever your place of safety is, and you just gotta flap or flop. And that’s what flap rock’s all about. You put the pedal to the metal and you either fly or die.”

The album is also deeply rooted in place: specifically, Humor House, the location of which will be changing in the Fall.

“This year being the last year that Gettysburg is leasing Entwistle Hall, I think that having this album is a nice piece of history with the house, because it was entirely born, raised, nurtured in that house,” said Ryave.

It may be worth noting that the house that was Humor does, in fact, have a very steep roof.

The album is also connected to a place called Randyland, an outdoor museum of found art in Pittsburgh, PA, which is featured on the album cover. Randyland is run by its founder, Randy Gilson, who, incidentally, according to Wojcik, “can see the future.” The band cites the underdog story of Randy and of Randyland itself as one of their inspirations.

“[Randy] grew up homeless, food insecure, and built this museum from the ground up from trash that he found that he would paint on,” said Ryave, “so there’s a lot of inspiration in his storytelling, with messages of ‘you can do whatever you want to do no matter what your story is, no matter what your background is,’ and while I think the three of us are very lucky that we have not grown up with those hardships, it definitely inspired us and pushed us to get this done and make this album what it is.”

Like the Bad Flappin’ Birds, Randyland has a history of seizing the moment and of making art out of ordinary things.

I admitted to the band that, knowing the three of them, my immediate response when I learned they were releasing an album was that it must be a joke. And while the album is, at many points, silly, at others, it is utterly sincere. In fact, the group found that the sincerest moments in the album were the easiest to write.

“It’s a perfect document of our friendship,” said Wojcik.

That friendship shines through the entire album, though most clearly and honestly in the last song, “Just a Minute,” which, in spite of the humor of its apparent response to “Ring, Ring, Ring (It’s the Door),” deals with friendship overcoming distance.

“Just a Minute hits hard for me right now, because I’m not with them,” said Ryave. In fact, at the time of our call, the three were each in different states.

In a moment of isolation, the sense of togetherness that drives “Flap or Flap” is all the more poignant. The writing of the album was improvised. The band’s one and only live performance in 2017 was in many ways extemporaneous. But the feeling of belonging that gives life to the album is full fledged.

I couldn’t help but ask if we could expect more from the Bad Flappin’ Birds in the future.

“You guys wanna do it?” Wojcik said. And that’s flap rock.

The band aspires to one day headline Springfest at Gettysburg College.

“Just believe in yourself,” said Cowan, to all the fans, “and you never know where you might end up, it could be a garage.”