Softball Returns to the Diamond 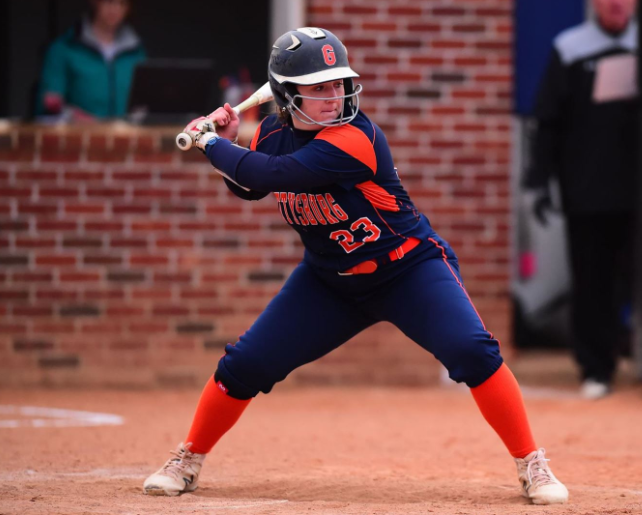 During the first game, the Bullets found themselves down 2-0 as the Mary Washington Eagles scored off a baserunner from a walk that reached home on a double. The Eagles then scored again through a sacrifice fly that scored the runner from second who advanced to third base off a wild pitch.

The Bullets struck back in the second inning, however, as sophomore catcher Shelby Baker scored and accumulated four RBIs in the third inning that included a two-run homer. A sacrifice fly by sophomore first baseman Emily Colline then put Gettysburg up 5-2 by the end of the third inning in what proved to be offensive shoot out.

The offensive onslaught sported by the Bullets, however, continued as the team scored five runs in the top of the sixth inning, including Baker and first-year shortstop Jess Campana.

First-year Olivia Moser and first-year catcher Abby Seiple recored RBIs to give the team a 13-8 lead by the end of the top of the sixth inning. During the seventh inning, Jonik managed to earn a single off a hit to center field and was able to advance to second off a groundout. Jonik scored off a single by Colline who eventually scored off a single by Baker.

This extended the Bullets lead to 15 but the team was still not finished as the inning concluded after a home run by Moser crushing a two-run homer, giving the Bullets the 17-8 lead. The Bullets held steady for the rest of the match as the only other runs scored by Mary Washington were off a two-run double in the bottom of the seventh in what proved to be an offensive shoot-out for both teams.

During the second match, the Eagles took an early 2-0 lead from runs scored in the bottom of the second and third innings. In the top of the fourth inning the Bullets came back on the board from a single by Campana that turned into a two run homer as Baker again knocked a dinger to tie the game at 2-2.

Mary Washington then responded by scoring two runs off RBIs in the bottom of the fourth to give the Bullets a 4-2 deficit. In the bottom of the sixth inning the Eagles extended their lead off of a two run homer that gave them a 6-2 lead.

Gettysburg mounted what appeared to be a comeback as a pair of RBIs from Julie, Baker, and Jonik gave the bullets a 6-5 score. But the Bullets fell short however as the final score was 6-5, allowing the Bullets to split what proved to be an offensive display and hard fought double header.

The Bullets were to continue their season and take their offensive prowess to Shenandoah on the road on Tuesday, March 3, but the game was postponed and the date and time for which it will be rescheduled remain to be determined.