Home » Sports » ‘Looking for a Coach with the Right Vision to Turn the Program Around’: College Launches Search for New Football Coach

‘Looking for a Coach with the Right Vision to Turn the Program Around’: College Launches Search for New Football Coach 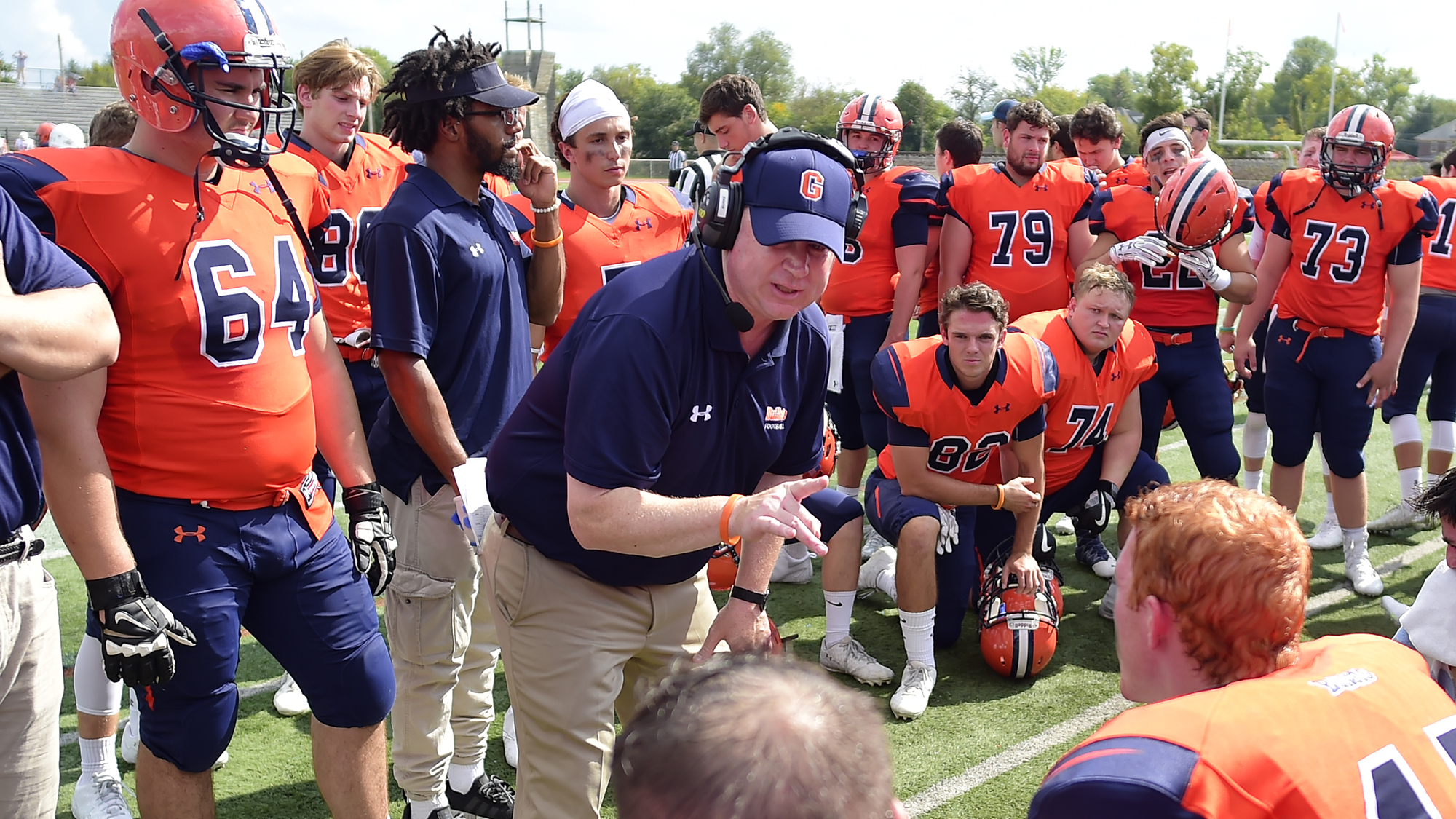 Gettysburg College has launched a search for a successor as Head Football Coach to Kevin Burke ’90, whose departure from the team was announced last week. While the college termed the personnel move a “parting [of] ways,” Burke alluded on Twitter that he had been unaware of his impending departure, implying that the day had not gone as planned.

“Some days you wake up and the day goes exactly as you planned,” Burke tweeted on Dec. 4, early the morning after his departure was announced. “Other days you wake up and everything seems to be spinning out of control. Whether yesterday was one of the worst or best days of your life, today is a new beginning.  Start fresh with hope and joy in your heart.”

Some days you wake up and the day goes exactly as you planned. Other days you wake up and everything seems to be spinning out of control. Whether yesterday was one of the worst or best days of your life, today is a new beginning. Start fresh with hope and joy in your heart.

Executive Director of Athletics Mike Mattia did not answer a question about whether the team’s on-field performance played a role in the decision not to retain Burke, and Burke did not respond to a request for comment. The team went 2-18 during Burke’s two seasons at the helm, its only two wins coming against Juniata, where Burke served as head coach from 1998 until 2003.

Mattia also did not answer a question about whether all coaches are evaluated based on their team’s on-field performance. He did, however, say that he hopes the next coach can lead a turnaround for a program whose last winning season was in 2015.

“I am looking for a coach with the right vision to turn the program around, the ability to motivate and inspire our team, and someone who can rally the whole Gettysburg football community together,” Mattia said.

Disappointment on the Field

In an interview with “On Target,” The Gettysburgian‘s podcast, before this season, Burke said that he hoped to improve on the team’s 1-9 record his first season, a record that ultimately the team replicated in 2019.

“Obviously, when you look at the overall record, that’s not what we wanted to accomplish last year,” he said. “We actually got better as the year went on, but our last four games were against playoff teams so it didn’t necessarily show up on the scoreboard. We’re really focused on improving — we want to focus on improving every single day — and we also want to focus not on thinking about winning and losing. If we can do that and just focus on the process of getting better each day and the scoreboard will eventually take care of themselves.”

He pointed to improving offensive production — particularly the passing game — and being able to “get the ball in the end zone,” quipping that “that would be really different for us,”  would be key to the team’s success in 2019.

Ultimately, the team did increase its passing production by an average of 44 yards per game and increased its average points per game from 12 to 13.9, but opponents scored an average of 45.6 points in 2019 as compared to 36.8 in 2018. Overall, the team was outscored 456-139 on the season and lost seven games by more than 30 points including a 55-7 loss in the season finale at the hands of Franklin & Marshall and a 63-7 loss to Johns Hopkins.

The Gettysburgian reached out to a number of current and former players, none of whom would comment on the record about Burke’s tenure with the team or departure.

Burke took the head coaching job at Gettysburg in 2017 from his mentor, 38-year veteran Barry Streeter, after 14 seasons as Streeter’s offensive coordinator. Burke recalled in an interview shortly after his appointment that, during his senior year of college, Streeter asked him what he wanted to do with his life, and Burke replied that he wanted Streeter’s job.

“Every coach aspires to coach at their alma mater,” he said. “It’s just a tremendous experience.”

When Burke was hired two years ago, the decision was announced in December, allowing time before the early decision deadline for Burke to jump in on recruiting. Applications for the position are due Jan. 3, 2020, and Mattia said he hopes to have someone in place sometime in February, by which time that deadline will have passed.

Current co-defensive coordinator Mike Hoyt, who was previously the head coach at Centennial Conference rival McDaniel College, is the interim head coach and is responsible for the program’s day-to-day operations. Last weekend, the team hosted a group of recruits.

“The incredible educational experience, enhanced by the opportunity to compete in a nationally competitive conference, coupled with the social, cultural, and historic environment that Gettysburg has to offer, will always attract a wide variety of academically and athletically talented prospects regardless of who our head coach is,” he said.

While a new head coach is the first step, Mattia signaled that, no matter who is hired, having a new coach will not be a panacea.

“In this time of transition we need all of our alumni, families, and fans of Gettysburg football to rally together and support this program now more than ever,” he said. “A new head coach alone is not going to help turn this program around by himself.  It is going to take a collective effort by the whole Bullets football community.”

Mattia did thank Burke for his efforts during his 16 seasons with the program and two as head coach.

“Coach Burke always conducted himself with character and integrity on and off the field as our head coach,” Mattia said. “I thank him for his efforts and devotion to the Gettysburg football program.  He dedicated himself to the student-athletes. I wish him all of the best in the next phase of his career.”