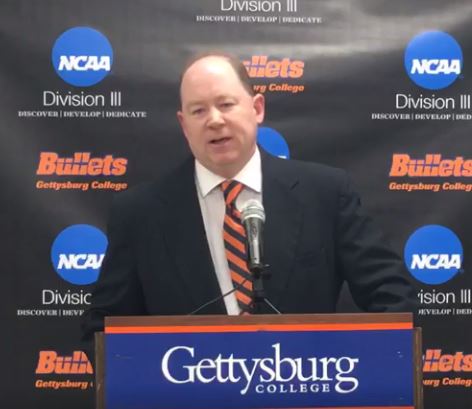 When Barry Streeter announced his impending retirement earlier this fall after 42 years with the college, including 39 as head football coach, Assistant Vice President of Athletics David Wright said that Streeter, the college’s all-time winningest football coach with 196 victories, would be “virtually impossible to replace.”

Football will still be played next fall, however, and the team needed a new coach; it was Wright who announced via Facebook Live Thursday afternoon that Kevin Burke ’90 would be that new coach.

Burke, who has served as associate head coach, offensive coordinator, and offensive line coach for the past 14 seasons, previously was head coach at Juniata College from 1998 until 2003. He graduated from Gettysburg in 1990 with a degree in history and played football and participated in track and field all four years.

“This was my dream job,” Burke said during his opening press conference.

Prior to announcing Burke, Wright said that the college conducted a national search that was narrowed to six candidates for phone interviews and then to four candidates who visited campus for in-person interviews. A variety of college personnel including President Janet Morgan Riggs participated in the process.

Burke said that his interview with current players was, by far, the hardest, but that he was extremely impressed with their commitment to the process and with the hard work and resilience he saw them display all season.

Burke’s specific agenda items include conducting a top-to-bottom review of every aspect of the football program, developing stronger connections with alumni to enlist their help in recruiting and supporting the program, and further building a fanbase. To that end, he announced the creation of team Facebook, Twitter, and Instagram accounts.

In total, 20 seniors will graduate this year including quarterback Justin Davidov, wingback Ryan Thompson, wide receiver Ty Abdul-Karim, and tight end Andrew Major, leaving plenty of opportunities for new beginnings, particularly on offense. Burke expressed confidence in the returning players, however, to build the core of a program he expects to compete from day one.

“Whether it’s the heat of the first game when it’s 95 degrees or it’s a little chill in the air in November, there’s nothing like it, there’s nothing like gameday,” Burke said with palpable excitement towards the end of the press conference, “and what we need to do is we need to get those stands filled. We need to get Shirk Field at Musselman Stadium rocking every home Saturday, and that’s what excites me.”