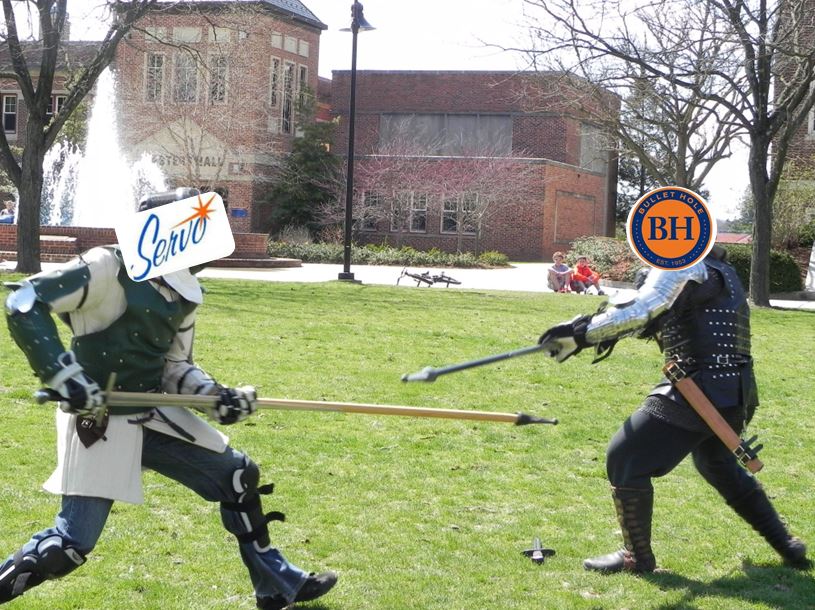 The Gettysburgian previously published an article establishing which food items at The Bullet Hole were considered sides. However, employee’s side choices have remained different than those offered to students. Due to this discrepancy and the long-heated debate over which fine dining establishment is better, Servo or The Bullet Hole, a fight broke out on Gettysburg College campus this past week.

The mounting hostility came to a brutally violent fruition when Regina attempted to purchase her Veggie and Hummus Cup at the register in Bullet as a side.

“I tried to explain that the Veggie and Hummus Cup is not a side for employees, and that is when the explosion happened,” recalled Paula.

The beloved Servo worker became irate that after all the love and advice that she had offered to her Gettysburg College students over the years, she could not get a Veggie and Hummus Cup as a side.

“This is an outrage!” exclaimed Regina, slamming the Veggie and Hummus Cup into the smooth marble countertop. “I have put my heart and soul into swiping these students in to eat their meals, and I cannot believe this mistreatment.”

Regina demanded that she be given the Veggie and Hummus Cup as a side, that it was her right as a Gettysburg College employee.

“I told her that I do not make the rules, but I must enforce them. And then she cried out ‘Let’s take this outside!’ I had no choice but to run after her, as she had still not paid for her Veggie and Hummus Cup!” explained Paula.

The two iconic Gettysburg College Dining Services’ workers tore out the College Union Building and down the steps, Paula hot on Regina’s trail. They dashed onto Stine Lake and raced to the center of the once peaceful, grassy plain.

Regina abruptly spun around to face Paula and proclaimed, “I challenge thee… to a duel!”

Students stopped in their tracks to take in the historic moment, realizing that this would be second only to the Battle of Gettysburg.

“Before I had a chance to say anything, students were already choosing sides and cheering for their favorite competitor. I couldn’t let down my fans, I had no choice but to accept the challenge,” admitted Paula.

Two students emerged from the crowd and offered two Nerf guns. “Long Live Queen Regina!” they shouted, handing them over.

As the students melted into the crowd, chanting and screaming began to rival that of fraternity brothers at a game of beer pong.

“We don’t call you Right Hook Regina for nothing! Go Regina!”

As the now infamous women began to dramatically pace ten feet away from one another, the crowd quieted, and sucked in one collective breath.

What started with a Veggie and Hummus Cup now came down to this, Paula or Regina, The Bullet Hole or Servo. The women whipped around to face one another as one, rushing each other simultaneously, as if the violence was a choreographed dance.

Both women collapsed to the ground, with Regina only nursing a flesh wound to the arm, but her opponent suffering from a gut shot.

After what felt life a lifetime, Regina stood, brushed off the mud and fertilizer pebbles from her Servo uniform, and limped over to Paula.

Cowering in the shadow of Regina’s looming figure, Paula choked out, “But can’t we just be co-existing legends?”

Regina stared at Paula, stood in thought for what seemed an eternity, and then slowly reached out her hand to aid her opponent. Standing side by side, Regina began to speak to the masses that now stood on every surface of Gettysburg College, from sidewalk to rooftop, trying to get a peek at the action on the historic day.

“Legends should not feel threatened by one another but help one another. From this day forward, we shall be the best of friends!” proclaimed Regina with her arm around Paula’s shoulders.

The crowd burst into jubilant cheers with some students even weeping tears of joy. Finally, the student body’s two favorite Dining Services’ workers were no longer feuding.

All was well once more on Gettysburg College campus.