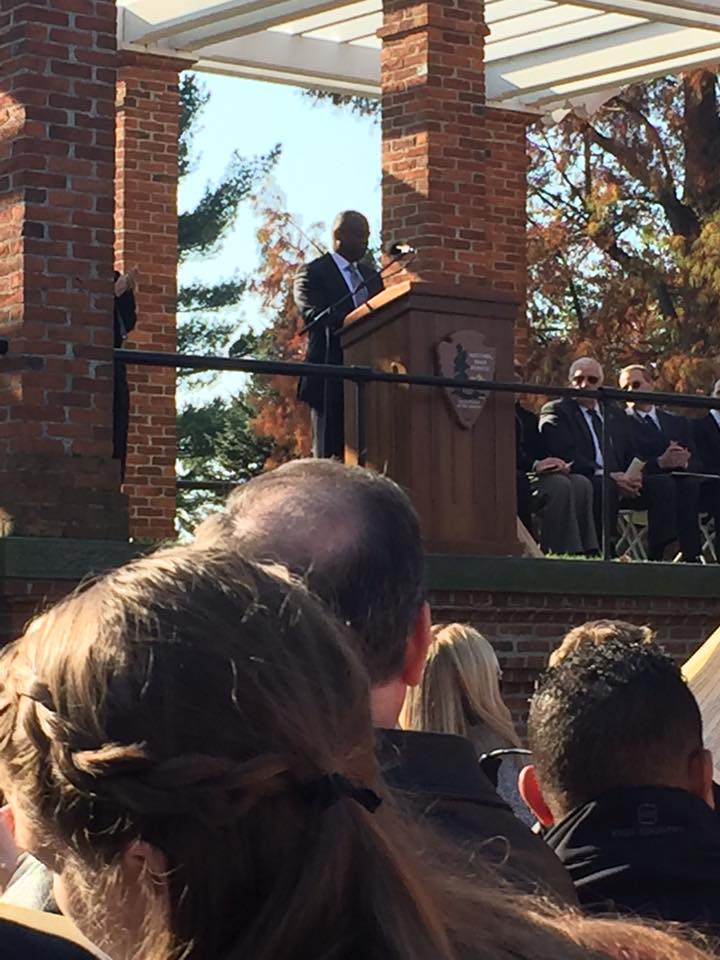 On November 19, a crowd of reenactors, community members, and Civil War enthusiasts gathered at Soldiers’ National Cemetery to commemorate the 153rd anniversary of Lincoln’s Gettysburg Address. Following a wreath-laying ceremony at Soldiers’ National Monument and music by the Gettysburg High School brass band, the Dedication Day program began at the rostrum at 10 a.m. with opening remarks about adherence to Lincoln’s ideals by emcee Wendy Allen, vice president of the Lincoln Fellowship of Pennsylvania. The program featured remarks from keynote speaker LeVar Burton and a naturalization ceremony for 17 new citizens.

An opening invocation was delivered by Anthony Stultz, professor of Buddhist studies at the Graduate Theological Foundation and founder of the Blue Mountain Lotus Society. Stultz tied Lincoln’s message to the current political climate in America, calling upon the audience to promote healing action and move beyond fear in order to “behold the ultimate measure of a human being.”

In attendance at the ceremony were the mayor of Gettysburg, the assistant press secretary of the White House, and two descendants of Edward Everett, a speaker at the original dedication of the cemetery in 1863.

Gettysburg College president Janet Morgan Riggs spoke briefly about alumnus David Wills who hosted president Lincoln at his home the night before he delivered the Gettysburg Address and the traditional first-year walk, which Riggs described as a defining moment in students’ lives. Riggs made no mention of the student protests against hate speech and intolerance that have occurred in the last week.

Also preceding LeVar Burton’s keynote speech was Ed Clark, superintendent of Gettysburg National Military Park, who addressed the new citizens awaiting naturalization, encouraging them to study history and take upon themselves the burden of preservation. “Starting today, the legacy of Gettysburg is yours,” said Clark. Clark drew sounds of disapproval from a few audience members when he conveyed his gratitude that there were not many “Lincoln-shaped” women in the audience.

Burton began his speech by expressing his desire to share what had been on his mind as of late, saying, “recent events in America have caused my heart to be disquieted.” He described an internal turmoil similar to that faced by Lincoln with race, class, and economics at the forefront of a conflict defined by anger and a lack of trust. “We are indeed a house divided,” Burton said; “the promise of America has yet to deliver to all her children.”

Burton described the current political climate of America to be “a crisis that truly has the power to tear us asunder,” asserting the existence of a chasm not so pronounced since the Civil War. He described the “duality of identity” in which Americans so proudly defend freedom but remain apathetic on the issue of slavery, citing the Japanese internment camps of WWII and the oppression of people of color by means of legislation.

Throughout his speech Burton repeated the phrase, “what part of ‘all men are created equal’ have I failed to understand?”

Burton emphasized the importance of education by describing his mother, a lover of language who earned an English degree at age 19 and continued her studies while working full-time as a social worker and raising three children by herself. “In my house, you either read a book or you were hit in the head with one,” said Burton. He described education as a tool to compete with “melanin challenged classmates,” a comment that drew laughter from the audience.

Burton concluded his speech with a powerful invocation: “The way forward is clear, America.” He warned that if we do not shape our society to reflect the idea that all men and women are created equal–another comment that received enthusiastic applause–then the Gettysburg dead will have indeed died in vain. “I pray we find courage and conviction to heed Lincoln’s sage advice,” he said.

After his speech Burton was presented with a flag that had flown over the cemetery the previous day in a wooden case made from a tree that witnessed the battle. Burton held the case over his head and called out for the reenactors of the 54th Massachusetts regiment, one of the first official African American regiments of the Civil War. The reenactors responded with enthusiasm.

Following the keynote speech George Buss, a Lincoln impersonator, recited the Gettysburg Address, and 17 candidates for citizenship from 11 different countries were naturalized.