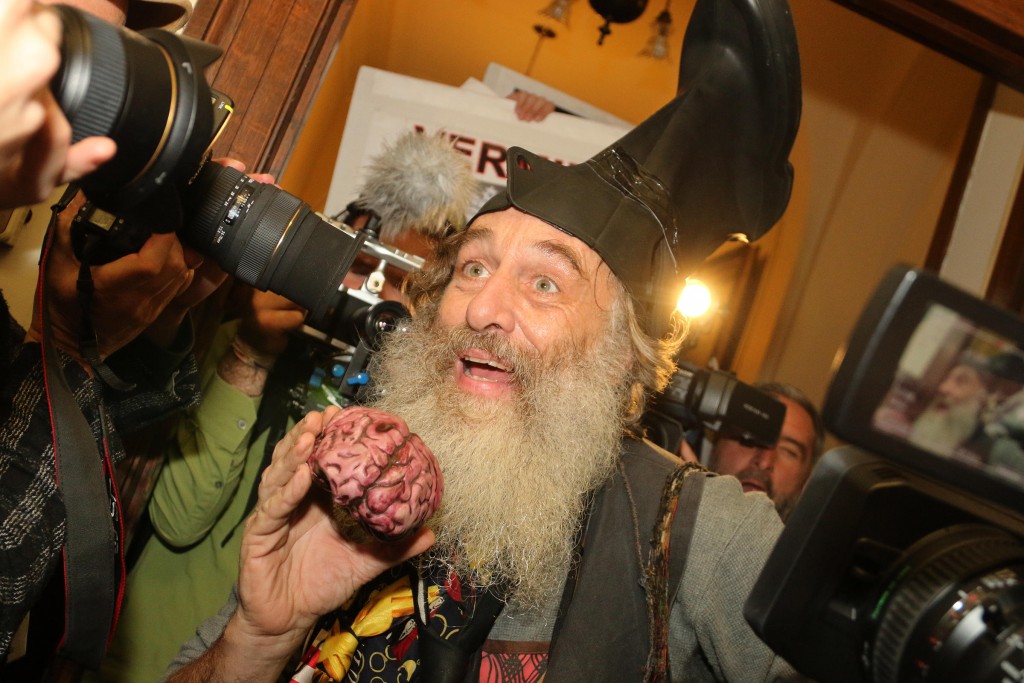 To the shock of many on campus, Vermin Supreme, a popular free-speech advocate, visited Gettysburg Thursday, April 14. In the early afternoon, Mr. Supreme frolicked across Stine Lake, tossing around a free-speech ball.

That evening, Vermin Supreme delivered an undoubtedly unique guest lecture entitled “Can We Take a Joke?” His lecture seemed to pivot around this question. To start the evening, all in attendance rose from their seats to honor his delivery of the national anthem which featured megaphone feedback and scarcely a quarter of the song’s words. He then continued, “Four score and seven ponies ago…” as a reference to his popular pony identification program.

In regular Vermin fashion, he continued with his satiric mandatory teeth-brushing law.

After heavy doses of satire, Mr. Supreme grew more serious, stating that the First Amendment is what unites Americans. Going further, he said that the First Amendment is his “shield” that allows him to continue his antics. Vermin then admitted that free speech is not limitless. He cited that yelling “FIRE” in a packed movie theater presents a clear and present danger.

Vermin Supreme then simplistically described why colleges would limit free speech on campuses. He listed several reasons: keeping order, creating a comfortable academic environment, upholding standards and protecting students from discrimination. He then described the Free Speech Movement at the University of California Berkeley. Vermin described the unifying force between campus liberals and conservatives when campus officials attempted to restrict political activism near the intersection of Bancroft and Telegraph Avenues.

Mr. Supreme then provided a quote from Barack Obama: “I’ve heard some college campuses where they don’t want to have a guest speaker who is too conservative or they don’t want to read a book if it has language that is offensive to African-Americans or somehow sends a demeaning signal towards women. I gotta tell you I don’t agree with that either. I don’t agree that you, when you become students at colleges, have to be coddled and protected from different points of view.”

As if sensing that he had grown too serious, Vermin Supreme declared, “And he shakes hands with ponies!” while presenting a picture of Barack Obama shaking hands with a man in a horse mask.

His lecture then continued with a disturbing call and response session about a “psycho-kitty” and an impertinent poem about Jesus:

“Jesus had a dinosaur–he loved him like a [insert explicative]. Dino ruled the earth before the virgin birth.”

After a bout of chanting Vermin Supreme gave some insight on “Ponynomics.” Here is a brief version of his argument for a pony based economy: ponies can be currency, debt is currency, ponies can debt, pony debt can form a bubble and this bubble will never stop growing and will be unable to pop.

Setting aside his playful façade Mr. Supreme explained his rationale behind satire with a video clip. At the 2012 DNC Convention, a group of protesters were holding signs picturing larger-than-life mangled fetuses. These signs had one purpose: to trigger an emotional response. Vermin decided to trigger an emotional response, too, so he found a “McRib is back” sign and began protesting beside the prolife activists. He shouted that McDonald’s was using steroid-induced giant fetuses to make their McRib. Mr. Supreme pointed out that it would have been impossible to have a rational debate with those protesters, so he grappled with them in the only way possible: satire.

The floor was then opened for questions. How should global nuclear disarmament be handled? “Disarmament through deployment.” Is Ted Cruz the Zodiac Killer? “I am willing to go along with that.” How do you recommend brushing one’s teeth? “Do whatever feels right.” Should one wet the tooth brush before or after adding toothpaste? “Yes.” How would you guarantee an equine-able distribution of wealth with ponynomics? “Commy.” Will Mexico pay for the free ponies? “Yeah Baby, you the man!”

The final moments of the lecture were dominated by Vermin Supreme’s graphic narration of a pony erotica novel reminiscent of Planet of the Apes. While the audience sat in stunned silence, Vermin’s earlier quote came to mind: “Sometimes it is better to practice free speech than to explicate.”