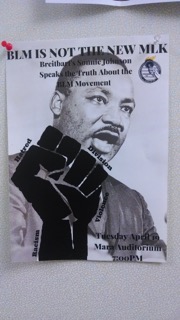 On Tuesday, April 19 Sonnie Johnson, a Tea Party activist and guest speaker for Fox News, presented a lecture which was supposed to discuss the “myth of the Black Lives Matter movement.” However, her talking points hit every base but the topic that was advertised: socialism, communism, capitalism and an uninformed view, in my opinion, of freedom in America. She began the discussion with a history of the black community:

“After the Civil War was one of the most productive times in American history for black people… [During the Wilson presidency], blacks had so much money [that] they were able to send their kids to Europe…Since the last 60 years, [Democrats] have taken over almost every majority black city in this country. While we weren’t paying attention, while we thought they weren’t moving as viciously as they are, every single one of them now is under Democratic control…If [Donald Trump] gets picked as the candidate, he will win the largest portion of the black vote of any Republican in the last sixty years.”

The lecture hosted by YAF (Young Americans for Freedom) dehumanized the purpose of the Black Lives Matter movement. The post-Civil War era was definitely not a productive period for the black community. Read a book, Johnson. From my understanding, within a couple of decades after the Reconstruction Period, racism and discrimination in America did not dissipate. African Americans were excluded from voting; Southern states passed Jim Crow laws that segregated blacks from whites; blacks lived, and continue to live, under a constant threat of violence. There is a reason why over 90% of African Americans consistently vote Democrat. There is a reason why Donald Trump receives a pathetically small part of the black vote. The Democratic Party offers opportunity, something that is now lacking within the Republican political base.

Johnson then briefly tapped into what the lecture was supposed to cover, although completely contradicting the purpose of the event:

“There is no myth. They are alive, they are well, they’re kicking, and they’re kicking Republican and conservative butt. And, nothing about that is a myth. Black Lives Matter is nothing but the continuation of Martin Luther King Jr…now we’re just in the next generation of it…If we don’t learn how to fight them and stop them, they are going to win…I know that other side of America. I know what it’s like to go to failing schools. I know what it’s like to live in a ghetto. I don’t want to conserve that. That needs to be destroyed…and replaced with free enterprise…and freedom.”

First of all, I don’t understand why Johnson would try to stop a movement that fights for the civil rights of black Americans. If her platform truly does stand for freedom (and not the monetary freedom that she focused on), then the Black Lives Matter movement should not be viewed as some brute force attempting to divide people. Its goal is the exact opposite: to bring both white and black people together as equals, to educate about white privilege, to rid of the injustices inflicted upon the black community and to create a unique movement that solely defends the freedoms of blacks.

Yes, Black Lives Matter is an extension of what Martin Luther King preached. Their message comes from a desire for the world to rise out of the mindset from generations of hatred, violence, and exploitation that still persists today. Another thing I can’t wrap my head around is the fact that Johnson was indifferent and apathetic to other people’s situations. If she attended failing schools, if she experienced living in a ghetto, then she should realize and be sensitive to the fact that these inner-city schools cannot be improved if money is not localized to these areas. Freedom cannot be bought; freedom cannot be sold. It must be provided to those living in poverty through monetary and health support as an opportunity to level the playing field. What Johnson believes is a false perception of reality, one which only stems from insensitivity, ignorance and misunderstanding.

Johnson answered, “Do you have a phone? Then, why couldn’t you?”

The same student asked another question: “You said your whole platform is based on freedom. So can you explain to me how freedom and conservative ideologies work? Because, from my standpoint, all I can see is anti-gay marriage, anti-abortion anti-immigration.”

This “I don’t care” attitude shows that some conservatives, including Johnson, don’t make an effort to care if it doesn’t affect them. This kind of thinking doesn’t spark progress; it only prevents individuals from acquiring the freedom and the rights they deserve. Perhaps Ms. Johnson, at your next job interview, you can show them your iPhone 6 instead of a college diploma and see what happens.