New Age for the King of Horror: Review of Stephen King’s “Fairy Tale” 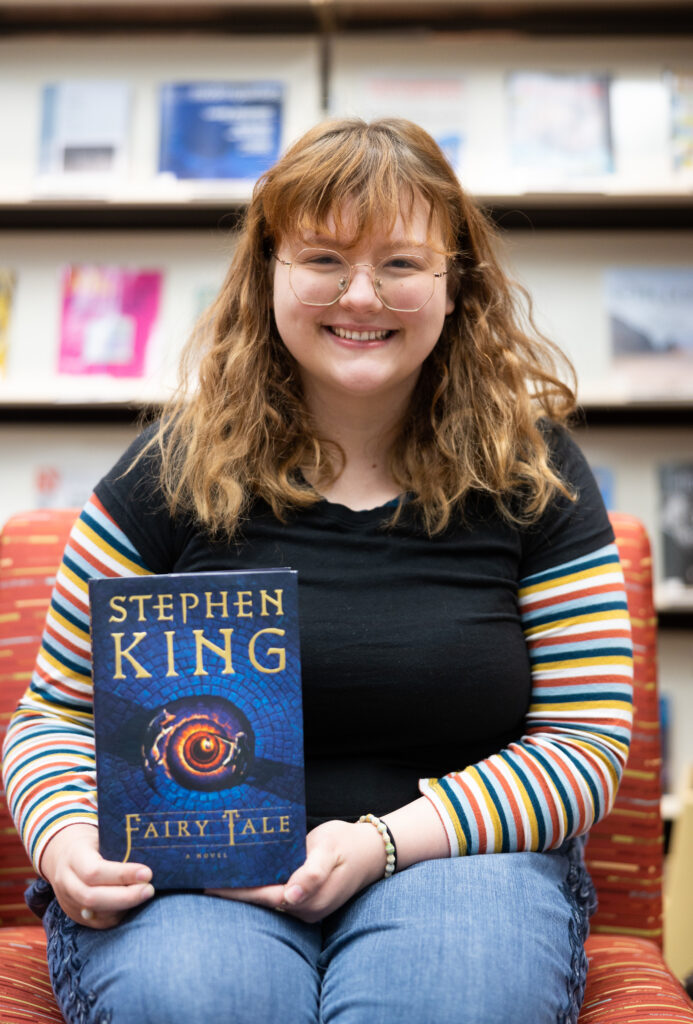 Stephen King’s newest novel “Fairy Tale” follows Charlie Reade, a high school athlete, through his, sometimes troubling, life. Charlie was ten when his mother was killed in a hit-and-run which drove his father to alcoholism. While his father searched for sobriety, Charlie gets mixed up with the wrong people, causing him to feel intense guilt over his wrongdoings. In the name of repenting his misdeeds, he aids his elderly neighbor Howard Bowditch after he has an accident when trying to clean the gutters. What was meant to be a short-term act of kindness blossoms into a complicated friendship between the pair and Bowditch’s beloved dog, Radar. In true King fashion, Bowditch is not what he seems. There is a mysterious noise in the shed and a pail of gold pellets in his safe, all begging the question: What is that old man hiding? He succumbs to a heart attack before Charlie is able to learn his bizarre past, but he has left tell-all tapes with all the answers: his past, the shed, and, yes, the gold.

“Fairy Tale” has spent nine weeks on the New York Times Best Seller list, showing that Stephen King is still the King, though the novel differs from anything else he has written. On his website, King says that early in the pandemic he asked himself, “What could you write that would make you happy?” The question perfectly encapsulates the work; this is a feel-good book filled with King’s mystic imagination and addicting writing. His breakaway from tortured protagonists into a work surrounded by the mystic imagination based on stories readers will remember from childhood showcases a limitless variety of King’s craft.

The father-son relationship is heartwarming and relieving to read, especially in King’s portfolio, of abusive and murderous male characters. Readers are welcomed into the Reade household and feel the warmth and love in the little family. The narrative is built on the foundation of the father’s grief-induced alcoholism. The loss of the mother comes in true Disney-storytelling fashion. I wish that there was a larger focus on the father-son relationship part from the first third of the novel, especially after the death of Bowditch, a substitute grandfather figure.

The familiar fairy tale aspects of the story are reinvented in the modern age, though I feel the cliches can fall flat. While the novel is inventive and authentic, the focus on historical fairy tales feels predictable, especially at the beginning of the novel. There are constant references to Jack and the Beanstalk and Rumpelstiltskin. While this can be argued to be the motivation of the story, there is a point where the reader loses interest. Stephen King carries a higher expectation of narrative unpredictability as he is the founder of dozens of amazing stories that bled their way into popular culture, becoming these recognizable cult classics. By having a novel on the basis of stories already within the popular consciousness of audiences, King is setting up a higher expectation of working outside of the stereotype, one that can happen to fall flat.

Fans of Stephen King come running to read any new work from the master of fiction. The household name has saturated the market for decades, leading to high expectations and a lifelong battle with past success. Tried and true fanatics will be happy to find a new wave of heartwarming literature with the well-loved King characteristics. The novel is set apart from the rest of his portfolio, indicating a shift in his own take on narrative purpose from his older works. If you want what King is known for, start elsewhere. If you want something new from the undeniable best-selling horror author of our generation, you’ll find it in “Fairy Tale.”
This article originally appeared on page 22 of the December 2022 edition of The Gettysburgian’s magazine.

Mikelyn Britt ’23 is the Opinions Editor of The Gettysburgian. She formerly worked as a staff writer for the features and opinion sections. She is an English with a writing concentration major and a peace and justice studies minor. Outside of the Gettysburgian, Mikelyn is a member of SASA (Students Against Sexual Assault) and worked as an intern for the Union County Food Hub on communications and marketing for fighting food insecurity in Pennsylvania. In her free time, Mikelyn enjoys traveling, writing, and working as a preschool assistant teacher.