On Friday, the Gender and Sexuality Resource Center (GSRC) hosted its annual Trans Day of Remembrance Vigil to honor transgender lives lost this year due to violence and hate. Trans Day of Remembrance (TDOR) began in 1999 to honor Rita Hester, a transgender woman who was brutally murdered the year prior. Following 1999, communities across the country have held candlelight vigils to remember the trans lives lost to violence each year.

The GSRC’s vigil began at 4 p.m. and was hosted in Glatfelter Lodge. They provided candles, flags, and flowers to hold for attendees while the ceremony took place.

The crowd was welcomed by the Director of the GSRC Amanda Del Gaudio who spoke about the importance of TDOR. Del Gaudio and Danae Madama ’25 read out the passed individual’s names and hometowns. Following the dedication of names, a moment of silence was held.

The names, photos, and descriptions of the transgender people who died were also posted on the wall and in binders for people to look through and garner a better sense of those lost. 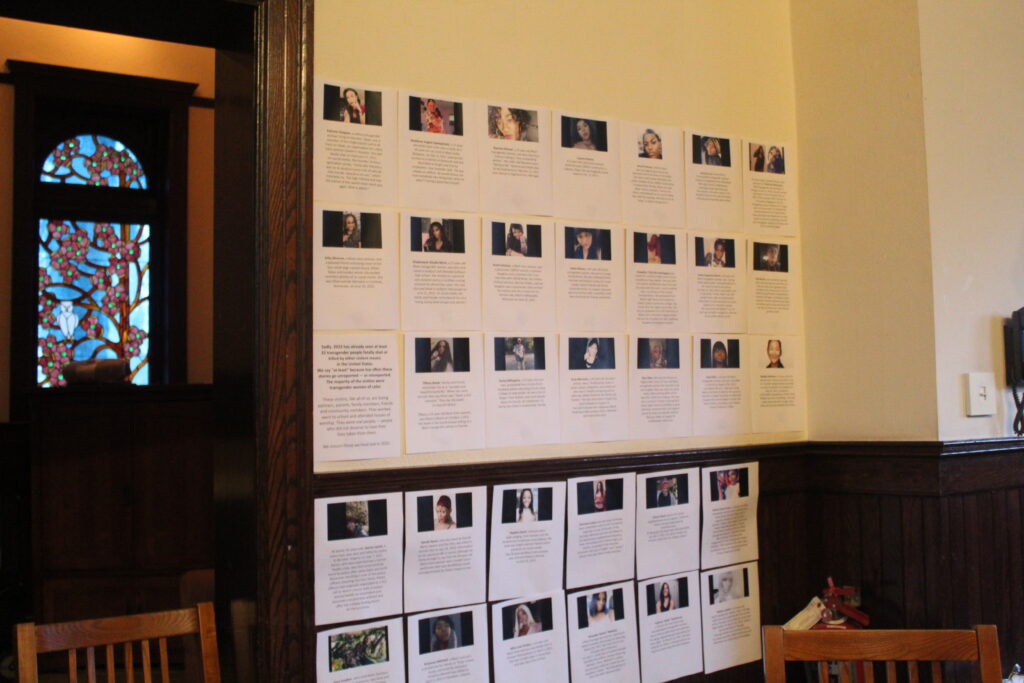 The crowd was then invited to make ribbons with the names of the transgender people who lost their lives. The GSRC provided stickers with those names and the transgender flag. Participants could then add those stickers to sheer blue or pink ribbons.

The crowd then moved outside to the Peace Pole where they tied the ribbons onto the pole. People also added the transgender flag and flowers with the transgender colors of blue, pink, and white.

After the ribbon tying, the group moved back into Glatfelter Lodge to congregate and enjoy refreshments. Many people spoke of the importance of TDOR.

“I think it’s important to acknowledge how many trans folks worldwide are victims of violence and to look at the numbers and think about what’s going on with how much violence is prevalent, and how often those numbers are often underreported or misreported,” said Del Gaudio. “It’s also important that we celebrate the life of folks who were murdered and bring awareness to trans identities in general. To celebrate trans lives and trans joy and cheer on the trans community on our campus. So the vigil is something we do annually to make sure we are acknowledging that.”

“With this being my first Trans Day of Remembrance at Gettysburg College, it was great to see the outpour of love from students, faculty, and staff that were able to attend despite it being right before [Thanksgiving] break,” said Dean Garcia. “Events like this, while sad, do give us an opportunity to really raise awareness and bring a sense of importance to such a difficult topic, as well as help folks that might share this marginalized identity to feel that they’re just as cared for and loved in our community as those who have dominant identities.”

Residential Life Coordinator Gray Reid added, “The vigil has such deep significance and the increasing numbers of the trans individuals who have been killed are proof to show that the fight for equality isn’t over and I feel for those who have lost their loved ones due to violence.”

A number of students also attended the vigil and expressed how significant it was to them.

“[The vigil] was powerful and moving,” said Journey Moore ’23. 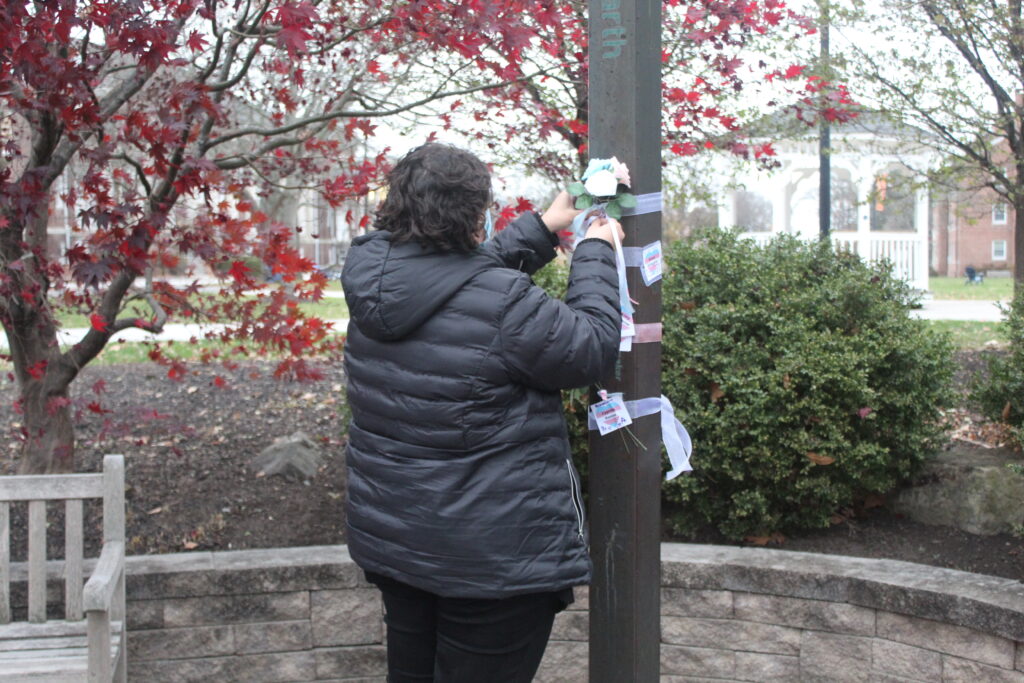 A student ties ribbon to the Peace Pole for Trans Day of Remembrance on Nov. 18, 2022 (Photo Annie Bolenbaugh/The Gettysburgian)

Nate Schneller ’24 commented, “I feel like it is really important to be here and to participate in this kind of event. As an ally of the trans community, I think it is important to stand up for trans people, especially in our current climate and all the dangers and oppression that trans people face. I think that we have to very much stand up with them.”

Students and staff who were unable to attend the vigil but would still like to participate in TDOR are welcome to go to the GSRC in Apple Hall from noon to 9 p.m. over the weekend, where they can take supplies to make ribbons for the Peace Pole.