Gettysburg Sports in the Last Ten Years: Why Women’s Lacrosse is the College’s Best Team in Recent History

Home » Magazine » Gettysburg Sports in the Last Ten Years: Why Women’s Lacrosse is the College’s Best Team in Recent History

Walking into the Jaeger Center and straight down the entryway, one will come across the College trophy case, proudly displaying Division III (DIII) championship trophies from over the years. Along with a handful of individual national titles, Gettysburg teams have captured four national championships: field hockey in 1980, and women’s lacrosse in 2011, 2017, and 2018. For such a small school, the College has achieved immense success on the national stage.

Women’s lacrosse stands out from the rest. They have won three NCAA DIII championships in the last 11 years. They were semifinalists just last season in 2022, and they made 18 consecutive appearances in the national tournament from 2002 to 2019. On the conference level, they were crowned Centennial Conference (CC) champions six times between 2013 and 2022. They hope to continue this success this upcoming spring under new head coach Charlotte Cunningham.

But is women’s lacrosse definitively the best team at the College in recent history? By accolades, yes, but I did a breakdown of each team’s winning percentage over the past ten seasons to determine who is the most consistent winner.

Winning percentage is not the perfect statistic to measure success by. Different teams play a different number of games per season, giving them each an unequal chance to statistically impact their overall winning percentage. At the extremes, baseball and softball average in the mid-30s for number of games played, while football and men’s and women’s swimming only compete ten times a season. Only regular season wins, losses, and ties were included in the comparison.

Using winning percentage also alienates women’s and men’s golf, track and field, and cross country from being a part of the comparison. These sports do not record traditional win-loss-tie records. Instead, they place in each match among a number of opponents.

That does not mean these sports are unworthy of being mentioned. Examples of recent success include men’s golf securing the CC championship in 2019 and placing 24th out of 42 teams in the first round of the national tournament. Women’s track & field has seen two All-Americans in recent history with Katie Cavanaugh and Holly Ferrara earning the recognition in 2016 and 2021, respectively.

Figure A shows each men’s team and their winning percentage over the past ten seasons of competition. The results were divided – four teams finished over .500, and four teams finished under. Men’s soccer barely scraped by with a 51.4% winning percentage. In their past two seasons, they earned winning records and even made a DIII tournament appearance in 2019, but the early-to-mid 2010s was a more tumultuous stretch. 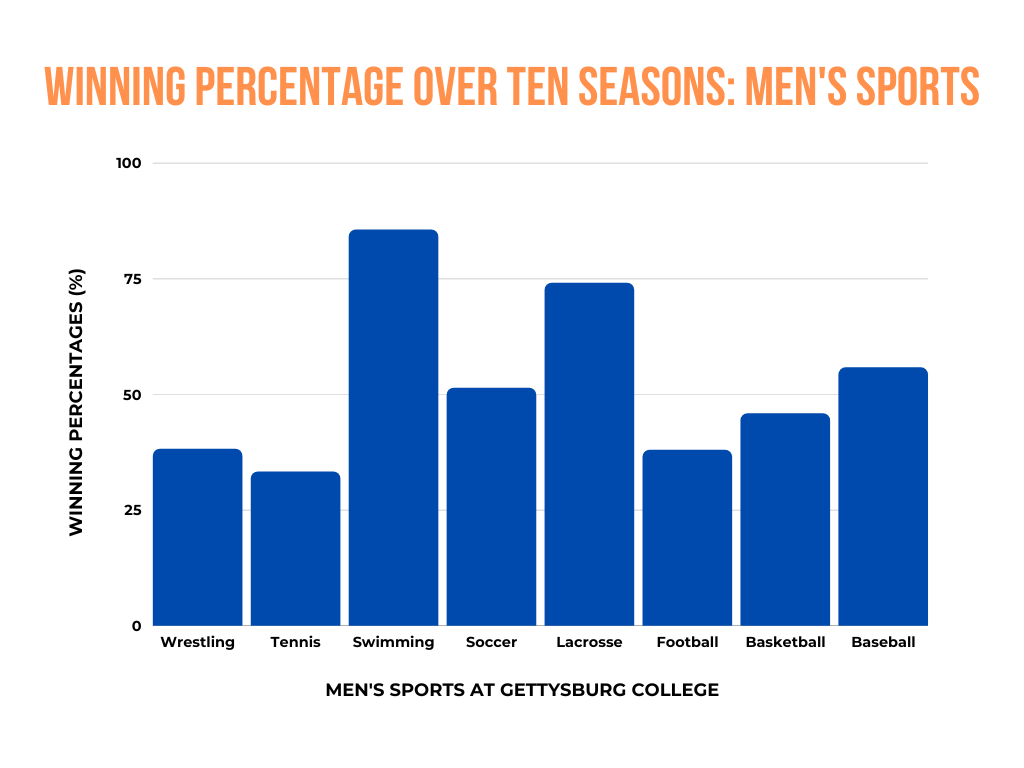 Men’s swimming and men’s lacrosse posted the highest winning percentages at 85.6% and 74.1%, respectively. Swimming has been a juggernaut in the CC, winning six-straight conference championships from 2011-2016 and tacking on another in 2018. They posted four undefeated records in the ten year span and did not record a single record at or below .500. Lacrosse has both the winning percentage and accolades to support their recent success. After a few mediocre years, the team quickly blossomed into a perennial contender in 2015, posting an impressive 20-1 record. They have tallied 35-straight winning seasons from 1985-2022, were DIII tournament semifinalists in 2015, 2016, 2018, and 2022, and won the CC in 2015 and 2016.

Baseball and basketball are both hovering around the .500 mark, with baseball above it at a winning percentage of 55.8% and basketball below at 45.9%. While basketball has been progressing over the past ten seasons, baseball is notably regressing, something new head coach Cory Beddick will try to reverse this upcoming spring.

Overall, the last ten years have been good to some men’s teams and not so good to other teams. The women’s side, however, saw a much more widespread level of success.

Figure B displays the winning percentages for each of the College’s women’s teams in their past ten seasons of competition. Six of the eight teams are above .500, compared to just four of eight on the men’s side. These teams include women’s basketball, lacrosse, soccer, softball, swimming, and volleyball. 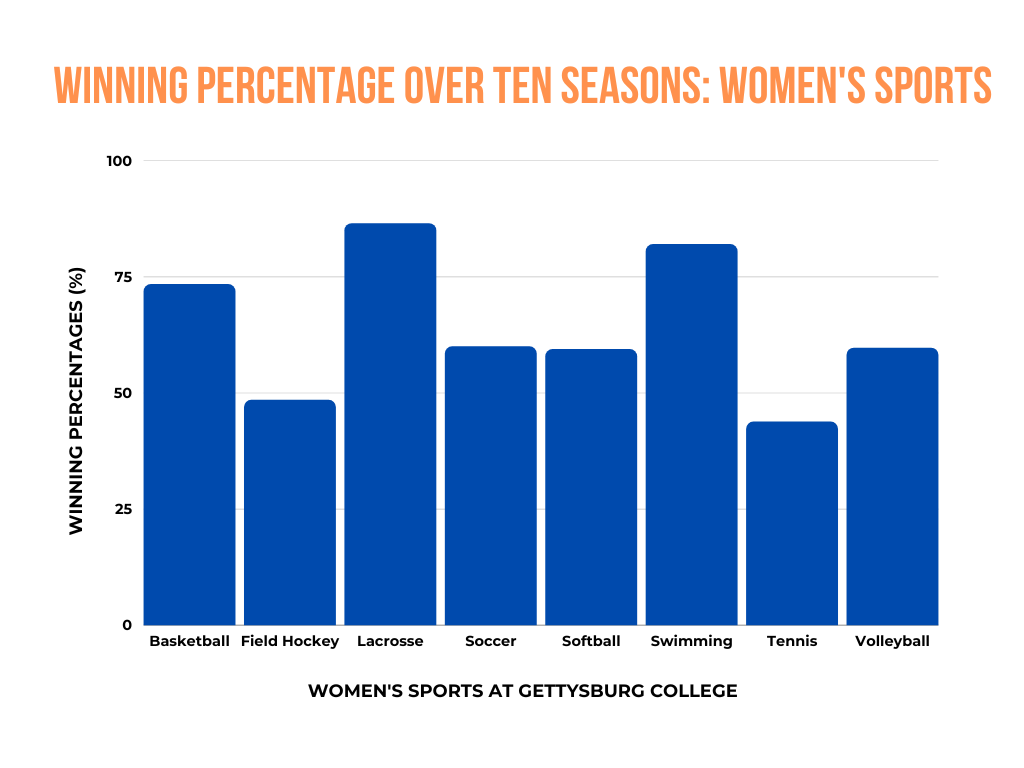 Women’s lacrosse placed first overall in winning percentage between all sixteen teams (men and women) with a mark of 86.5%, beating out men’s swimming by less than a percentage point. They posted two 20-win seasons in 2017 and 2018, both years they went on to win the DIII tournament. They have not slowed down either, going 19-4 last spring.

Women’s soccer, volleyball, and softball all finished right next to each other at 60%, 59.7%, and 59.4%, respectively. Soccer took a dip near the .500 mark between 2016 and 2018, but they have since rebounded, going 11-4-1 in their last full season. The volleyball team’s rate of success has fluctuated over the last ten seasons, but they only recorded one losing record during this period. Tough conference opponents like Johns Hopkins have kept them from claiming any CC titles. The softball team was a powerhouse early on in the decade, and though their win totals in the past two seasons have not reached the same heights they did from 2015 to 2018, they took home the CC crown in 2021 and earned a spot in the DIII tournament.

The two teams below the .500 mark are field hockey and women’s tennis. Field hockey just missed the cut with a winning percentage of 48.5%. They have gone back and forth between winning and losing records and posted an even 8-8 finish in 2021. The team has work to do if they want to add a second NCAA title to their name. Women’s tennis has had a rough go of the past ten seasons, only finishing above .500 once in 2019. They finished last with a winning percentage of 43.8%.

Gettysburg student-athletes and the entire college community have much to be proud of when it comes to the success of their sports teams. We look forward to seeing what the next ten seasons bring.

All statistics courtesy of Gettysburg College Athletics at www.gettysburgsports.com

This article originally appeared on pages 18–19 of the October 2022 edition of The Gettysburgian’s magazine.