Home » News » Student Senate 4/25: Awards and Inductions for Final Meeting of the Semester

Student Senate 4/25: Awards and Inductions for Final Meeting of the Semester 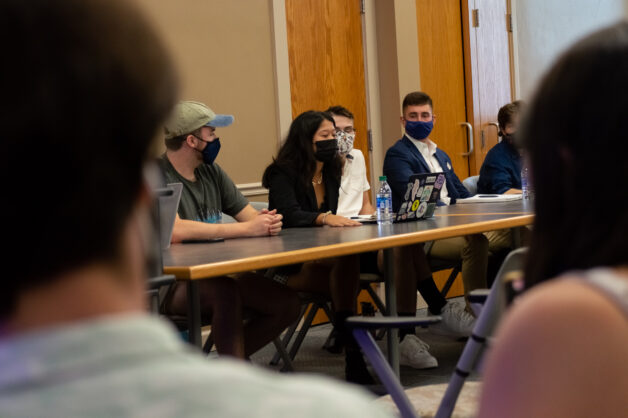 The last Student Senate meeting of the semester included an induction ceremony for newly elected senators, presentation of awards, and thank you messages from the executive board.

President Syd Quan ’22 began by thanking Senate for the work over the past year.

“I am at a loss of words because I’ve been dedicated to this for the past four years,” Quan said.

She presented cords to the seniors who have served on the executive board of Senate for at least a year: Senator Lauren Browning ’22, Senior Class President Courtney Cholewa ’22, Shane Carley ’22, Inclusion Officer Alex Economou ’22, Giacomo Coppola ’22 and Senator Daniel Jones ’22.

Vice President Miranda Zamora ’23 gave an officer report and expressed her excitement for the coming academic year as president.

“I’m excited to work with you all next year, and thank you for what you all have done this year.”

Alex Economou ’22 continued the officer reports with a thank-you to Senate for their work over the past four years.

Allen provided an update about Springfest weekend and thanked Senate for a great year.

“This is the most student organization involvement in Springfest weekend we’ve ever seen,” he said, noting that over 70 events took place throughout the weekend. “Based on the feedback, everyone liked this model.”

Allen will be on paternity leave until late October of the 2023 academic year. Associate VP for College Life Jeff Foster will serve as Senate’s advisor in the interim.

“Thank you for a great year. I know it was difficult, but you did great work,” Allen said.

Budget request from Biosphere: requested $150 for Careers Not in Research Talk for former STEM majors to discuss their careers in professions outside of research. The Budget Management Committee recommended the full amount.

They also requested $185 for a Rita’s Ice Cream Social the week of final exams. BMC recommended $115—a $70 deduction from their previous request since their graduation cords were covered by the base budget.

Disciplemakers Christian Fellowship requested $4,000 for registration fees for a week-long conference. The amount passed in full.

New American Renaissance requested $940 for camera equipment and an Adobe Creative Cloud subscription for students to build their own brands. The amount passed in full.

The Safety Committee shared that they will be meeting with DPS about starting self defense classes next year.

Over the summer, Ethan Wilt ’24 will be going to town council meetings to discuss crosswalk accessibility and speed bumps on campus.

The Committee is also working with Executive Director of DPS Alex Wiltz to discuss potentially changing the key system.

There were no club reports and announcements or student concerns.

Senate officially inducted their newly elected Senators and officers for the 2022–23 academic year. The inductees are as follows:

After the induction, this semester’s final Senate meeting was adjourned.