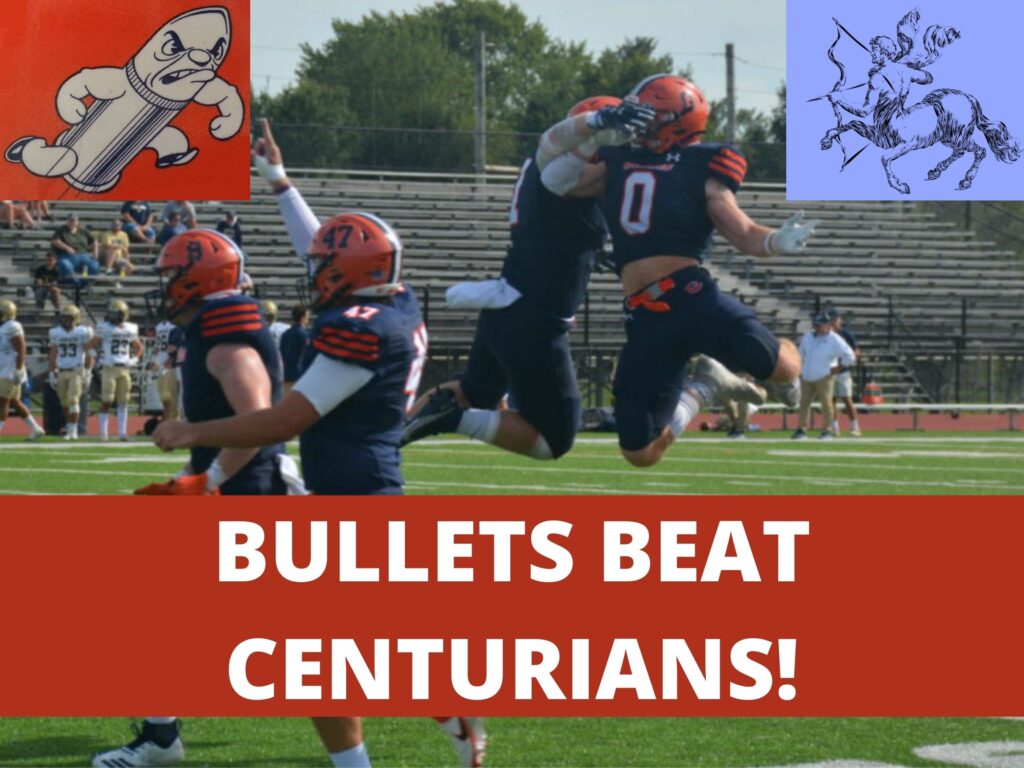 Football and winning – words you do not often hear together on the campus of Gettysburg College. Yet, it actually happened this past weekend. The Bullets took down their conference rival Bishop Sycamore Centurions by a score of 2-0.

The opening quarter was extremely exciting, with neither team gaining any positive yardage through the first 15 minutes. Gettysburg started out with the football, putting it on the ground for three straight rushes that went for 20 yards, -40 yards, and 20 yards, respectively, bringing them back to the line of scrimmage and forcing them to punt. Bishop Sycamore started their first drive with good field position, but they were intercepted on the first play.

Gettysburg could not capitalize on its interception, throwing four straight incomplete passes and turning it over on downs to end the quarter. Bishop Sycamore, starting on Gettysburg’s twenty yard-line, made their way through the red zone and to the one. Electing to go four it on fourth down, the team was sacked for a loss of 20 yards, giving Gettysburg the momentum.

The Bullets ensuing drive started off with a 60-yard bomb launched into the endzone. The ball fell into the arms of the sprinting receiver, who continued to bobble it until he, unfortunately, ran out the back of the endzone. The score was 0-0 at the end of the half.

As the two teams returned to the turf for the start of the third, the crowd was electric, the first 30 minutes of high-quality play getting them excited for the rest of the match. Bishop Sycamore had the privilege of starting with the football and took advantage, returning the opening kickoff all the way back to the red zone. After a couple of rushes, they were at the one yard-line once again, poised to score, and their coach called timeout to draw up a play.

The Centurions attempted the world-renowned “Philly Special” and failed miserably. There was a bad snap that just kept on bouncing, out of the red zone and back towards midfield. It ended up at the opposite one-yard-line in the grasp of a Gettysburg defender, giving them a great chance to score. Unfortunately for the Bullets, they were forced to attempt a field goal, which sailed under the crossbar.

Heading into the fourth, the score was tied 0-0, both teams in a defensive battle. After numerous changes, the Bullets finally put some points on the board. After the missed field goal, Bishop Sycamore’s returner accidentally stepped out of the boundaries of the endzone before kneeling, placing his offense at their own one yard-line.

The Bullets brought the blitz and tackled the Centurions’ running back in the endzone for a safety, putting them up 2-0, which was all they needed for the win. They were able to drain the remaining minutes from the clock and hold on to the shutout victory over their rival.

An anonymous Gettysburg player remarked that “This is the greatest win I’ve ever been a part of. While we were aiming for at least a touchdown, the safety got the job done. I am so proud of this team for fighting hard all 60 minutes of this game.” Bishop Sycamore could not be reached for an interview.

The Bullets return to action next week against the Alabama Crimson Tide, a team who they normally would be heavily favored to lose against if it was not for this stellar win against Bishop Sycamore. Make sure you come out to Musselman Stadium at 7 p.m. for next week’s showdown (as the field does not have stadium lights, flashlights will be given to all spectators upon entry)!