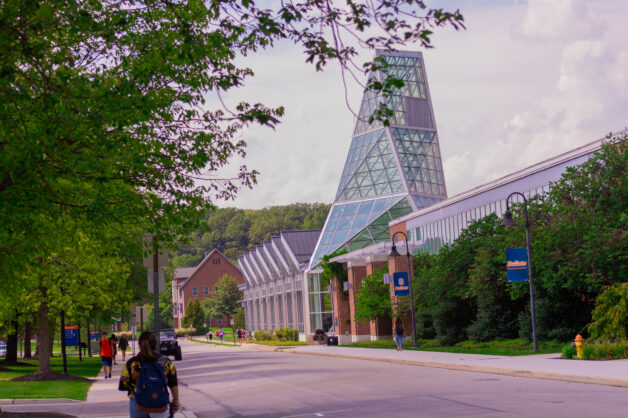 “Our spending has varied wildly,” said Executive Director of Athletics and Campus Recreation Mike Mattia when asked about the state of Gettysburg College’s Athletics budget. With 25% of the current student body being student-athletes, sports represents a major aspect of Gettysburg, so understanding the Athletics budget is crucial to an appreciation of the College’s overall finances.

As with all areas of Gettysburg’s finances, the COVID-19 pandemic has likely permanently impacted the Athletics budget. The inconsistency the pandemic introduced to our lives since the spring of 2020 is still being felt, especially when it comes to Athletics. While the onset of the pandemic completely shut down all sports, COVID and the restrictions that arose to combat it have had lingering effects: teams could only play a limited number of games last year, team training trips have been canceled and postponements and cancellations of games this year have all contributed to making pinning down a consistent Athletics budget “difficult,” according to Mattia.

But where does the money for Gettysburg Athletics come from? According to Mattia, the College itself shoulders almost all of the financial burden, contributing roughly 95% of the total budget. Outside of the College funds, the Athletics department uses the Orange and Blue Club (O&B), Athletics-specific endowments, and a handful of sponsors who provide the extra funding needed to round out the budget.

If you have been to a game on the Gettysburg College campus or have watched a livestream hosted by our Athletic communications team, you have likely heard an advertisement for the Orange and Blue Club asking for donations. O&B acts as the fundraising arm of the Athletics department and is connected to College Advancement. Each team fundraises through O&B, which Mattia said is used to “help enhance the overall experience for student-athletes,” going beyond “covering the costs of basics such as uniforms, equipment, travel, officials fees and recruiting, which the general fund covers.” O&B also hosts an annual “golf classic” fundraising program to further support the Athletics budget.

Since 95% of the Athletics budget comes directly from the College, whose overall finances have been at the mercy of COV- ID, it is easy to link this to the tumultuous state of the Athletics budget. Executive Director Mattia did not provide specific numbers for how each of the 24 varsity teams on campus are funded, saying that “with all of the discord of the last few years, providing numbers would show an incomplete look at the actual costs to run the athletic department.”

This “discord” has made it hard to track the Athletics budget; according to Mattia, there are no real trends to point out, and overall spending has fluctuated from team to team depending on whether a team’s season was fully canceled or partially limited due to the pandemic. Any money that was given to Athletics and then funneled to a specific team would also have to have been sent back to the College administration if a team’s season was cut short, meaning those funds could be lost for good going forward.

However, it is safe to say that teams such as football, lacrosse and baseball require the most funding given the size of their rosters and coaching staffs (football, for example, had 101 rostered players and eight coaching staffers in the 2021 season, compared to women’s golf who has seven players and two coaches), the facilities and fields they practice and compete on and the equipment and training they require. Looking at the football example, though, a team who went 1-9 this year and has not had a winning season since 2015, calls into question whether a team’s level of success should be a factor in determining how much funding they receive.

According to Mattia, the Athletics department has also been affected by the College’s hiring freeze and currently has five unfilled positions. These positions include a few assistant coaches, an athletic trainer and athletic communications administrator, all crucial to the proper functioning of teams and the department as a whole.

COVID has certainly put the future of the College’s Athletics budget in question. Executive Director Mattia referenced the anticipated decrease in the overall student body in the coming years, highlighting how that will make student-athletes constitute an even greater proportion of the students on campus.

“I obviously want to be a good steward of the College’s resources and properly manage the budget for the Athletics department,” Mattia said. “However, we want to continue the great tradition of Gettysburg Athletics.” This means continuing to allow coaches to be able to attract the best possible prospective student-athletes, provide a great experience for current student-athletes and put nationally competitive teams out on the field, court, track and pool.

While certain teams like football, baseball, tennis and cross-country have faced struggles in recent years, Gettysburg has a substantial lineup of successful teams. Both the men’s and women’s basketball teams are positioned to enter the Centennial Conference playoffs this season. As of February 2022, the women have a 22-3 overall record and a 19-1 conference record that has them ranked at the top of the standings and they are positioned to do well in the playoffs. Meanwhile, the men’s basketball team are currently 11-7 in the Centennial, third in the standings, and poised to make a similar playoff run.

Women’s lacrosse is entering their season ranked ninth in a national Division III poll and have won the national championships in 2011 and 2017. men’s lacrosse is set for similar success this spring after securing a rank of 17 in a national coaches’ preseason poll. Softball has earned their first national ranking in their history this preseason, ranked 24th in the country. men’s swimming, who will compete in the Centennial Conference championships, has won consecutive conference crowns from 2011–2018. Finally, women’s golf has had arguably the most success of any Gettysburg varsity team, claiming 10 Centennial Conference titles from 2008–2019.

Several Bullets teams have found success on the local, conference and national levels, and properly maintaining the Athletics budget has been crucial to those accomplishments. The recent concerns with the budget could put future success in jeopardy, but Executive Director Mattia and his staff are up to the challenge.

“With the understanding that our future budgets will be negatively impacted,” Mattia said, “we will need to put a greater focus on increasing our Orange & Blue Club donations, and finding additional forms of revenue through increased sponsorships and other sources.” While this strategy will put more weight on the fundraising skills of the department, the future of Gettysburg Athletics depends on it.

This article originally appeared on pages 16–17 of the February 22, 2022 edition of The Gettysburgian’s magazine.