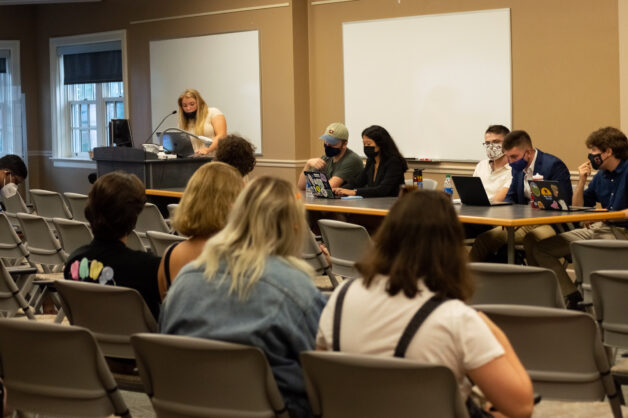 Monday night’s meeting included updates on the COVID-19 situation on campus, budget requests, and the initiation of an impeachment investigation for Vice President Colin Hughes ’23.

Complaints about an opinion article in The Gettysburgian by Hughes were addressed by Quan. She wished to establish that the Senate contains a student body who all cares about the institution of the College, and “when it gets polarizing, nothing gets done.” She also wished to stress that “at the end of the day, it is my and the Executive Board’s job to be a non-partisan body and create effective change for the institution.”

Connor Heath ’23 announced that so far, there has been $32,459.26 spent, but more requests from organizations increased the amount to roughly $43,000:

Director of Student Activities and Greek Life Jon Allen reminded students to take the Campus Climate Sexual Assault Survey, stating that “if you haven’t taken it already, please do.” He mentioned that the data is essential to make progress in the campus community.

Allen also announced that the last day for student organizations to host an event is Dec. 10. There cannot be any events during finals week, so the last two weeks after Thanksgiving are the latest time to schedule.

Heath reminded students that any budget requests above $800 for this semester need to be submitted this week or the week after Thanksgiving break.

The College Life Advisory Committee (CLAC) informed members that a survey regarding a potential bike and/or scooter rental program has been sent out. They will be talking about the logistics of the concept in their upcoming meetings, and will be coordinating with a senior doing a capstone project on the subject to ensure their information is accurate.

The printers should be in the library by this week due to what was referred to as a “supply chain bottleneck” delaying them from being shipped into the library. Students were thanked once again for their patience and understanding.

The Inclusion Committee announced that the speaker for the Dec. 6 Senate meeting is Ivana Lopez Espinosa, a Gettysburg alum. The Committee will also be talking Wednesday at 6 p.m. about the goals of the Senate for the future

The Outreach Committee has started a series on their Instagram page to introduce all of the committees, and told Committee members to get pictures taken to be advertised if not already done. The Committee is also going to start several new series, which will be discussed in their meetings in CUB 208 at 1 p.m. on Mondays.

The Policy Committee reminded students of their meetings on Fridays in CUB 212 at 3 p.m.

The Safety Committee debriefed their conversation with Dean of Students Anne Ehrlich regarding the COVID-19 situation on campus, stressing that they intended to make sure that the student body was being informed of crucial updates. They also discussed the statistics that dictate the decisions regarding the status of the campus. Dean Ehrlich clarified that the email about the return to universal masking was the last update, and the administration will consider testing if the number of cases continues to rise. It is also likely that the campus will retain a universal masking policy until the end of the semester for the foreseeable future. Dean Ehrlich is open to speaking with the Senate about the concerns regarding the policies for next semester, and “was open to a diversity of opinions” in the meeting as well.

The Sustainability Committee announced that their meetings have been moved to Wednesdays in CUB 212 at 4 p.m.

This Wednesday at 5 p.m., Young Americans for Freedom will be hosting a talk in McCreary 15 about identity and the Free Britney situation.

Students were given a general reminder of Thanksgiving Dinner at Servo, which will run from 4:30 to 7 p.m.

Matt James ’22 reminded students of a talk being given by a speaker on behalf of the Students for Indigenous Awareness on Wednesday at 5 p.m. This is a Senate-funded event in Mara Auditorium.

Quan opened a discussion regarding student stress, asking what overwhelms the general student body “to pinpoint things that are stressful for students.” The list of concerns included the following: many exams at once, a lack of consideration for students’ schedules and workload, the expectations of students to quickly adjust to pre-pandemic times, the breaks that are immediately followed by assessments, a lack of timely updating of class materials on Moodle, and a lack of uniformity of the platforms on which assignments are located.

Quan stated that she was thinking about having the Faculty Council (the executive board of the faculty, as defined by Allen) come in to discuss these concerns, possibly at the start of the spring 2022 semester, so the faculty can keep these issues in mind, especially because there are not as many breaks in the spring. Quan also asked the attendees if they would prefer more brief wellness events rather than entire days, as the administration is not willing to give out a wellness day but may be willing to provide alternate opportunities to students to relax and de-stress. She emphasized that she is actively trying to open this conversation.

Allen clarified that a certain amount of educational days are required for the College to maintain accreditation, but advised students to check with Vice Provost Jack Ryan about this to confirm what the requirements are. Matt James ’22 suggested that professors could possibly add “rest days” into their syllabi to at least provide an opportunity for students to pursue their wellness without disrupting this pre-set requirement.

Allen inquired as to whether calming activities once a week would be preferable, and students generally were receptive to the idea, although they were concerned about being able to fit the activities into their schedule. Alternative suggestions to the events included re-introducing a “to-go” option to provide kits for students who cannot make the scheduled wellness events.

Han Gong ’22 voiced a concern about people leaving scooters inside buildings and riding them inside buildings, which is an issue that Quan stated could be taken up with Dean Ehrlich.

It was confirmed that the library is not going to change their hours for the semester due to DPS not being available.

A rumor was addressed about the College “keeping people home” after Thanksgiving due to COVID-19, which was a significant concern for a lot of people. Quan agreed that an official statement needs to be made confirming that this is not the goal and stated that she would ask Dean Ehrlich to confirm this.

An expression of frustration about the College’s lack of communication with school was also addressed, but Quan pointed out that “no response is also a response.” Suggestions to bring back the COVID-19 Dashboard to easily update the community were largely supported.

Alex Bove ’24 made a motion to impeach Vice President Hughes on the basis of conduct unbecoming, violation of values, and failure to discharge duties responsibly. Parliamentarian Alexis Jones ’24 initiated the process of obtaining allegations from Bove for the potential investigation process.

There was a motion to discuss the appropriate category for each of Bove’s allegations, which was seconded. Jones clarified that the investigation would need to fit all three of these categories before proceeding. The categorization is as listed below:

The group then moved into a vote via a secret ballot. The intent of this vote was to determine if  there should be an investigation put forth regarding the categorized allegations—not whether impeachment should happen. The vote resulted in 2 abstentions, 3 negatives, and 23 affirmatives, meaning that the Senate will move forward into the investigation. Members were instructed to reach out to Jones to see if they are eligible to serve as pertinent witnesses in the trial. Upon questioning, Colin Hughes also clarified that he has no intention to resign from the Senate.

Jones introduced a discussion regarding the Senate’s resignation policy. The Senate’s Constitution currently states that the Senate President, with approval of the executive board, can fill empty spots, but there is no language regarding the timeline of officers resigning from their official duties, and as Jones stated, “absence without proper warning burdens those who need to fill the position.” Jones asked for opinions from students on the matter to start a conversation about how to improve the current standards that are set.

Current ideas included: requiring officers to give at least a week to two weeks’ notice of resignation, produce a written statement to the president giving advance notice, and carry out the designated position’s actions despite their vacancy until the spot can be filled.

Quan stated that in the past, a mere text or email has been the way in which she has been notified of resignation, and there has never been a formal policy established. She stated that she wanted to make sure “no one is leaving all of a sudden” from the Senate, as it is an inconvenience for the executive board and the president when members leave so quickly. Quan added that talking about newer things that the Policy Committee is trying to refine gives them “tangible things to work with.” Many members expressed active interest in the matter.