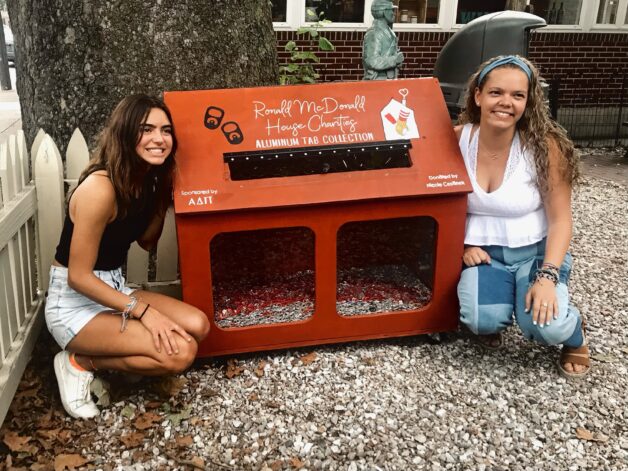 Lauren Cosgrave ’23 (left) and Nicole Cesanek ’24 (right) next to the tab collection at Mr. G’s (Photo courtesy of Nicole Cesanek)

For Nicole Cesanek ’24, finding ways to change the world for the better is nothing new.

In elementary school, Cesanek’s school administration started a school-wide aluminum pop tab collection competition between homerooms to support the Ronald McDonald House Charities (RMHC) of Philadelphia, including Family Rooms, Care Mobiles, and the Ronald McDonald House, which serve families who have children receiving medical care. The houses provide families comfortable living spaces, meals, playtime opportunities for children, accredited educational programs, and other support services. The RMHC accept aluminum tabs from items ranging from soup and soda cans to dog food cans and takes them to local recycling centers, where they receive compensation from the pound to fund the services provided at the homes.

While Cesanek’s homeroom did not win the competition, she and her family began to collect aluminum tabs for the competition they assumed would take place the following year. Years passed, however, and the tab collection never returned. By the time Cesanek reached her junior year, her garage was filled with tabs, which prompted her to take action.

“I figured we weren’t the only family that collected them and didn’t know where to take them, so I wanted to be sure that people had an easily accessible location to take the tabs if they were collecting, but also to catch people’s attention who weren’t collecting to encourage them to start,” said Cesanek.

Cesanek began by dispersing flyers throughout her neighborhood to spread awareness and neighbors dropped their tabs off at her front door. The collection expanded to her community, as well as churches and other organizations in her hometown, and ultimately, Cesanek helped to bring back the school-wide collection.
Partnering with the National Honor Society at her high school, Cesanek created a committee of five members to spearhead the tab collection fundraiser, naming the organization Tabs for Change. The fundraiser was set to run for two months, with a school goal of collecting 100 pounds of tabs. The school ultimately exceeded its goal, raising 136 pounds of tabs for the RMHC.

Upon graduating high school, Cesanek knew she wanted to continue her efforts to collect tabs for the RMHC while at Gettysburg College, and found a way to do so through her First-Year Seminar, Public Policy, Change, and Agency.

“We were assigned to create a paper outlining something we wanted to change about Gettysburg or our hometown. I decided to write a paper outlining plans for a large tab collection bin that could be placed in the center of town for both the people of Gettysburg College and the surrounding community to be a part of,” said Cesanek.

The summer after her first year of college, Cesanek and her dad built the tab collection bin. Cesanek decided to place it at Mr. G’s Ice Cream Shop, a popular ice cream spot in Gettysburg, frequented by students, community members, and tourists. She worked with the Alpha Delta Pi (ADPi) sorority chapter at Gettysburg College, which partners with RMHC, to accomplish this goal.

“Nicole informed me about her idea this summer and asked if I would be willing to help as an ADPi representative. I accepted the offer because I felt it was an amazing idea and a great way to involve the community,” said Lauren Cosgrave ’23.
Another important aspect of Cesanek’s relationship with ADPi was finding a way to carry on the legacy of her project after she graduates.

“The reason I went to [ADPi] was that I wanted this project to be long-lasting and I felt that if I were the only one taking care of it, then there would be no one to take care of it after I’m gone. I developed a plan for [ADPi’s] involvement in the future for taking care of the collection,” said Cesanek.

Cosgrave explained that after Cesanek graduates, ADPi will pass down her responsibilities to another sister. They will regularly check the box at Mr. G’s and ensure that it continues to properly function. ADPi will also deliver the tabs to RMHC and store the box in a safe location during winter break. Cosgrave sees Cesanek’s project as an embodiment of the key principles of ADPi, and she commends Cesanek for her work. 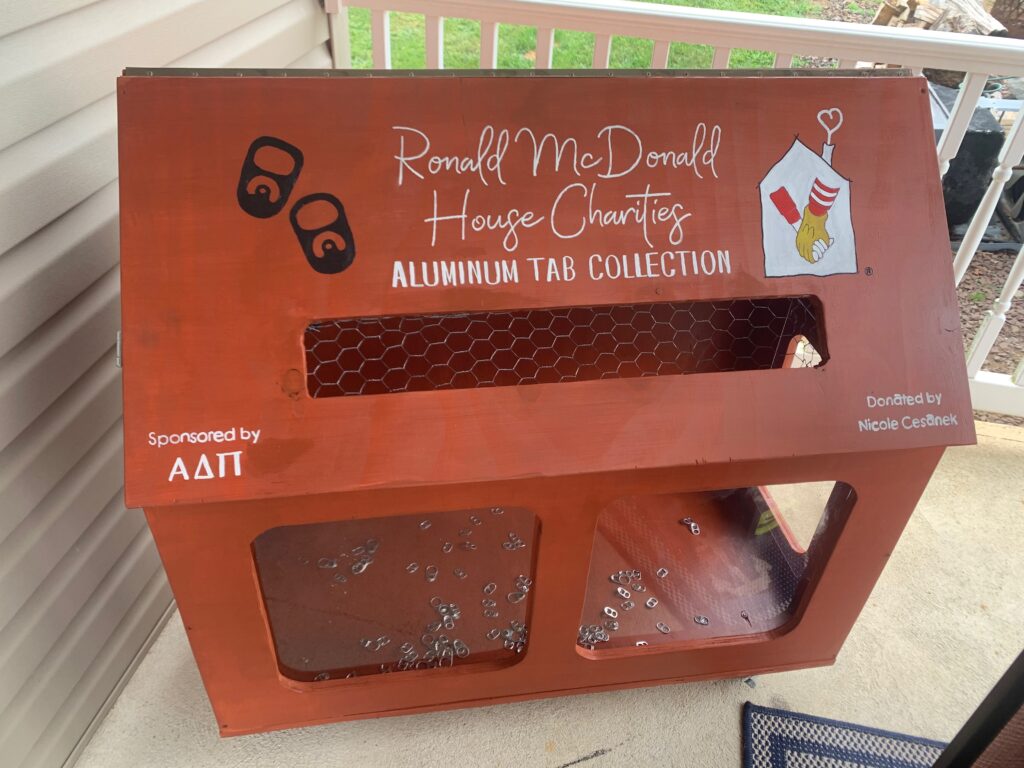 “ADPi’s mission is to create a sisterhood that aligns with high academic standards and strong philanthropic efforts. ADPi’s philanthropy and Nicole’s project both focus on serving those in the RMHC. What started out as a project for a First-Year Seminar has created community-wide involvement,” said Cosgrave.

Cesanek expressed gratitude to ADPi, Mr. G’s owner Mike Gladfelter, her father, and others involved in her project that made it possible for her to present the structure.

Cesanek said, “I hope this structure is successful in bringing the college and the town community together over a mutual cause and fostering long-lasting aluminum tab collections down the road to benefit such an amazing organization.”
Since the structure was placed at Mr. G’s on Aug. 28, Cesanek and ADPi have collected over seventy pounds of tabs, and they hope to continue collecting more tabs in the future.

This article originally appeared on paged 12–13 of the November 1, 2021 edition of The Gettysburgian’s magazine.