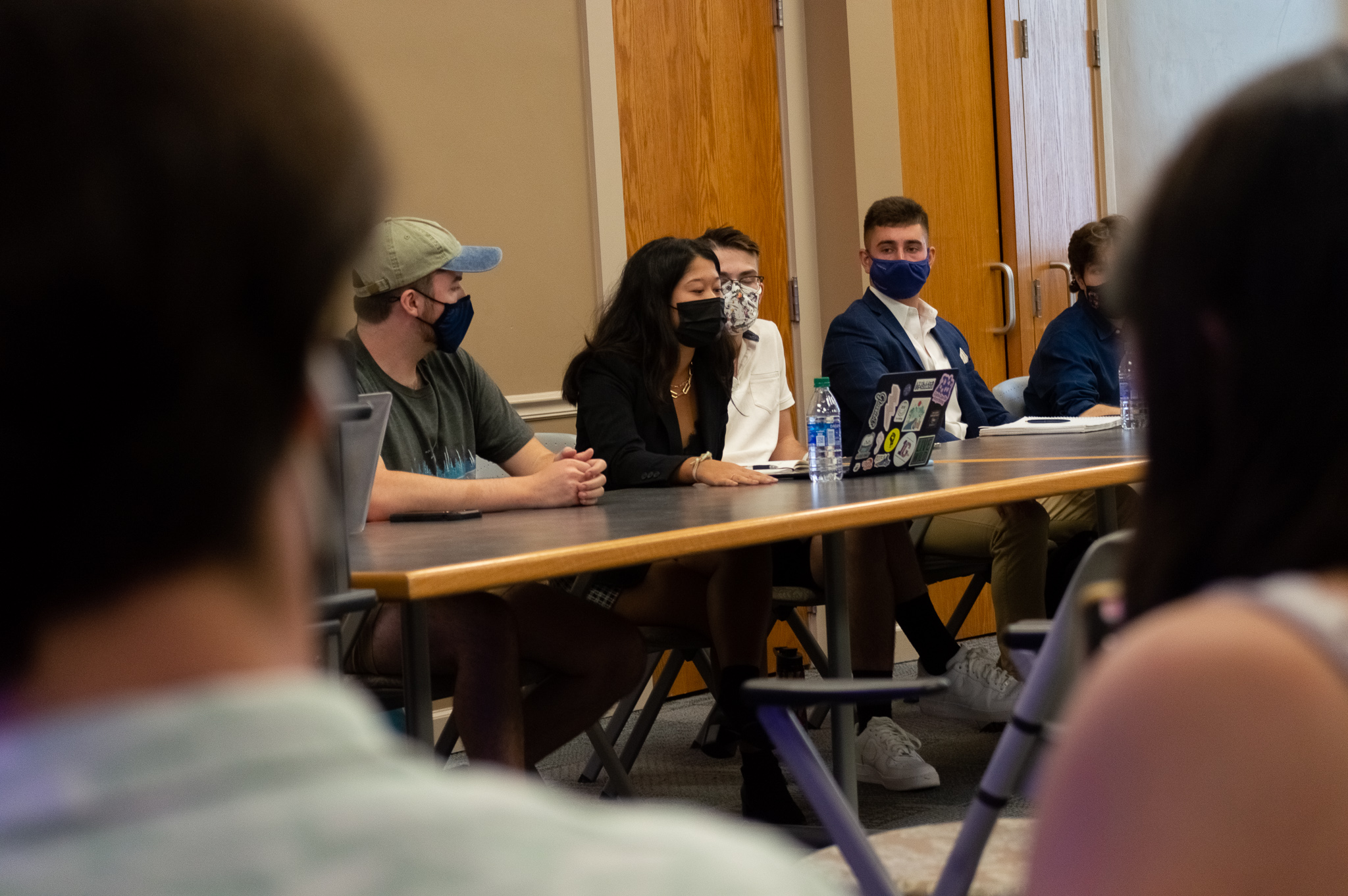 On Monday, Sept. 6, Student Senate had their second meeting of the semester. With no new business to cover, Information Technology Director Rodney Tosten gave a presentation about virtual J-Term offerings, and students voiced concerns regarding the printers and student employment.

President Syd Quan ’22 reiterated that under the new agenda, club representative attendance will be required for the first part of the meeting. She will dismiss representatives after student concerns, before old and new business for voting members.

Senate is accepting nominations for the Ralph Cavaliere Award, presented each year by Senate to a professor that deserves a high honor. Any student may nominate a professor.

The remainder of the executive board had a few announcements. Treasurer Connor Heath ’23 reminded the group that the Budget Management Committee does not officially start running until the first-year and at-large senators are confirmed. Clubs that make budget requests will have to wait until Senate reaches a quorum with these individuals.

Secretary Evelyn Datte ’24 reminded clubs to re-register on engageGettysburg. Parliamentarian Jack Comegno ’24 said he plans to send an email about meeting times for the Senate Policy Committee. Inclusion Officer Alexandros Economou-Garcia ’22 will be sending an email about the Inclusion Committee after first-year senators are confirmed.

Tosten gave a presentation on virtual J-Term—or January Term. He outlined the offerings in the past and asked for recommendations on this year’s programs.

The three main categories of J-Term courses are early college career, mid-college career, and late college career. The subjects of each correspond with skills such as time management, personal well being, presentation skills, networking and community engagement, and financial wellbeing.

J-Term will occur in January of 2022, and is free of charge for Gettysburg students. This is the second consecutive year of operation due to the COVID-19 pandemic. Prior to this year, J-Term was last offered in January of 1985. In 2021, J-term had 250 student participants and 21 sessions.

After Tosten took recommendations from the group, Quan continued the meeting by reminding that committee chairs will be announced next week, and an email is forthcoming from Vice President Colin Hughes ’23 regarding affinity group leaders.

Quan then opened the floor for student concerns; the first of which regarded printing. Students mentioned various problems since printers were removed from the library, an action made last summer to limit high-touch surfaces in the library. Now, the printers are in the basement of Plank and other locations, and students have struggled with paper jams and backups when attempting to print.

“I don’t understand why we can’t put them back in the library because I know that my first year that seemed to work out and there were front desk people who were able to fill the paper and fix the paper jams,” Miranda Zamora ’23 said.

Tess Rodgers ’22 started a petition last Monday to bring the printers back into the library. The petition now has over 350 signatures, which gives Student Senate the grounds to oversee the process of bringing the concern to college administration.

The next student concern was about student employment, specifically regarding compensation.

One student explained that he works in the scene shop with the theatre department, which requires 40 hours of unpaid labor prior to becoming an employee.

“New workers are not enrolled in the workers comp program, which obviously protects the college more than the students, until they reach full employee status after about 40 hours of unpaid labor,” he said.

This student also mentioned noticing that his time sheet was edited without his consent.

Rock Swartz ’22 noted that students have worked overtime without compensation in admissions in the past.

Thomas Cassara ’23 mentioned that a student employee in Bullet was not informed when one of their coworkers tested positive for COVID-19 last semester.

Another concern came up regarding the rate of student pay. “We deserve to be paid more,” E.j. Gill ’23 said. “This college claims to be this liberal arts institution, leading the way, but we’re still paying student employees $7.25 an hour.”

The conversation ended with a discussion of the cost of charging electric vehicles on campus.

“I was alerted that there are electric car chargers on campus, except you have to pay five dollars an hour. “[My friend] was wondering if the price could be reduced or cut to zero,” Heath said.