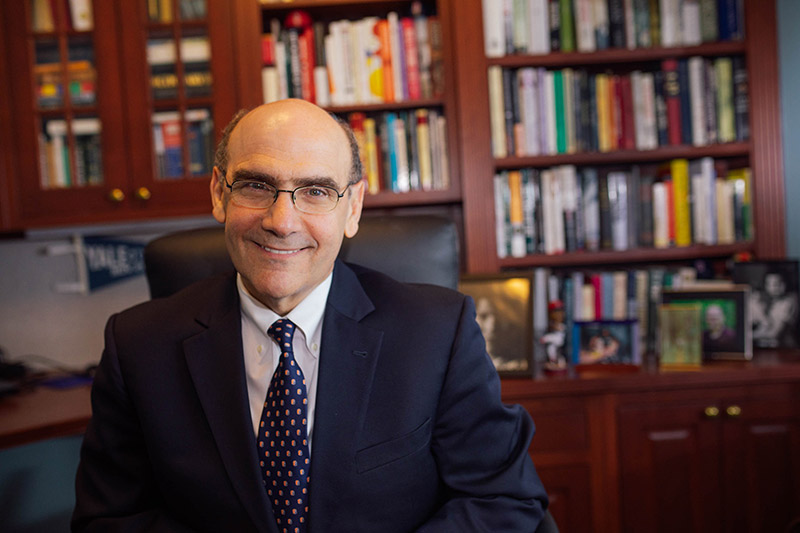 President Bob Iuliano’s first year at Gettysburg College went so perfectly planning-wise that he knew it would be hard to beat.

“I wouldn’t change anything about year one,” he said while planting tulips in front of Penn Hall. “But year two has just been relaxing, plain and simple. Now that I’m more familiar with this amazing campus community, I’ve really been able to focus on more of my long-term goals and less on crises.”

Everything about this academic year—including the return to in-person instruction in the fall, a COVID-19 outbreak on campus, de-densification, a student protest in response to de-densification, tuition refunds, Greek Life chapter suspensions, and the growing deficit—has been “a breeze” to manage, according to Iuliano.

“I have never had more time to reflect,” he said. Students see him journaling while sitting in the Stine Lake Adirondack chairs almost every day, and he has taken up a daily walk to Pizza House for a pineapple slice during his lunch hour. Iuliano has even begun taking evening runs, in addition to his usual morning runs, because of openings in his schedule.

“They said it would be a walk in the park, but honestly, I have time for two walks in the park … two runs, even,” he said.

Ensuring the safety of the campus community amid the pandemic has been “a piece of cake” across the board, Iuliano said. He added that the move to de-densification was an easy decision to make.

“Frankly, it’s easier without the students here. Disciplinary issues are someone else’s problem,” he said. “Plus, we already knew that we could throw together an online college in the matter of days, so when the opportunity presented itself, we thought, ‘Why not try it again?’”

Iuliano expressed excitement for year three of his young presidency.

“It really can’t get better than this, but I can’t wait to see what the world has in store for the Gettysburg community.”