Review: The Trial of the Chicago 7 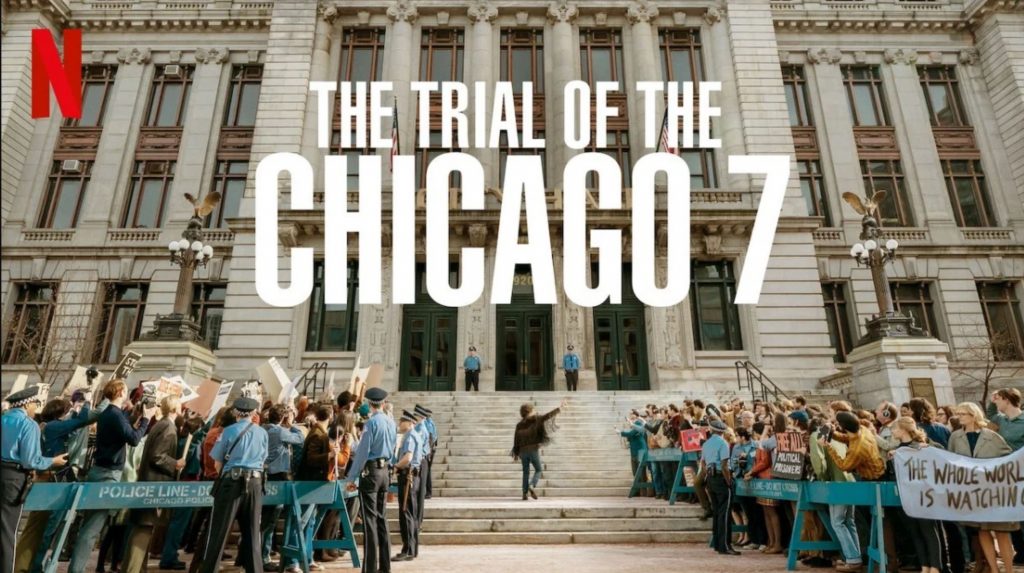 (Promotional photo from The Trial of the Chicago 7)

The Trail of the Chicago 7 tells the story of a group of seven people who are arrested after a protest at the 1968 Democratic Convention in Chicago. The movie mainly follows these seven men as they go through their trial and await sentencing. However, the film also shows everything that happened leading up to the protest and the actual march in downtown Chicago. Aaron Sorkin, the director of the movie, is able to show everything that happened at the trail while flashing back to important aspects of the march when necessary. This is what makes The Trial of the Chicago 7 such a unique film.

The movie is mainly a court drama, which means almost every scene is filled with back and forth dialogue between the prosecution and the defense. Sorkin also expertly crafts a narrative that gives the audience more details about the case at precisely the right times. He achieves this effect by showing viewers various events that occurred before the trial to provide a wholistic view of the characters. This can make the audience feel more sympathetic toward the individuals on trial. Sorkin’s writing can also heavily influence the way an audience member perceives a character.

Aaron Sorkin is known for writing incredible dialogue for his characters and The Trial of the Chicago 7 is no exception. His writing style allows for the viewer of the movie to fully understand what each character is going through and their motivation. The dialogue of the film also allows for great pacing. There is never a dull moment in The Trail of The Chicago 7, even though a majority of the movie takes place in a court room. The reason for this is that Sorkin has the ability to expertly craft conversations between characters. The dialogue always moves the story forward and creates very interesting characters. However, it is the cast of the film that allows the writing to have such a large impact on the viewer.

While The Trial of the Chicago 7 consists of an ensemble cast there are a few standout performances. One example is Eddie Redmayne who plays Tom Hayden. Hayden is the leader of the group and takes the initiative to make sure everyone does not go to jail. He is also the only character in the film that takes the trail seriously. Redmayne gives a charismatic performance by playing the straight man of the movie. A second standout performance is Frank Langella who plays Judge Julius Hoffman. Langella plays a character that is truly a bad person but does not come off as too extreme. He plays the character in such a way that he almost comes off as evil while also making the audience believe that people like this exist in real life.

Overall, The Trial of the Chicago 7 is a film with great characters and dialogue. The movie uses clever editing techniques to give the audience a whole view of the story and provide different perspectives. The actors also do a great job of embodying their characters and making the movie feel realistic. However, one of the most important aspects of The Trial of the Chicago 7 is the fact that it is a very timely film. It deals with issues that still exist in society such as the right to protest and police brutality.