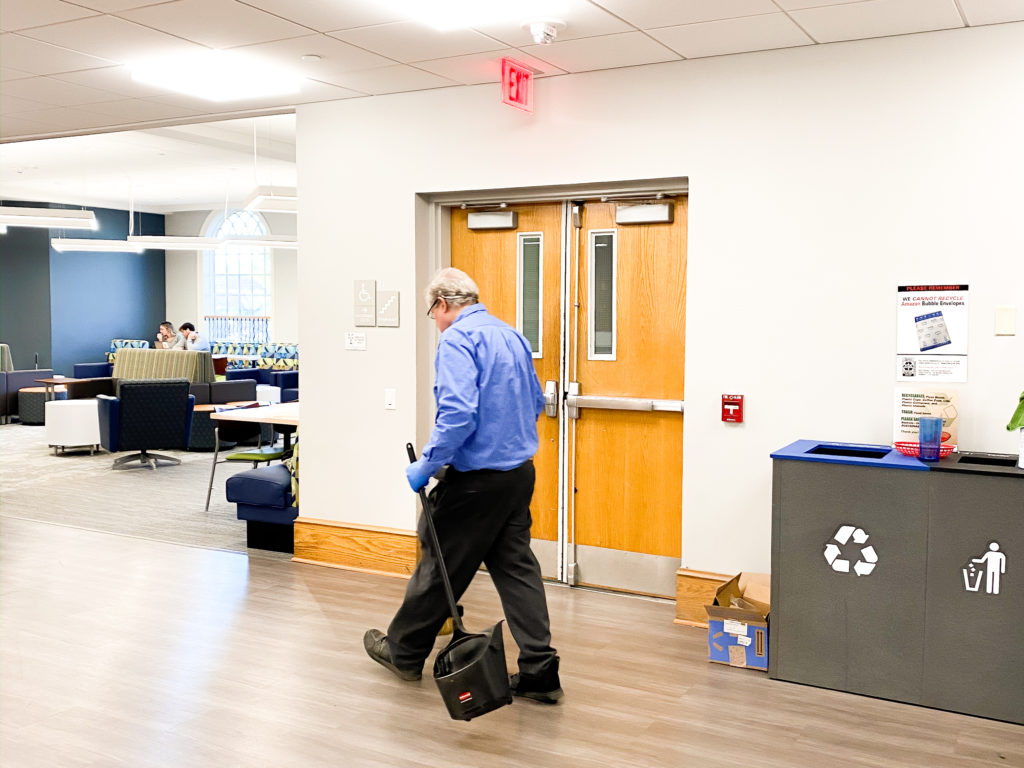 Forty-five percent of Gettysburg College support staff earn less than $15 an hour, a 2017 survey found. That same year, an analysis by Massachusetts Institute of Technology researchers found that the living wage for a family of four with two wage earners and two children in Adams County was $15.53 per hour.

Employees have long viewed the College’s benefits package, which includes tuition benefits for dependents, as at least providing a reasonable trade-off, if not outweighting low wages entirely. But, with those benefits now under the microscope as the college looks to contain costs, concern about employee compensation has grown more acute.

“The fact that he gets paid what he does … and now ours and our children’s health is being compromised to save the college money is appalling.”
-Employee’s Spouse

In Sep. 2019, President Bob Iuliano convened a sub-committee of the Benefits Advisory Committee (BAC) to gather data about employee compensation relative to the local market. Specifically, he charged the sub-committee to:

Four months later, that sub-committee began meeting biweekly to compile wage data, and it is expected to report its findings to Iuliano at the end of the semester.

But just as action that could potentially lead to an adjustment of employee wages has gotten underway, employees encountered another financial obstacle this fall when the college announced a change in health plan options. The college eliminated a popular plan that had a $500 deductible. This year, the college offered two plans, one with a $1,000 deductible and another with a $2,000 deductible plus a health savings account (HSA). In the future, though, only the high-deductible plan will be available.

That change is creating financial strains for college employees. The wife of a support staff member that has worked for the college for 10 years and makes $16/hour said that, in the short term, her family would probably be better off financially if her husband were to seek other employment. (The Gettysburgian granted her anonymity to speak freely about her family’s financial situation without fear of it negatively affecting her husband’s employment status.)

The family of four has experienced a significant increase in out-of-pocket costs for prescriptions and regular check-ups due to the change in insurance plan. Although the college made a $2,500 contribution to the family’s health savings account (a contribution that will decrease to $1,500 next year), the family’s deductible went from $1,000 to $4,000.

The only reason her husband continues to work for the college, she said, is the hope that their two children – both under the age of five – might someday be able to take advantage of the tuition benefits offered to employees’ dependents.

“We do not have confidence in anything changing at this point,” she said. “Since changing the insurance, there has not been discussion regarding salary. The morale is low and if we didn’t have two children under the age of 5 that will be going to college someday, my husband would be looking elsewhere for employment.”

She feels that the college is not reciprocating the commitment her husband made by building his career in Gettysburg.

“It is frustrating just because my husband made the decision to stay somewhere and make a career somewhere thinking long-term for his children to have college tuition paid for. He stayed there and he works hard,” she said. “The fact that he gets paid what he does … and now ours and our children’s health is being compromised to save the college money is appalling.”

This support staff member’s experience is not unique. Support Staff Council Chair and Academic Administrative Assistant in Theatre Arts Carol Coon said that frustration about the healthcare changes is widespread.

“Even though the college is trying to ease the change by providing a contribution to their HSA, these types of changes always have the largest impact on the lowest paid employees,” she said. “With increased out of pocket costs, some will need to decide between paying bills or taking care of a health issue.”

“With increased out of pocket costs, some will need to decide between paying bills or taking care of a health issue.”
-Carol Coon

The issue of employee compensation and benefits in general has caught the attention of faculty members including Professor of Economics and Chair of Public Policy Char Weise, who conducted the 2017 survey of support staff employees, and Professor of English Christopher Fee, who believes this issue has been problematic for some time.

“I have always felt like the hourly staff work very hard, often are extremely supportive of the mission of the college in general, and the students in particular, and it’s a trouble on my mind that they’re not compensated as they should be,” Fee said.

Throughout the semester, the sub-committee is expected to compile the relevant facts. It has not been charged with making corresponding recommendations, though, suggesting that no immediate changes are on the horizon.

This article originally appeared on pages 12-13 of the February 27, 2020 edition of The Gettysburgian’s magazine.