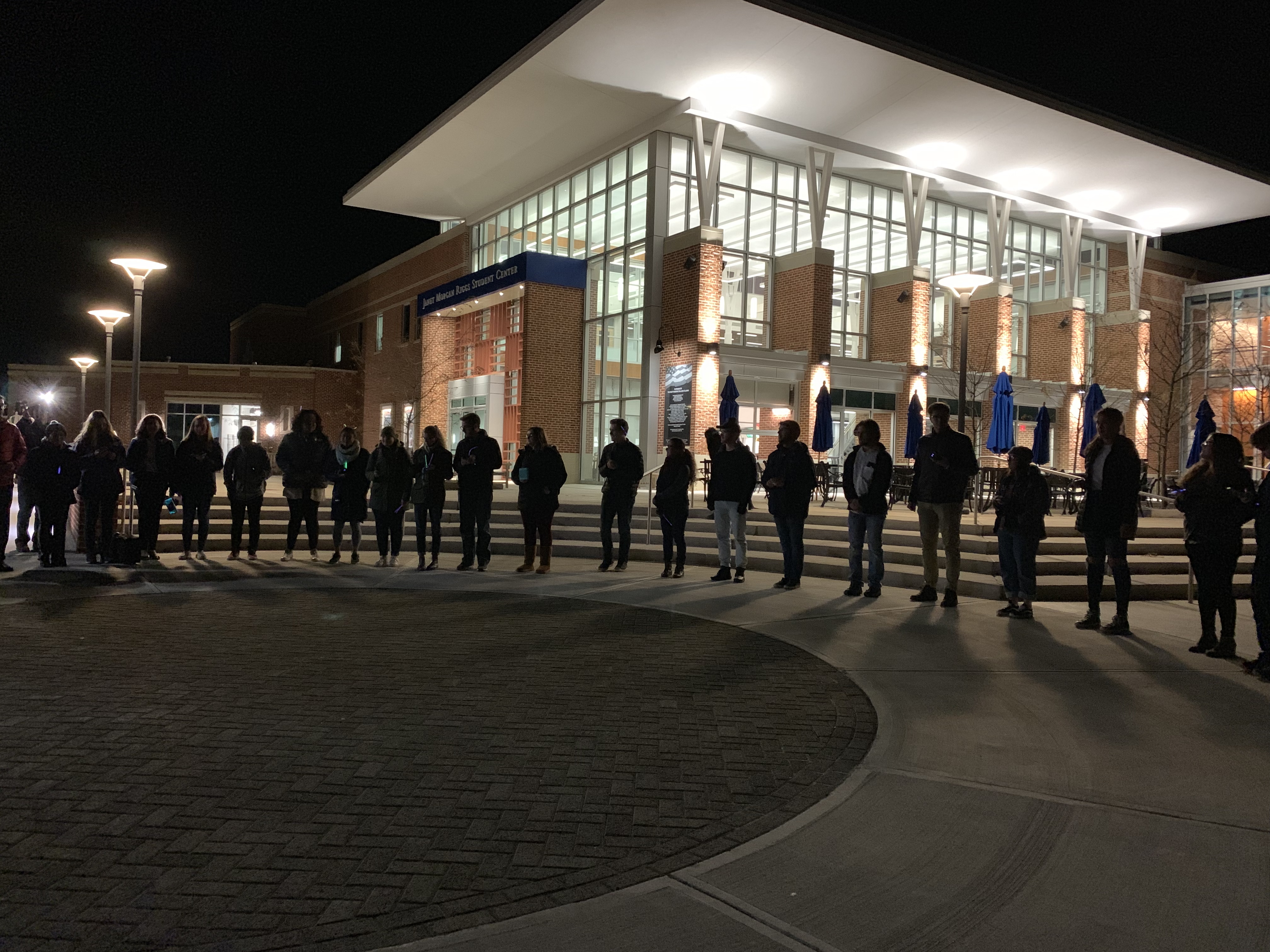 Following an open rehearsal of the Sunderman Conservatory of Music’s Symphony Orchestra, students brought out glow sticks, warm winter garments, and portable speakers to walk across campus the night of Dec. 5 and create a cacophony of sound with Phil Kline’s Unsilent Night mobile application.

The trek began at Schmucker Hall, where Music Professor César Leal and student coordinators Hera Molina ’22 and Bridget Haines ’21 instructed students to download the app in preparation for the music experience.

Unsilent Night, composed by Phil Kline, is a mobile sound street promenade experience that gives individuals with any level of music expertise an opportunity to go caroling and create a harmonious symphony, shifting the role of audience member to performer. Before the music began, Leal recommended that participants keep their talking to a minimum to allow everyone to “experience peace from within.”

“Let’s make this a very interesting sonic experience,” he said.

When the participants pressed play in unison on the application, they queued four different tracks of music. Some sounds were more prominent than others based on each perspective. The individualized music experience involved each music-maker in the production of this beautiful sound.

“[It’s a] type of music everyone can participate in because you don’t have to play an instrument,” Jessica Greenman ’20 said.

The music echoing across campus sounded at first like light chimes but intensified as the tracks continued and the group convened in a circle next to the College Union Building (CUB), creating a round wall of sound that overtook the participants. Many recorded the experience on their phones while some stood and smiled in awe.

At the end of the tracks, the group gathered at the fire pit outside of the CUB for reflections before enjoying hot chocolate. Leal solicited comments from various musicians including a member of the orchestra and a percussionist in the band. One student commented on the spontaneity of sound and the inclusion the event provides for those both inside and outside the music community. Another attempted to make sense of the noise, likening it to the wind or the night itself.

Many said that they hope Unsilent Night becomes a tradition on campus, marking the end of the semester and the start to the holiday season.

“Hopefully this becomes a tradition…it’s a fun thing to do as a group,” Molina said.

Leal precipitated Gettysburg’s execution of this event as “a way of connecting the music department,” by joining the orchestra and band as well as other members of the music community at Gettysburg. He also aimed to connect music to the campus by “[making] the campus a musical instrument.”

“[The event was a] great bonding experience for everyone in the orchestra at the end of the semester,” he said. “I hope to make it a tradition that anyone can be a part of.”