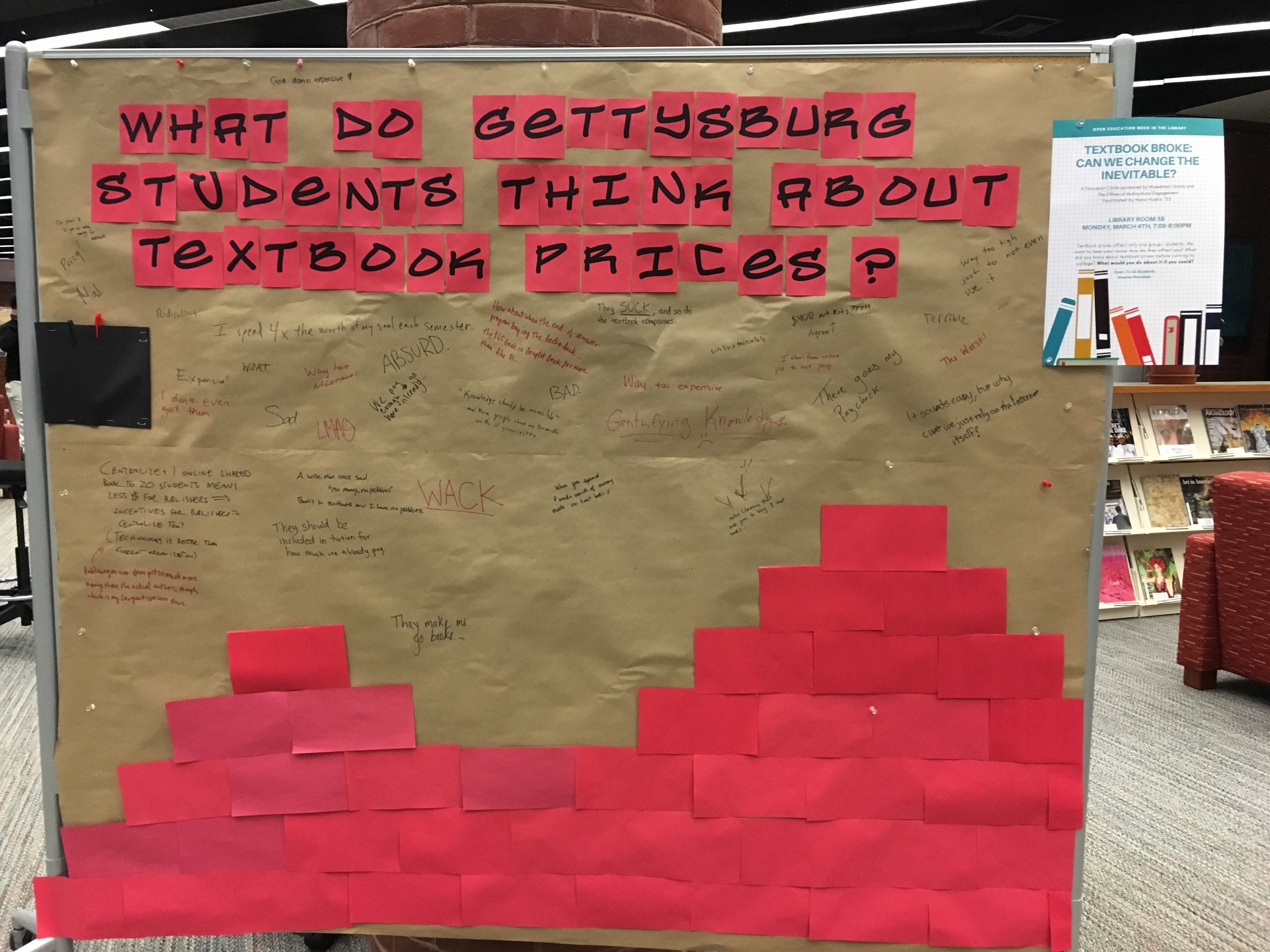 For Musselman Library’s Open Education Week, this discussion board encourages students to share their thoughts on the price of textbooks (Photo Phoebe Doscher/The Gettysburgian)

Gettysburg College has a new minor in data science. After a motion to delay the vote was defeated, the faculty voted Thursday afternoon by a 3:1 margin to approve the new minor, which students could begin to declare as soon as the spring semester.

Discussion on the proposal centered around potential hidden costs associated with new course sections that it may require and whether the Provost’s Office and Faculty Finance Committee have sufficiently accounted for such costs.

Harold G. Evans Professor of Eisenhower Leadership Studies and Associate Professor of Economics Brendan Cushing-Daniels said that, while he supports the concept of a data science minor, the proposal is “not costless” in that, beyond the five new course sections the proposal foresees, many of the elective courses proposed are regularly full or rarely run.

“I’d like us to think more about what the costs really are,” Cushing-Daniels said, noting that, although he appreciates the work of the Faculty Finance Committee, he does not think it fully accounts for what this proposal will cost. “I just don’t think that’s nearly a robust enough estimate of what the costs really are, and we are in a tough financial situation right now.”

He proposed postponing the vote until those costs could be better accounted for, a process he expressed willingness to undertake. That vote failed 55-78-8.

Bittinger Professor of Philosophy Lisa Portmess, one of the faculty members involved in proposing the minor, said that Cushing-Daniels’ concerns are common to many proposals of which she has been a part of or seen during her time at the college for new majors, minors, and programs, but that things tend to work out organically.

“The interesting and creative element in building a new program is that the very creation of the new program creates incentives all across campus,” she said. “It has this catalytic effect to build a program. It’s a very exciting effect that majors have that recreate a faculty around a new offering on campus, and that we can’t predict easily. … They’re very creative enterprises, and they change our institutional behavior as we begin to think of new possibilities.”

Assistant Dean of Musselman Library and Director of Scholarly Communications Janelle Wertzberger presented to the faculty on the price of textbooks, which, according to data she presented, has increased by 200 percent over the last 20 years (as compared to 57 percent inflation over the same period).

Textbook affordability advocates generally suggest that $40 per course is a reasonable maximum for course material purchasing, Wertzberger said, adding that a recent survey of Gettysburg students found that they placed that number around $50 per course. Regularly, though, students report course materials costing in excess of $100 per course.

Wertzberger encouraged faculty members to consider using open educational resources, content that is freely available and adaptable to meet the needs of a professor or a course, and noted that many Gettysburg faculty members have already made a switch.

“You can use them as an equity strategy,” Wertzberger said. She referenced one study showing that use of open educational resources as compared to traditional textbooks increased student grades, especially students who receive Pell Grants, a federal grant for which students whose families earn less than $50,000 annually may be eligible. 22 percent of Gettysburg’s incoming students this year fall receive Pell Grants, a number that is expected to rise in coming years.

Listen: October 2017 interview with Janelle Wertzberger and Christopher Barnes about the textbook crisis

Overall, Wertzberger’s message to faculty was one of awareness; she asked faculty members, at minimum, to know what their textbooks cost and to ask students about whether they are buying all required books, what they do when they cannot afford them, and how not having a book can affect course performance.

“It is not universally effortless to order from Amazon Prime,” she said.