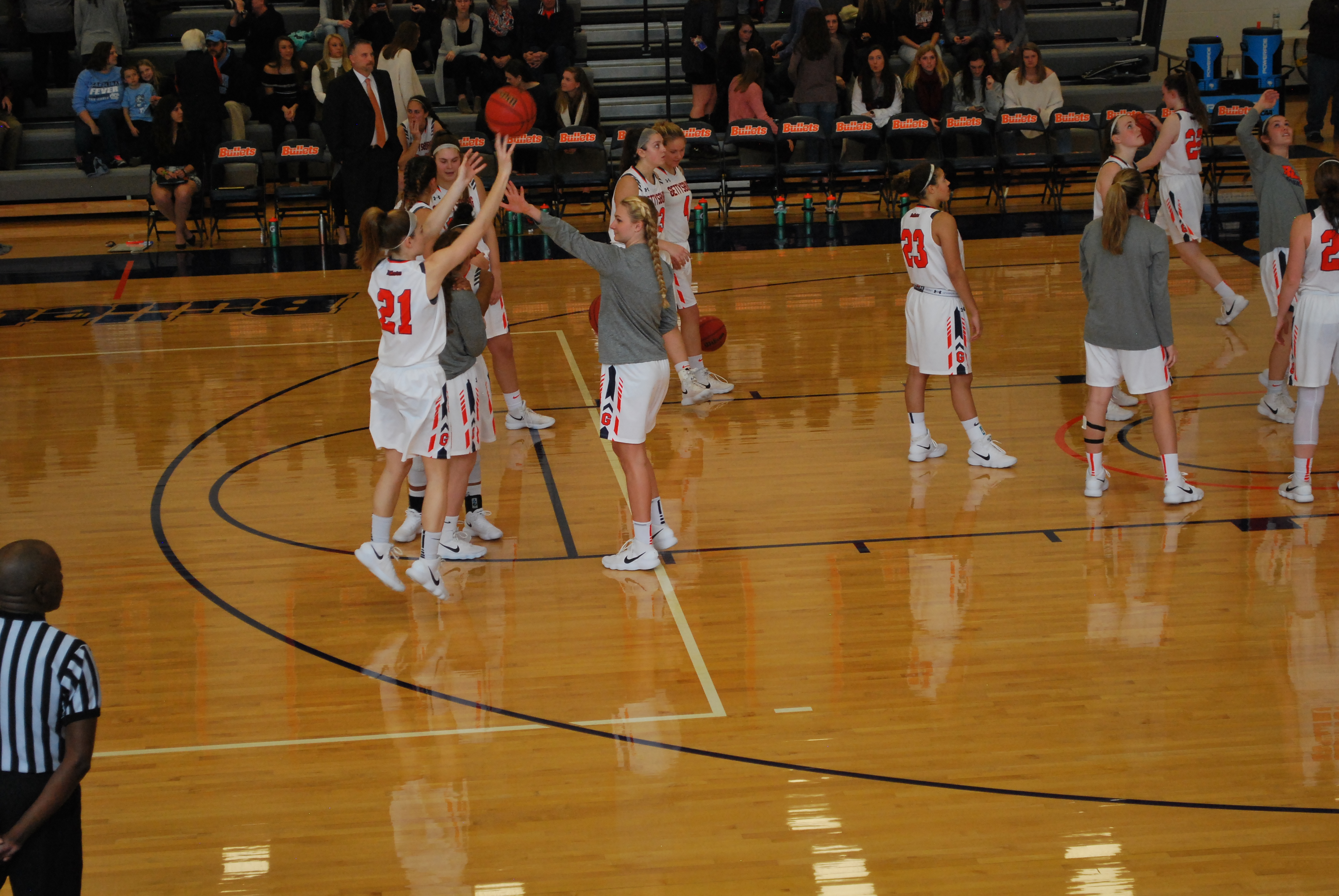 Ashley Gehrin warms up before a 2018 game (File photo)

The Gettysburg College Women’s Basketball team swept the Bridgewater Tournament over this past weekend, beating host Bridgewater 86-82 on Saturday and handily defeating Washington and Lee 72-50 on Sunday.

The performance put the team at 2-1 in the new season. During the game against Bridgewater, their victory was assured by maximizing offensive efficiency by going 9-11 on field goal attempts in the fourth quarter.

Overall, the team outperformed Bridgewater in nearly every major category. The team managed to earn a field goal percentage of 58.8 percent vs Bridgewater’s 29.1 percent, going 50% from the three point arch, contrasting with Bridgewater’s 29.4 percent.

The Bullets also bested Bridgewater in rebounds and free throw percentage. Through that performance of offensive efficiency and capitalizing on opportunities the Bullets were able to win out on the road in a competitive game.

During the game versus Washington & Lee, the Bullets managed to handily triumph again on the road to sweep the tournament. Over the course of the game Gettysburg managed to pull away from W&L by going on two separate runs, 14-6 in the 2nd quarter and 17-9 in the 4th.

The Bullets posted a shooting percentage of 51 percent compared to W&L’s 23.2 percent. The Bullets also greatly amassed a three point percentage of 40 percent while W&L was limited to 20.7 percent. Gettysburg also proved active under the rim, garnering 53 rebounds over the course of the game compared to W&L’s 23. This dominant offensive performance by the Bullets gave them their runaway victory on the road to place them at 2-1.

The Bridgewater tournament gives reason for the Bullets to be optimistic about the future of their season and their ability to overwhelm opponents with their offensive strength. A persistent concern for the team throughout the tournament would be ball security, as in both games the Bullets turned the ball over a combined 53 times while opponents gave the ball up 25 times.

The Bullets however returned back to Gettysburg with momentum from their two straight wins, hoping to capitalize on their success. The success experienced at the Bridgewater tournament is consistent with the expectation of the team this season.

In an interview with Gettysburg College Athletics on the goals of the team for this year Head Coach Nate Davis said “The goals and expectations for our season are honestly no different any year we approach it. At the end of the day, our goal every year is to try and compete for a conference championship, earn an opportunity to make it to the NCAA tournament, and to be one of those opponents that people look at every year that is going to be the team that has to challenge them to win our conference.”

The Bridgewater tournament is an example of the Bullets pursuing success in order to be a force in the Centennial Conference. The Bullets continued their winning ways on the road against McDaniel yesterday, defeating the Green Terror 66-57.

Gettysburg continues its Centennial Conference schedule this Saturday, November 23, at Swarthmore to take on the Garnet.