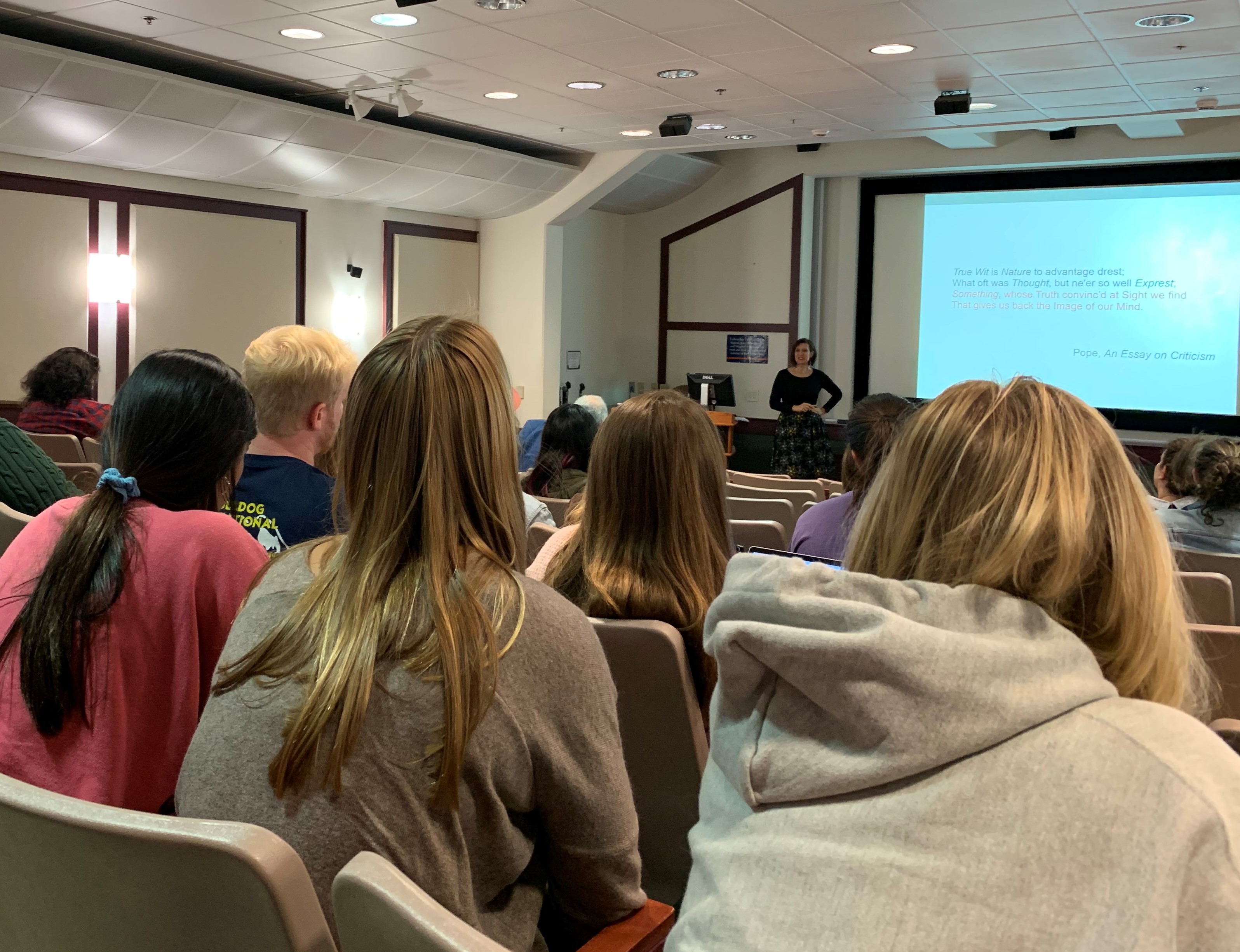 University of Maryland Professor of English Tita Chico spoke at the 42nd Annual Croll Lecture, co-sponsored by the Department of English, Women & Gender Studies, and the Events Planning and Coordinating Committee (EPACC), on Thursday, Oct. 24 in Joseph Theatre. Chico presented on “Microscopes and Couplets: Scrutiny in the Long Eighteenth Century” as part of the 50th annual meeting of the East-Central American Society for Eighteenth-Century Studies hosted at Gettysburg College that weekend, led by English Professor Joanne Myers.

Chico is an eighteenth-century scholar who specializes in literature and culture of the British restoration period. She is currently working on “Wonder in Literature and Science in the Long Eighteenth Century.”

The Croll Lecture series is held in honor of Morris W. Croll, who graduated from Pennsylvania College, now Gettysburg College, in 1889. Croll was interested in the prose style of the seventeenth century, with special interests in science and literature. The theme of Croll lectures is to merge science and literature to help get a better understanding of the world, and Chico brought the two disciplines together in her lecture by comparing and contrasting the use of microscopes and couplets to achieve the similar objective of scrutiny.

Chico referred to a 2009 cartoon of A-Rod wearing his Yankee uniform under a microscope slide to exemplify her point of looking at something “under the microscope,” or closely examining something with the objective of solving a problem. She pointed out that, under scrutiny, there is “a desire to get to the truth by examining small things,” but noted that, even closely examined, it is impossible to get beyond physical composition, as the comical nature of the cartoon suggests.

She observed practices of scrutiny in Robert Hooke’s Micrographia, which includes detailed engravings of an ant and a flea, which are considered, according to Chico, “analogous” with the process of magnifying, like one would under a microscope.

Hooke, Chico said, mentions a novel about the Barbados by Ligon, connecting it to his scrutiny of ants. The book offers discussion of slavery by comparing the swarming ants to the European colonization and exploitation of slaves in the Barbados, indicating the eighteenth-century dichotomy between politeness and good taste as opposed to economic development, and in turn, the use of slaves. Chico argued that this was an example of scrutiny being used as an opening, widening agent to uncover details.

Next, she returned back to the idea of a couplet, or “a pair of successive lines of verse,” which use verse to help understand human nature. She turned to the example of memes, which hinge parts together in a fashion similar to a couplet. “Couplets tighten,” she said, “they reduce and distill. But they’re also demanding.” As a form of scrutiny, Chico contended that couplets force you to look closer at something.

In his eighteenth century An Essay on Man, Alexander Pope asks “Why had not Man a microscopic eye? For this plain reason, Man is not a Fly.” Chico introduced the idea of possible skepticism about microscopes since Pope insists upon a difference between humans and insects and considers microscopy to be ridiculous. Further, she related Pope’s argument that human nature cannot be found by studying details, his agreement with Isaac Newton’s use of a prism as a tool for scrutiny, and interest in reliable observation.

She then referenced Pope’s couplets in “The Wit” from An Essay on Criticism, and contended that “the closeness of close reading” yields true value. In couplets, scrutiny relies on identification and both serves to reveal and must be criticized.

In conclusion, Chico reiterated the connection between Hooke’s microscopes and Pope’s couplets as objects of scrutiny; both scientific and aesthetic disciplines can be used to understand the world and ourselves. She related scrutiny to the modern day topic of fake news, which we closely examine to discern what information is true or false. Lastly, Chico gave the audience a call to action, saying that scrutiny requires us to be critical of times in history like the Enlightenment, in which we can examine how minority identities fit into social structures and can be empowered; through close examination, we can rethink encoded meanings from history.

The lecture coincided with the 50th annual East-Central American Society for Eighteenth-Century Studies Conference hosted at Gettysburg College from Oct. 24 through 26. The theme of this year’s conference was Crossroads and Divergences; the society includes various scholars of literature, history, and art history.

Attendees had the option to visit the Maria Sibulla Merian exhibit in the Schmucker Art Gallery, view first editions and rare works in Special collections at the library, and see an eighteenth-century sky at the Hatter Planetarium. Biology Professor Kay Etheridge and History Professor Tim Shannon also presented on eighteenth-century topics throughout the conference.