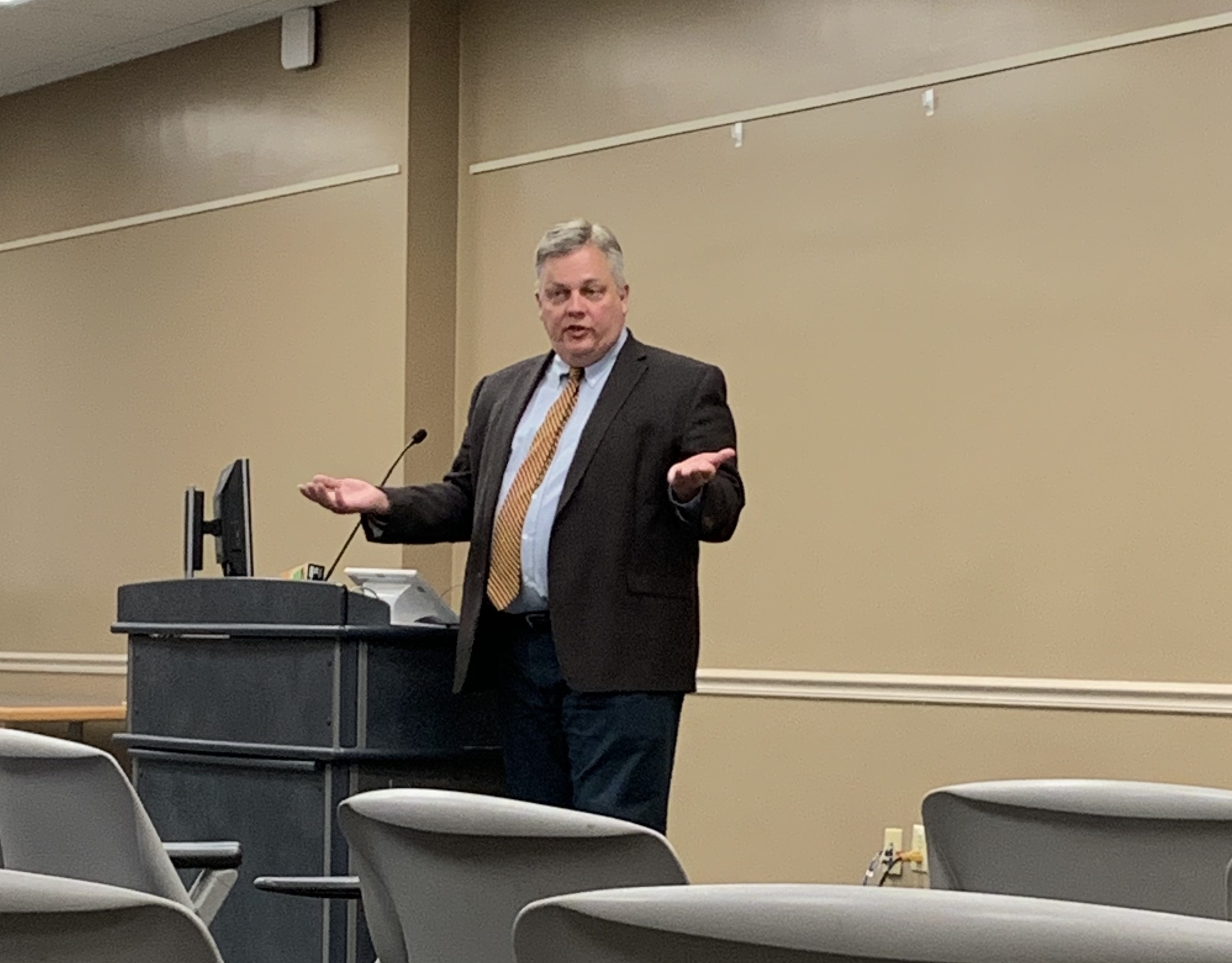 Dr. Michael Moreland presented in CUB 260 Thursday night on the intersection between religion and politics for the Annual Newman Lecture presented by the Newman Association and Catholic Campus Ministry. Moreland is the University Professor of Law and Religion and the Director of the Eleanor H. McCullen Center for Law, Religion, and Public Policy at Villanova University’s Charles Widger School of Law.

The Constitutional scholar addressed three main themes: The First Amendment, religious freedom, and separation of church and state. He stated that there has been “political debate” surrounding the First Amendment and readings thereof.

For background, he referred to the text of the First Amendment, which states that “Congress shall make no law respecting an establishment of religion.” Moreland mentioned that many have questioned the meaning of the statement. He discussed the incorporation of power to the states to enforce the Bill of Rights in the 1940s as well, since the original text refers directly to Congress.

Moreland gave historical context all the way back to the Magna Carta in the English church in 1215, before the United States was founded. “We are the inheritors of a long religious system,” he said. Americans, however, later used pre-existing establishments of the separation between religion and state in developing the Constitution; for example, John Locke, the writer of “A Letter Concerning Toleration,” which proposes a governmental toleration of religion, is known to have influenced James Madison’s contribution to the Constitution and the American Bill of Rights.

Moreland recognized four Constitutional themes in relation to the Establishment and Free Exercise Clauses that entail separation of church and state, the autonomy of the church over state control, the cooperation of church and state, and the accommodation of religion. He also identified several court cases that apply to each theme, including Engel v. Vitale, where the court ruled non-denominational school prayer in public schools unconstitutional.

Moreland also touched on the rise, fall, and, once again, rise of free exercise by referencing recent court cases regarding religious practices impacting various modern occupations, including designing a cake for a same-sex wedding in Masterpiece Cakeshop, Ltd. v. Colorado Civil Rights Commission. The Religious Freedom Restoration Act of 1993, which protects religious freedom on the federal level, although deemed unconstitutional by the Supreme Court, is a recent development in the intersection between religion and state, he said.

At the wrap of his lecture, one of the audience members asked a question regarding the rights or lack thereof of individuals to deny business on the basis of a violation of their religious beliefs, to which Moreland contended there is no clear answer.