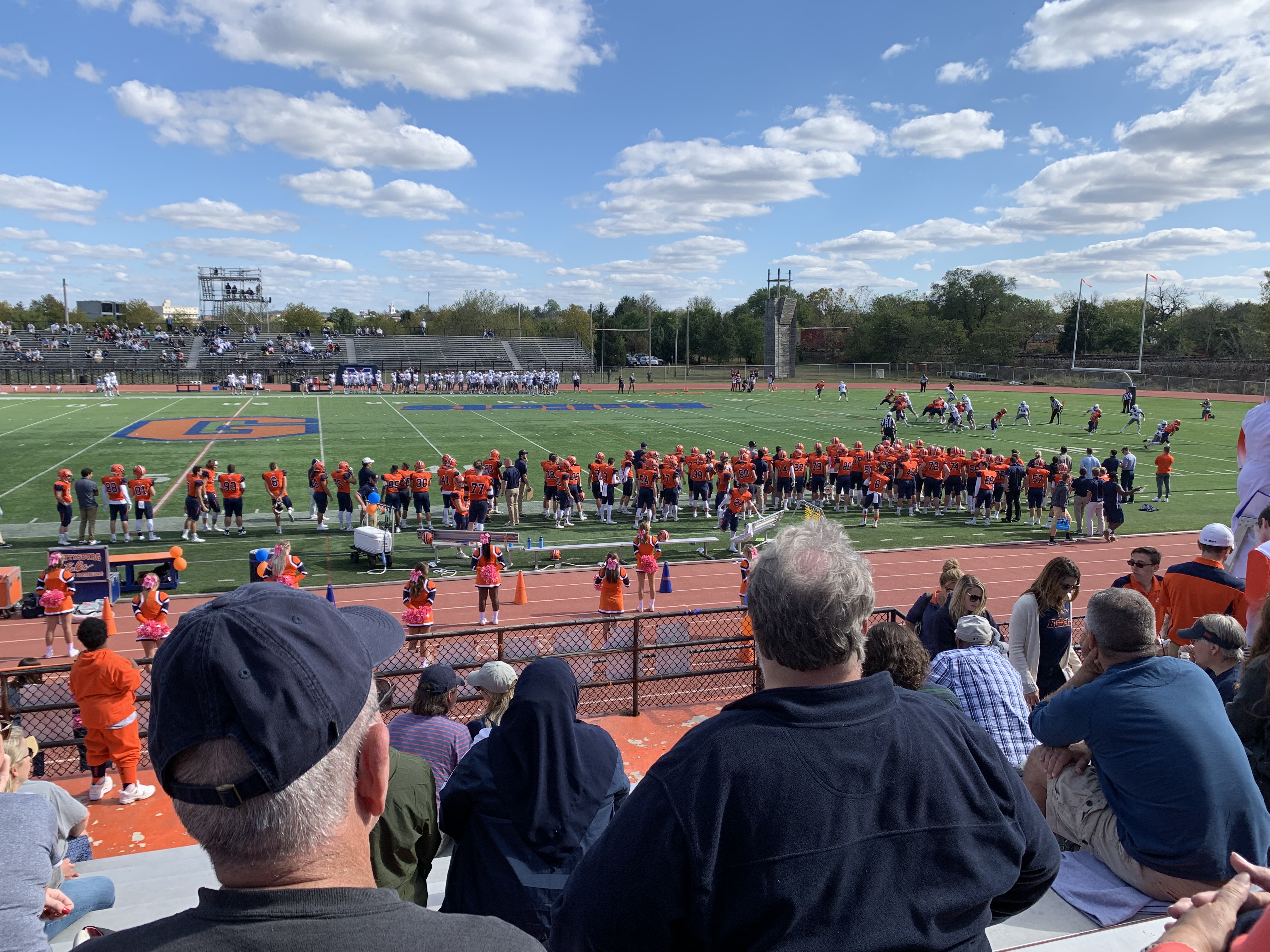 Gettysburg College and the surrounding community welcomed back alumni to celebrate this year’s Homecoming Weekend from Oct. 4-6. Alumni from all over and from a wide span of class years came back to campus to enjoy various events including panels held by various departments and alumni relations, the class of 2014’s Five Year Reunion social and photo opportunity, Greek Life picnics and reunions, and the Homecoming football game.

Enthusiastic Gettysburg College alums dressed in their best blue and orange filed into the College Union Building lobby Friday and Saturday to sign in with the alumni table and write their names on the white paper hung in the lobby to “see who’s here” from their class. Classmates from as far back as those from the 1940s and 1950s to the most recent graduates from last year were then handed various Gettysburg College merchandise and a schedule of events for the upcoming weekend.

One of the events on campus was the All Campus Lunch held at Servo, where members from all decades of previous classes joined to eat with current students. Kenzie McKowen ’23 attended a few of the events during the weekend, including the All Campus Lunch. She was “excited to see what Gettysburg College Homecoming weekend is all about” and was looking forward to seeing so many alumni come back to the campus.

The campus was filled with a contagious welcoming and cheerful energy throughout the whole weekend. From the smiles of old friends coming together again to the marching band playing in the center of campus making everyone want to dance, the energy of reunion was unmatched. The energy seemed to reach everyone, even prospective students visiting campus. A prospective student said, “the energy here is refreshing, it is so nice to see that alumni enjoy coming back and that the college welcomes them back so actively, that speaks a lot to what Gettysburg means to students.”

For some, returning to campus is a big realization and confirmation that their college experience is over. Recent graduate Maddie Morgenthaler ‘19 reflected on her return to campus and the difference in her time over the weekend compared to her four years, “It felt so good to be back, Gettysburg is my happy place. But for the first time, I realized my time here was over.” 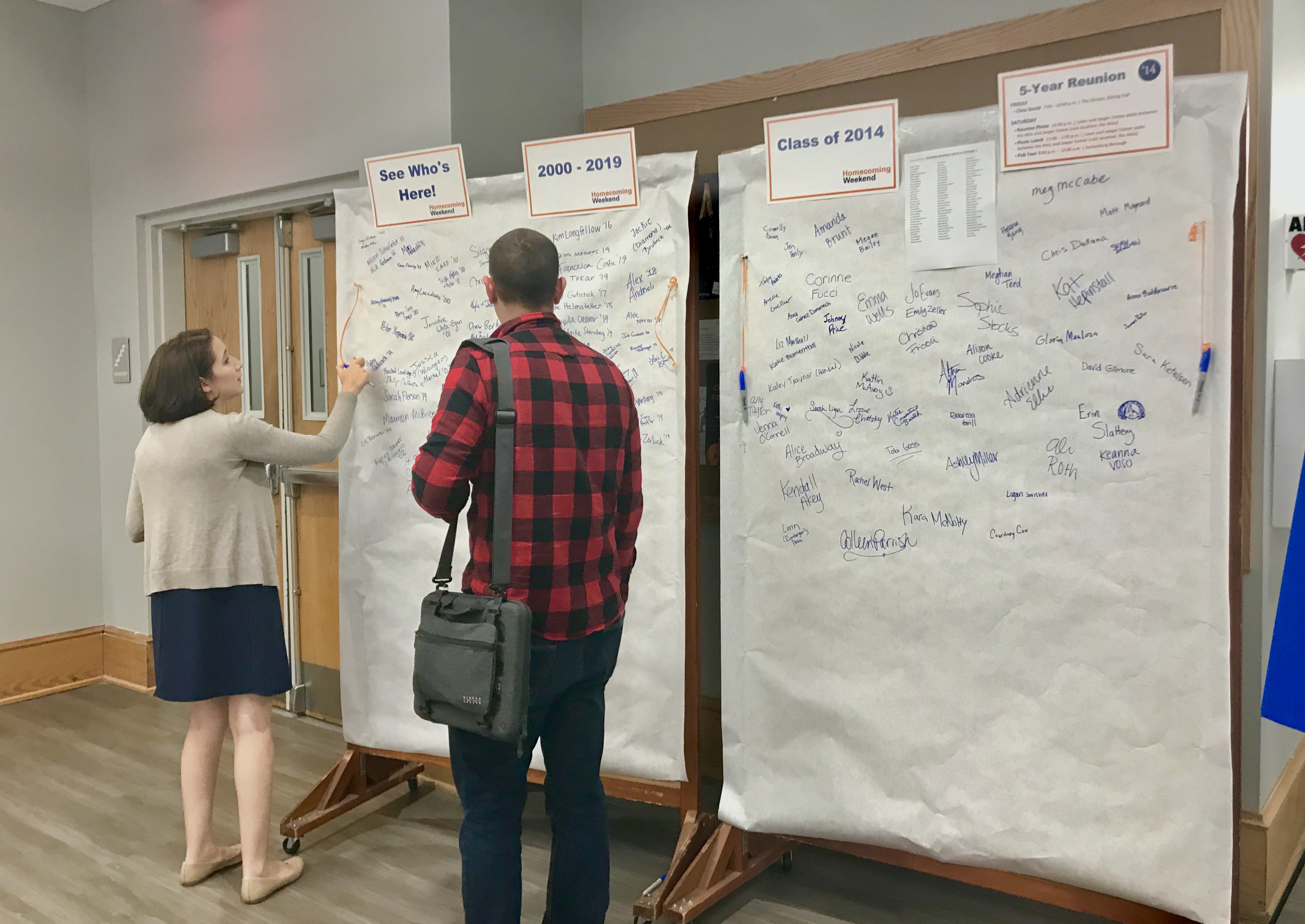 Mike Haas ‘76 and his daughter Emily Haas ‘04 decided to sit outside the CUB before they walked over to the Homecoming football game against Moravian College, and have some food from the Bullet Hole. Both were ecstatic to be back on campus and to take in all that this year’s Homecoming Weekend had to offer. Emily Haas noted that this was her second year returning for homecoming, and that she was unable to come back due to previous commitments other years, but was very happy to be back on campus again.

Mike Haas played football during his time at Gettysburg College and “loved being here together [with his daughter]” to celebrate the weekend and was looking forward to visit his old fraternity Fiji to see some old brothers from his class and new members as well.

The football game against Morivian College in Bethlehem, Pennsylvania drew in a very large crowd of energized Gettysburg supporters to Shirk Field at Musselman Stadium, though the Gettysburg football team lost to Morivian 33 to 16. The positive Homecoming spirit was not lost, however, according to Executive Director of Alumni Relations Joe Lynch ‘85 who enjoyed “ such a beautiful fall day [as this one] and our amazing band which [was] made up of not just current students, but over 40 alumni who joined to play this game.”

Gettysburg’s newly-inaugurated President Bob Iuliano was also present at the game to celebrate his first Homecoming Weekend, alongside students in the Class of 2023. President Iuliano was thrilled to experience what Homecoming is all about at Gettysburg and noted that “[this weekend] is a wonderful chance to come together with alumni and current students alike to build a strong sense of community between one another.”

Many students involved in Greek Life reunited with their graduated brothers and sisters through various social events, some they knew and also new faces.

Sofia Taipina ‘22 reflected on the opportunity to meet Gettysburg community members that are no longer on campus: “It was exciting to see people who were once in your shoes before, now living in the real world successfully. It was meaningful to hear their experiences and personal stories,” she said. “Gettysburg was where they grew and were able to find their place. It makes me feel so proud to be a student here, but also hopeful that one day I will be able to come back and share my own personal story of success.”

The festivities continued through the night with the All Campus Attic party. The party allowed current and past students to come together in a fun and casual setting to end the jam-packed weekend.

Homecoming, which directly followed the weekend of President Iuliano’s inauguration, made for a memorable two weekends at Gettysburg this fall. Past, present and future Gettysburgians came together once again to celebrate the college and the community built around it.