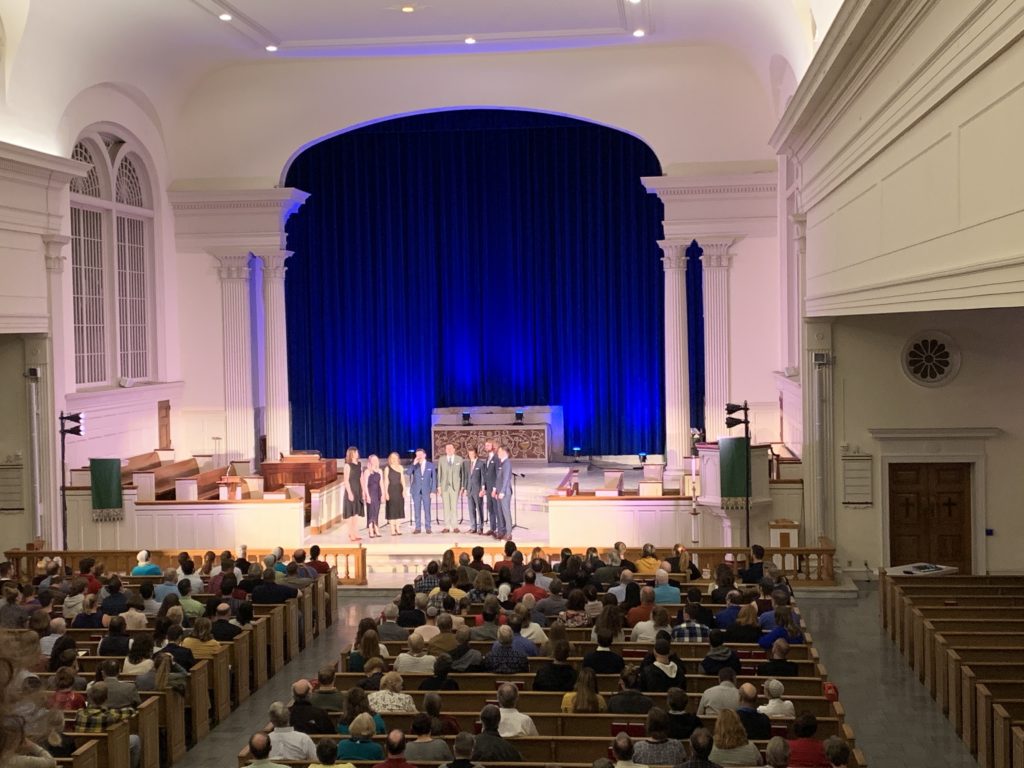 On Friday, October 25, the premier British vocal octet VOCES8 performed for the Gettysburg College community in the Christ Chapel on campus. The group includes eight singers, two from each voice part of soprano, alto, tenor, and bass, including Artistic Director Barnaby Smith. They are widely known for their extensive repertoire and distinguishable vocal expression through a cappella performances and in collaboration with conductors, soloists, and orchestras.

The group arrived on campus with Co-Founder Paul Smith, who led the Gettysburg College Choir in a workshop on Thursday afternoon, showing students firsthand the VOCES8 dedication to music education and utilizing the “VOCES8 Method,” a teaching tool to enhance development in “numeracy, literacy, and linguistics,” according to the group’s biography.

VOCES8 performed 13 pieces during the concert; they grouped some together purposefully, including the three-song set “Songs of Farewell” and two modern-day pieces, “The Road Home” and “Let My Love Be Heard,” asking the audience to hold their applause until they finished the set. Their repertoire spanned from classical pieces in the 1500s to the present. They had a short interval to space out the almost two-hour concert.

The singers spoke about the meaning behind some of their repertoire, one of which was written by their Composer-in-Residence Roxanna Panufnik, whom they have commissioned pieces for in the past.

They stood in a semi-circle while they performed, sometimes switching around the order to provide the audience with the optimal auditory experience, and they vacillated between singing in a booming fortissimo that filled the chapel and using a quiet, whisper-like sound. Their dynamics, vocal technique, and seamless coordination made for a breath-taking choral experience.

“The concert was jaw-dropping. I’ve never been so engaged throughout an entire performance, and I’ve never heard so much sound come from only eight people,” Allie Charney ’22, a member of College Choir, said.

Gettysburg’s College Choir, along with other musicians on campus, plans to continue to use the lessons they learned from Smith, and from the practice of watching the concert, to influence their own performances.