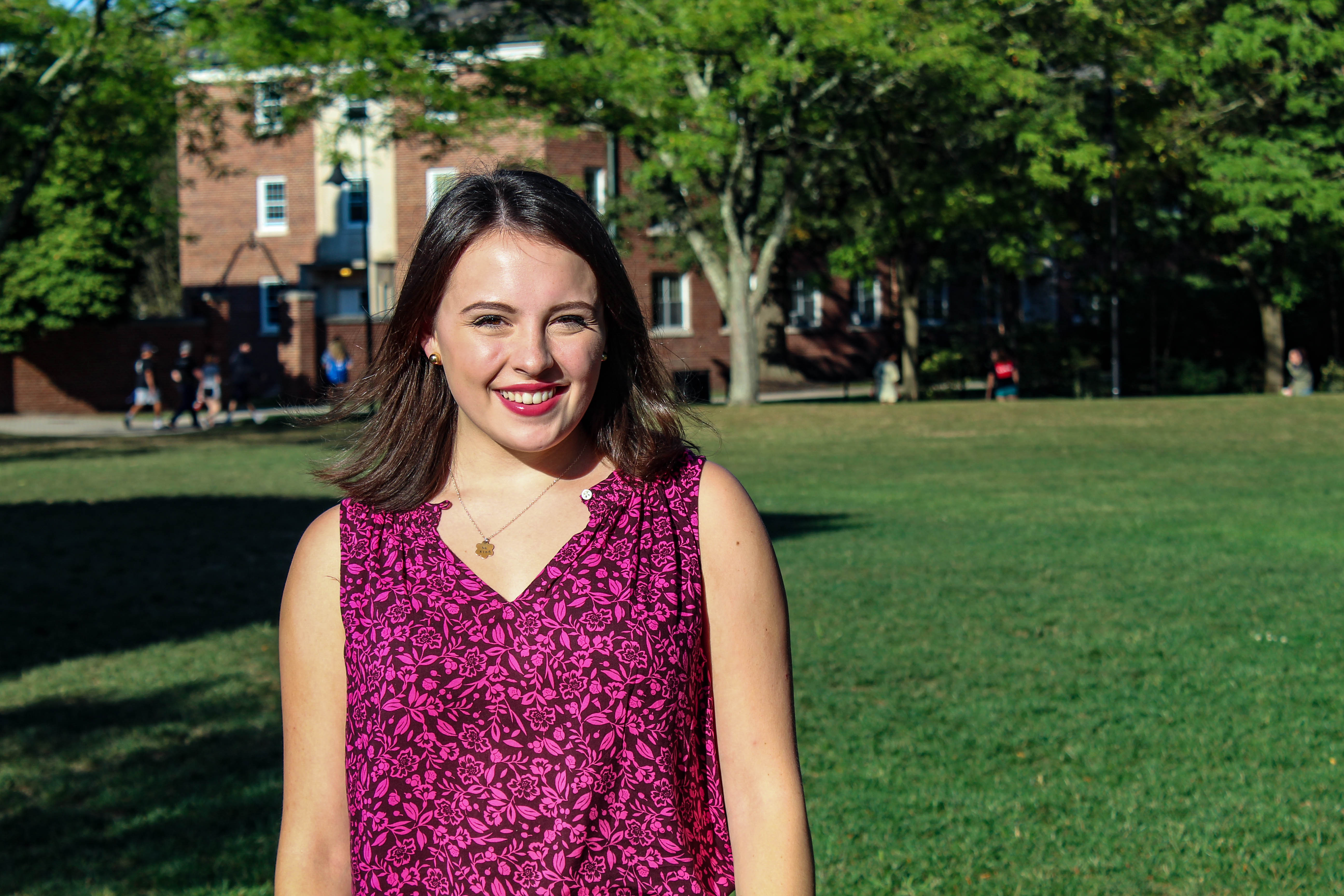 I relax to the hum of my white noise machine emanating airplane-whoosh while I lie in bed in my dorm room at college. I clutch onto a tattered prayer shawl, making sure I nestle it in the curvature of my stomach, completing my nightly ritual before I drift to sleep. The shawl was once a carefully knit piece of fabric, but has deteriorated over time into long strands of yarn held together by knots.

I acquired that shawl in the wake of the Sandy Hook Elementary School shooting that rocked my community in 2012. At the time of the shooting, I was in seventh grade and my younger sister, eight years-old at the time, was in third grade. She was in the school that day. Scores of donations, from paper snowflakes to rubber ducks, made their way to our small Connecticut town from across the nation six years ago. Since then, handcrafted, physical manifestations of thoughts and prayers have decorated our homes, schools, and now, dorm rooms.

And the white noise machine I mentioned earlier? I’ve gotten into the routine of using that ever since the tragedy to help drown out any miniscule noise that I might perceive as a threat while trying to drift off to sleep. By now, I can get by without it, but years ago, I would lie wide awake at night, too scared to fall asleep without the droning noise to calm my hyper-sensitive mind.

Every day since the tragedy has been a practice in what we were told was the “new normal”— an unfathomable reality you never imagined possible. There is truly no guidance, no instruction manual that can prepare you for this sort of thing. Unfortunately, in today’s society, more communities have to learn how to proceed in the wake of a massacre. Our community exhibited growth and resilience, relying on kindness, love, and activism to rise above the devastation.

To this day, the weeks and months following the tragedy are a blur to me and my family, as I’m sure is the case with other members of my community and any community that has experienced tragedy. I can piece some moments together here and there, but my mind always goes back to the same initial moments: The sound of helicopter blades slicing the air over my house, the sirens and news presence, the ironically jubilant Christmas songs that still catapult me back to that time, and the shared feeling of pure dread and terror throughout the community at the unthinkable nature of our new reality.

A full year after the tragedy, my family and I traveled to my aunt and uncle’s house in New York for the weekend. The one year anniversary stirred up a lot of reminders and sadness within my family and the town as a whole, so we were relieved for the change of scenery.

I felt the need to do something. And not just make gingerbread houses and bake cookies with my cousins, but actually make a difference. So I decided to hand out candy canes. I carefully hand-wrote tags with phrases like “We choose love,” “God Bless SHS,” and “Be kind,” tied each of them to candy canes, and filled them into a basket. I handed them out at the grocery store in my aunt and uncle’s town. Busy town-members hustled by, knocking off items on their to-do lists, but some stopped and accepted one, exchanging a sad, knowing smile with me and my dad.

Even though I had cried that night, still completely unsure, a year later, as to how to comprehend the massacre, I was touched that I made something of an impact on others and reminded them that there is still love and kindness in the world, even when you come from a place that one day felt empty of it.

“My mindset suddenly shifted. My sister is a survivor, I thought to myself. She could’ve died that day.”

Oddly enough, I hadn’t fully come to terms with the fact that my sister very well could’ve died that day until this year. Of course, I always knew it was logically true, but one day not too long ago, it hit me.

I remember having a strong emotional realization in March of this year, while I was on my way back to Gettysburg from a class trip to Washington, D.C. I had just read about the recent suicides of two Parkland survivors—a reminder of the lasting impact of gun violence on members of the community.

My mindset suddenly shifted. My sister is a survivor, I thought to myself. She could’ve died that day.

Even though I was on a bus filled with students, nothing stopped the tears from streaming down my face. I turned off my phone to silence the news notifications and sobbed as quietly as I could as the pieces of the puzzle fit together in my head.

Luckily, it was nighttime so the entire bus was cloaked in darkness and no one noticed that I was crying in a public setting. Though I kept to myself that night, I quickly sought out help coming to terms with the heart-breaking reality of the tragedy in my town and ever-growing occurrences of gun violence in America.

The Washington, D.C. trip came a mere four days before Jeremy Richman, father of Avielle, a Sandy Hook victim, took his own life. My mom texted me that day, ensuring I heard from the news from her first—my heart sank to the bottom of my stomach and my eyes welled up with tears knowing another life had been lost in the aftermath of a shooting.

I had always viewed Jeremy as a beacon of hope and resilience in our town. He co-founded the Avielle Foundation in honor of his daughter after the tragedy. The foundation works to prevent future tragedies through research of the brain’s tendencies towards compassion and violence and by educating communities. I’d attended a few of the foundation’s Brainstorm Experiences—talks and workshops to raise awareness surrounding brain health. He was passionate, well-spoken, and brilliantly dedicated to preventing future tragedies.

In the days and weeks following Jeremy’s passing, my mindset began to shift. Why were so many communities impacted by senseless acts of violence? What could I do to end this cyclical routine of learning of a new community impacted by gun violence and then reverting back to fear and sadness?

I wished so badly to return home. I wanted to hug my family and seek collective comfort in my community while mourning another substantial loss. Then, I recognized the power of my new community in Gettysburg. Everyone I knew was compassionate and willing to advocate for their beliefs. I had a strong foundation of friends and allies who enhanced my life with their consistent kindness and love, just like my community at home.

“Instead of lying awake at night in fear, I began to research and plan to bring gun violence prevention activism efforts to the school.”

Then, I recognized the power of my new community in Gettysburg. Everyone I knew was compassionate and willing to advocate for their beliefs.

Instead of lying awake at night in fear, I began to research and plan to bring gun violence prevention activism efforts to the school.

That week, I decided to start a chapter of Students Demand Action for Gun Sense in America at Gettysburg College. Instead of lying awake at night in fear, I began to research and plan to bring gun violence prevention activism efforts to the school.

I tried to remain invested in other endeavors for the rest of the semester, but all I could think and talk about was Students Demand. Even people who had heard my spiel and grand plan multiple times over were subject to me going on long tirades about potential events and meeting ideas. I’d found a healthy way to channel my fear into activism and change.

The national organization of Students Demand officially approved the chapter over the summer.

I started listening in on National Leadership Calls, watching training videos and tutorials from Gun Sense University Online, and feverishly planning potential meetings and events that we could hold at Gettysburg.

I feel empowered and inspired, my heart consistently overfilled with joy just like the day I hand-wrote tags with reminders to spread kindness and distributed candy canes. I am ready to start educating others on the effects and facts of gun violence and gun legislation, and to lead discussions on the impact of gun violence and the path to ending it. I plan to hold to hold kindness and service events, bring members together to write letters to Senators, members of Congress, and legislators, and invite speakers to campus to provide new perspectives on the issue. I’m ready to use activism to finally channel my ongoing fear of living in a country where no one is safe from gun violence.

The Gettysburg College chapter of Students Demand Action for Gun Sense in America is officially approved as a club on campus, and I am the Co-Founder and President. You can join and take action to fight gun violence with me, but just know that these are the reasons why I’m fighting to end gun violence in America: 26 members of my community died, and I no longer want to bear witness to more communities that have to live through the same thing mine did. I don’t want anyone in America to live in fear anymore. I’m going to do everything in my power to make sure that my sister, my loved ones, members of my communities in Sandy Hook and Gettysburg, and any community in America never come close to dying by a gun again.

This article appears on pages 18-20 of the September 26, 2019 edition of The Gettysburgian’s magazine.