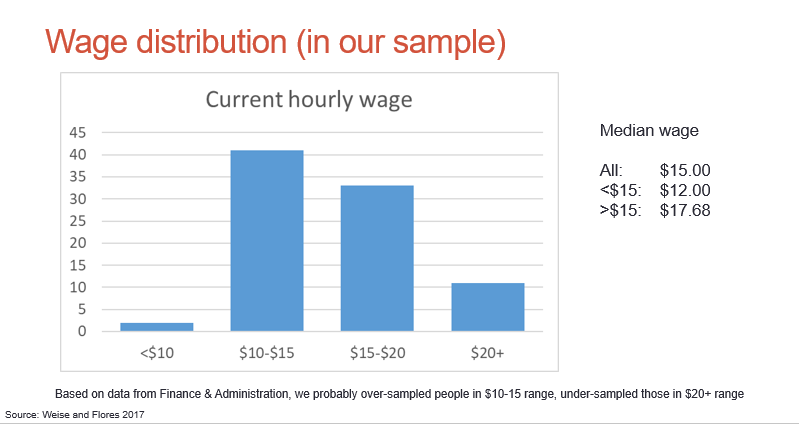 In the spring of 2019, the Campus Climate Committee submitted a formal request to former President Janet Morgan Riggs to add members of the support staff to an existing compensation and benefits committee that would look specifically at the issue of low support staff wages. The issue was not pursued by Riggs before she retired.

According to Co-Director of Human Resources Jennifer Lucas, “President Iuliano is aware of the issue,” but has yet to make a judgment about the next steps.

According to the presentation, 38 percent of full-time workers at Gettysburg College who earned less than $15 an hour and are the sole income earner have dependent children or adults living with them, and 21 percent have children under 18 living with them.

In order to compile the results for their 2017 presentation, Weise and Flores conducted their own survey at an all-campus picnic. “[The survey] got a good response and a lot of comments from the staff,” Weise said. “Many of them said that this was something that they had been worried about, complaining about for a long time… Part of the goal of the survey was to get people talking about it.” 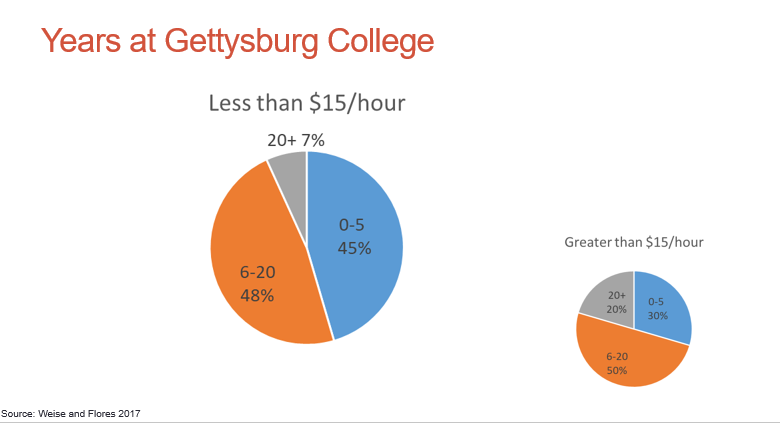 Support staff include employees in Dining Services, Facilities Services, Public Safety, and paraprofessionals (administrative assistants). In terms of addressing issues related to support staff employees, Gettysburg College has a Support Staff Council, comprised of nine rotating members, which works with the co-Directors of Human Resources and is “committed to improving the quality of work life for support staff employees of the College and to building a sense of community among support staff, faculty, administrators, and students.”

“Without support staff, your meals would not be prepared, your dorms would not be cleaned, our beautiful campus would not be maintained, and nor would any of the other do for you the students and countless behind the scene tasks we our campus community,” Food Production Worker/PM Chef in Dining Services and member of the Support Staff Council Derek Brenneman said.

The issue of low support staff wages was first brought to Weise’s attention while speaking to staff members and hearing their frustrations following the release of the 2016 Campus Climate Survey. Staff voiced their concerns about low salaries in the 2016 survey, and one of the themes that emerged in the open-ended comments was that “salaries could be higher and more competitive, especially for lower-level staff and/or long-term staff.”

Although the survey found that most employees were satisfied with the benefits the college offers, many felt that long-term employees were not being rewarded for their dedication.

Gettysburg’s benefits package includes items such as healthcare and tuition for dependents, and Weise and Flores’s research indicated that the benefits are “comparatively generous” to other colleges and universities in the region. Nevertheless, those benefits are not enough, some support staff members say.

“There are low wages, and many of the reasons people come to work for Gettysburg College are for the tuition benefits for their dependents,” Support Staff Council Chair and Academic Administrative Assistant in Theatre Arts Carol Coon said. “But benefits don’t put food on the table.”

Since the Campus Climate Survey was released three years ago, staff has continued to voice concerns about their low wages.

“The support staff community, specifically dining employees, on this campus are marginalized and in my opinion under appreciated. While we are very grateful for the incredible benefit package we are offered by the college, our wages do not reflect the work we do here nor do they reflect the rising cost of living, tuition, and inflation,” Brenneman said.

Weise referenced in his presentation that the low wage problem expands throughout the nation.

“It’s not an issue that’s specific to Gettysburg College. There’s a low wage problem in the country as a whole,” he said.

A profile of low-wage workers at Gettysburg College

Weise said that, although low wages are a national problem, Gettysburg College may still be able to be a part of the solution.

“They are always trying to make wages more fair across the board. Where are they going to get the money? If money wasn’t an issue, they would have done it.” – Carol Coon

Coon said that, while she believes wages need to increase, she does not fault the college given the financial reality that exists.

“They are always trying to make wages more fair across the board,” she said. “Where are they going to get the money? If money wasn’t an issue, they would have done it.”

This article appeared on pages 12 and 13 of the September 26, 2019 edition of The Gettysburgian’s magazine.