By Phoebe Doscher and Nicole DeJacimo

The Class of 2023 participated in a five-day Orientation, starting on Wednesday, August 20th, which was chock full of immersive activities to prepare students for their next four years at Gettysburg College. Two Orientation traditions–the First-Year Walk and GIV Day –allowed students to immerse themselves in the community both by making the historical excursion through town to the Soldiers’ National Cemetery at Gettysburg and by participating in community service to enhance Gettysburg and the surrounding area. 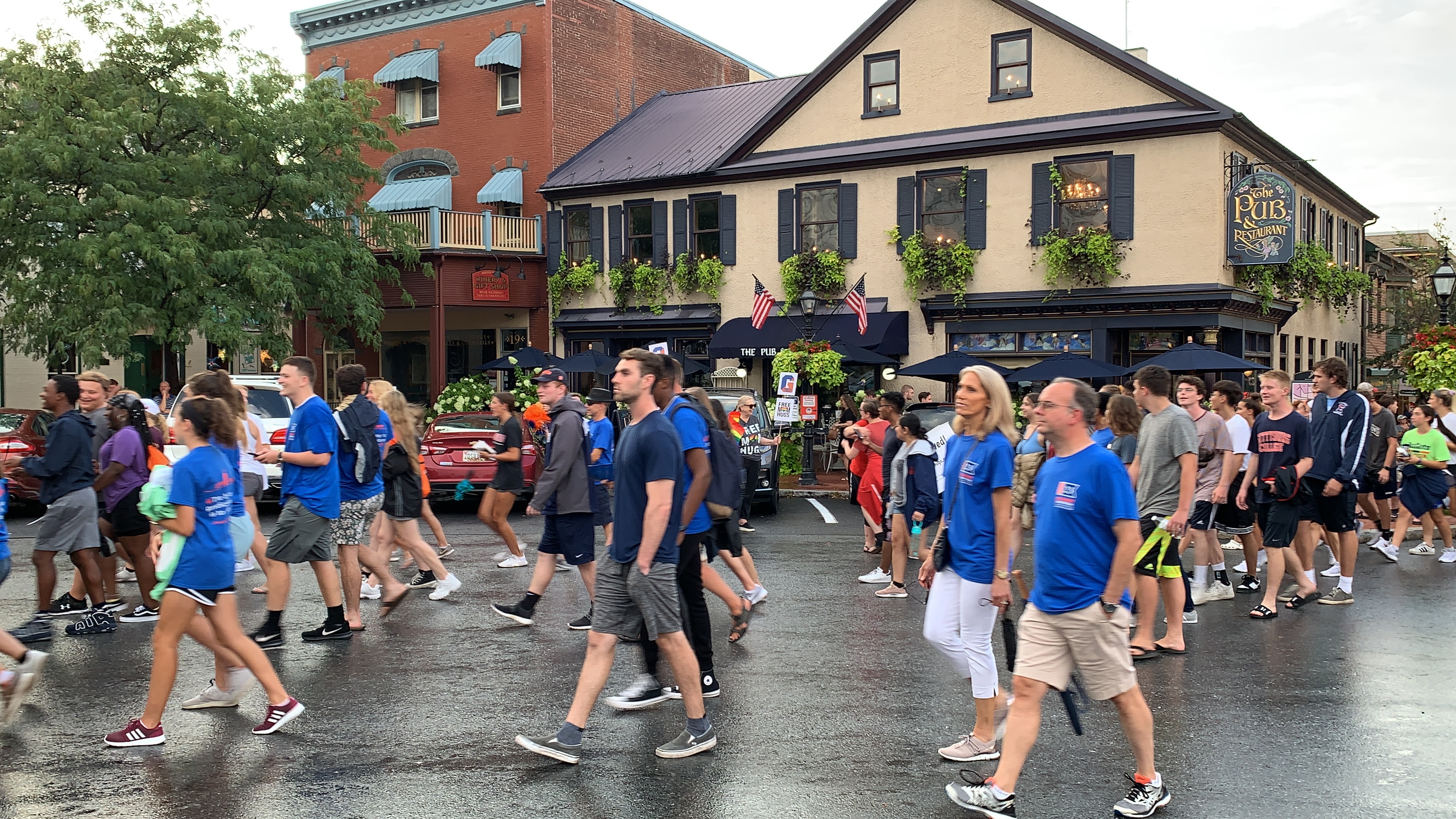 The Class of 2023 started at Gettysburg College’s Christ Church and ended their walk at the Soldiers’ National Cemetery at Gettysburg (Photo Nicole DeJacimo/The Gettysburgian).

After a tumultuous second day on campus for the Class of 2023 on Thursday, August 22, including a campus-wide power outage, torrential downpour, and extremely high temperatures, everyone congregated for one last event to round out the day: the First-Year Walk.

President Bob Iuliano noted in his brief remarks to students prior to making the walk that this annual event is “more than a tradition,” since it only happens on this campus. Yet, this event also spreads into the town, giving community members a chance to cheer on the newest crop of students entering Gettysburg College as the first years march through the center of town.

The First-Year Walk continued without a hitch despite the earlier challenges of the day as students walked from Christ Chapel on campus to the Soldiers’ National Cemetery, snaking their way through the town circle and passing by various storefronts, where some were generous enough to offer coupons and merchandise to students, including the famous “Free Mr. G’s” ice cream card.

The Bullets Marching Band was situated in the town circle as well, providing an upbeat soundtrack to the walk. Some students even stopped for Free Mom Hugs from moms holding both rainbow- and blue-and-orange-colored signs. 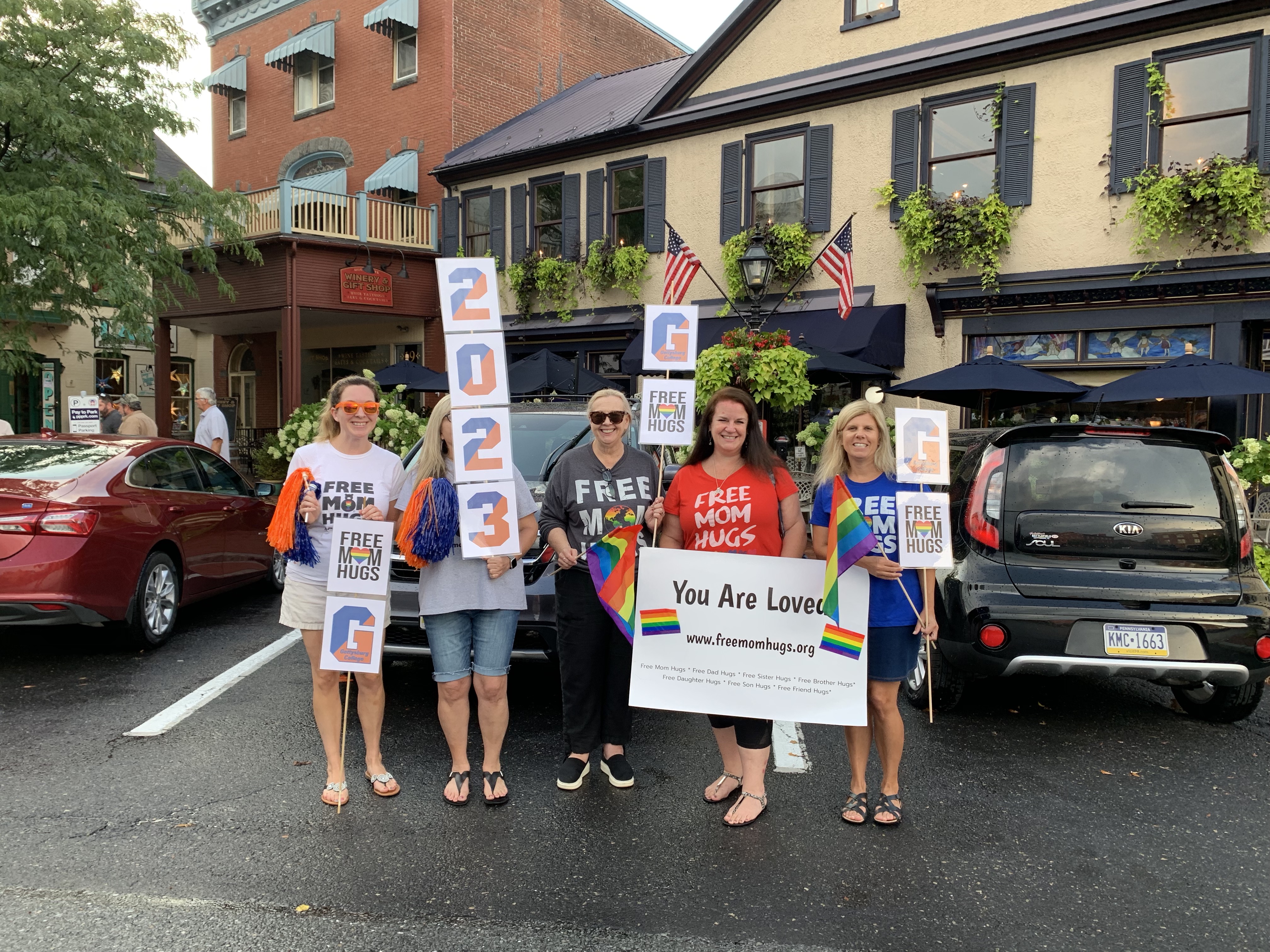 Once students arrived at the cemetery, they were motioned to remain silent to show respect for the fallen. They entered the cemetery in united silence, taking in the monuments and grave markers. They noted history, both in the past and in the making, as they made the annual walk completed by Gettysburg first-years since 2003, and simulating the trek made by community members just before Abraham Lincoln delivered the Gettysburg Address in 1863.

For the first time, the entire first-year class had a chance to merge into the history of the town and college, prior to starting their college careers.

“The first year walk was really meaningful to me,” Izzy Ouellette ‘23 said. “I got to see the huge support of all the other students, professors, faculty, and especially the community. I feel very close to Gettysburg College, the town, and the history.”

Students chose to stand rather than sit on the sodden grass while listening to the speakers. They heard Eric Gabriel ‘22 sing the National Anthem and Orientation Coordinator Julianna Pestretto ‘21 give her opening remarks. 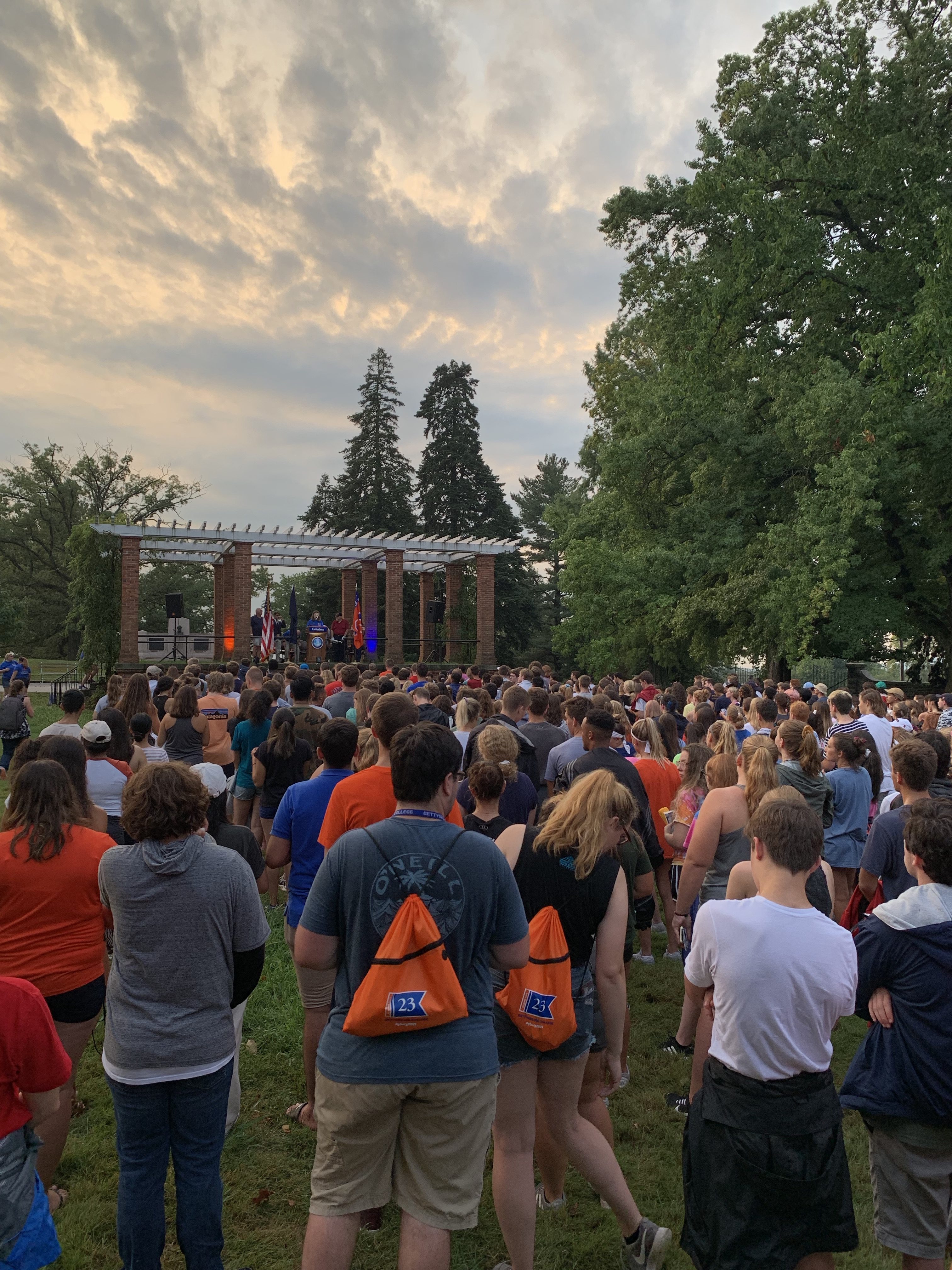 Students gathered at the cemetery to listen to Matthew Moen deliver the Gettysburg Address, among other speakers (Photo Nicole DeJacimo/The Gettysburgian).

Gettysburg Borough Mayor Theodore Streeter took to the podium to enlighten students on the historical significance of the Gettysburg Address. Although President Lincoln was not the featured speaker the day he gave his two-minute address, it is still acclaimed as one of the greatest speeches of all time, he told the Class of 2023.

Mayor Streeter then presented a key to the city to Thia Anayoku ‘23, who represented the first-year class.

Next, President Iuliano addressed the students, echoing Streeter’s comments about the significance of the Gettysburg Address, and asked them to pause and reflect on “how you might use your education to further Lincoln’s charge.”

Afterwards, Moen commented, “By enrolling in the Class of 2023, you’re part of the remarkable Gettysburg story,” and he welcomed the class into a community of scholars, complete with a new president and friends for a lifetime.

Finally, he advised the class to “shake free and think about how we can strengthen democracy,” calling upon the skills and qualities of a strong nation that Lincoln described in his famous address.

Before the students made their way back to campus, they listened to a performance of “Taps,” remaining silent at the end and returning to the hushed trance under which they entered the cemetery.

The long-standing tradition of the First-Year Walk remains an illuminating and welcoming experience for the new arrivals on campus.

Robert Rosenberg ‘23 captured this feeling in words: “My favorite part of the first year walk was actually feeling a part of such a small yet supportive community where everyone wants to see everyone succeed over the next 4 years.”

Students will now enter their next four years at Gettysburg after being formally welcomed into the community, fully equipped with the task that Lincoln set out for them in his address: “to be dedicated here to the unfinished work.” 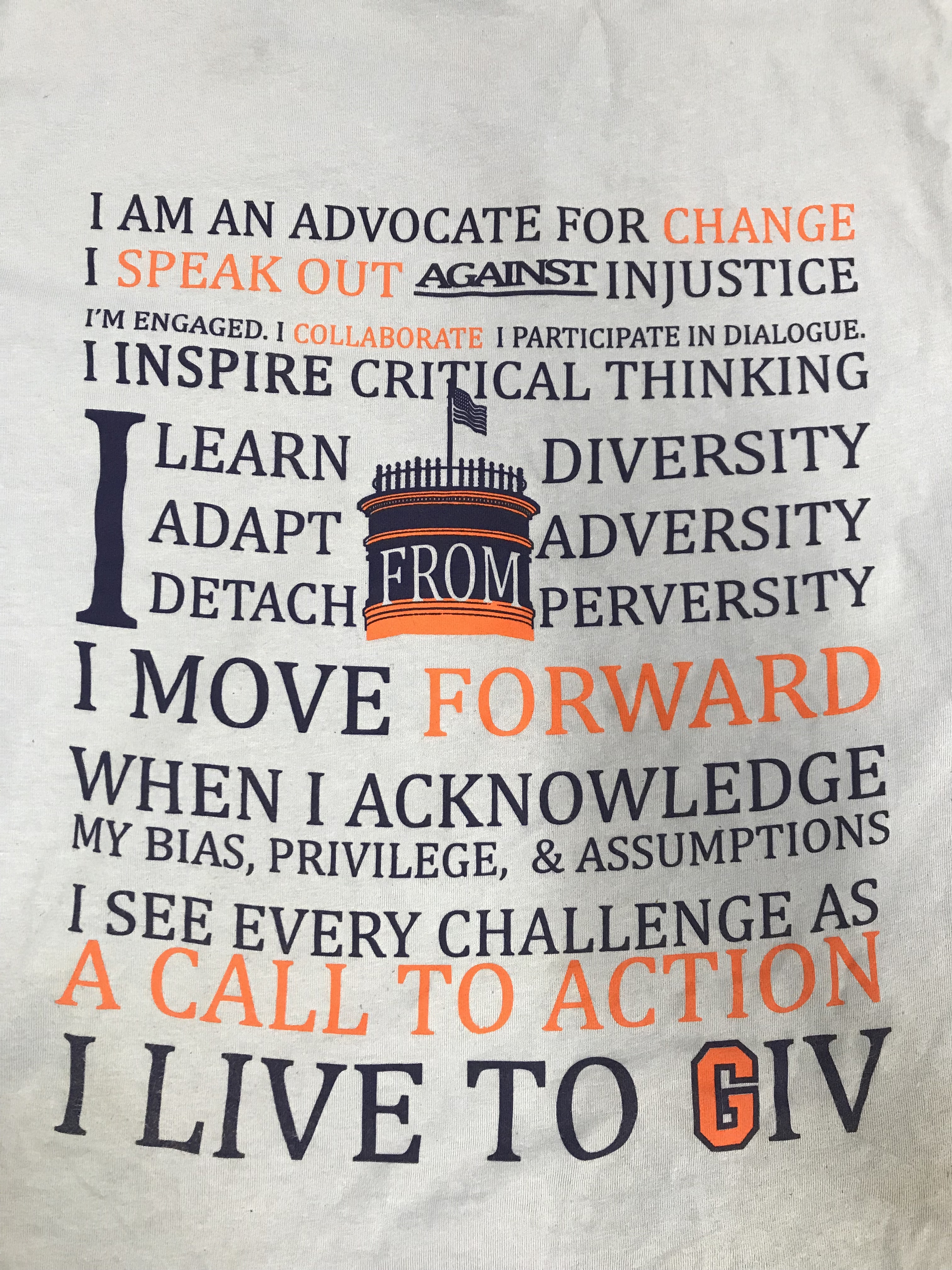 The graphic on the back of students’ GIV Day t-shirts described the values they upheld throughout their community service work (Photo Nicole DeJacimo/The Gettysburgian).

On Friday, August 23 of Orientation week, a select group of first-years implemented the advice given by Chaplain Kristin Largen during the Opening Convocation ceremony: “Set your intention to hospitality towards your new Gettysburg family.”

A group of students in the Class of 2023 continued a 28-year Orientation tradition by participating in GIV Day, sponsored by the Center for Public Service (CPS) and otherwise known as “Gettysburg is Volunteering.”

Students crowded around tables in the CUB Ballroom early in the morning to simulate extreme cases of poverty. Kickstarting GIV Day with a poverty simulation proved a useful precursor to challenges in weighing perspectives that the Class of 2023 might face throughout their time at Gettysburg, but the exercise also prepared them for a day of giving back to individuals in need.

The volunteers were split into small families, where their ultimate goal was “to find a job and [survive] for one month at the average poverty line,” Erin Keener ‘22, a CPS volunteer explained.

As if the torrential downpour before the first-year walk wasn’t enough, the skies opened up on the first-years and CPS volunteers who trekked out into the mud in Sherfy Garden, the Painted Turtle Farm, and other various spaces to give back to the community.

Seth Prince ‘23, who was lucky to avoid the rain by volunteering in the Campus Kitchen, said, “I had no idea how much just cutting tomatoes could mean for my community.”

Some students braved the weather to help out at the food pantry (part of the South Central Community Action Programs, or SCAAP), weed at the college-owned Painted Turtle Farm, and wash vans at Work Ready, which is also a part of SCAAP. Others took part of the Gleaning Project, an SCAAP nonprofit that aims to reduce food insecurity and ensure that crops are grown on local farms by creating equitable systems to sustain the local food economy and improve the overall well-being and health of community members.

Ana Geddes ‘22, a GIV Day volunteer, said, “GIV Day is a really great way to get involved with the greater community and to get out of the Gettysburg College bubble.”

Despite entering the Gettysburg “bubble” just two days prior, first-year students learned the value of serving the community and recognizing others’ perspectives in their GIV Day activities.