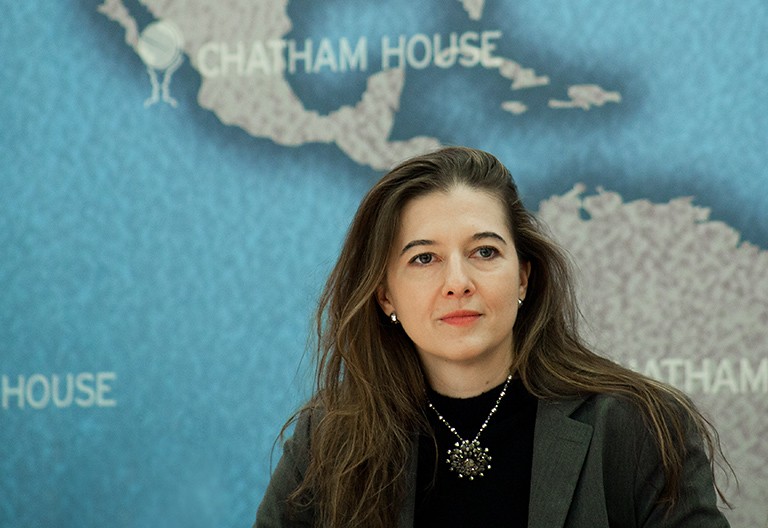 On Thursday, April 11, Dr. Vanda Felbab-Brown presented on the consequences of the United States policy in Afghanistan following the war as part of the Eisenhower Institute Discussions series.

Felbab-Brown, a senior fellow in the Center for 21st Century Security and Intelligence in the Foreign Policy program at the Brookings Institution, shared her insight on international conflicts and U.S. foreign policy gathered through field work and extensive research.

Felbab-Brown then began her lecture, prefacing the war in Afghanistan as a “very significant conflict that for many of you may be quite removed” regarding “lives of U.S. soldiers and humanitarians” affecting regions around the world.

She reminded the audience that the war in Afghanistan is the longest U.S. war, stretching for well over 18 years and still continuing today. She commented that U.S. departure from the war has the potential to result in peace or a vicious civil war following conflict that has been brewing since the ‘70s.

For background, Felbab-Brown gave the audience a rundown of Afghanistan’s current profile as one of the poorest countries in the world. She claimed it is “difficult to understand the scope of human suffering in these places” citing the country’s high rate of mortality and poor quality of life, for instance.

She elaborated on Afghanistan’s issues with inequality as a consequence of eighteen years of war. The country experiences poor humanitarian conditions including women’s lack of access to healthcare and child mortality which escalated after the September 11 attacks. Felbab-Brown reminded the group of the death toll of the U.S. invasion of Afghanistan during the radical Islamic Taliban movement and the dislocated population of refugees and deployments of soldiers throughout the war, exemplifying her claim that terrorism has redefined U.S. conflict.

Felbab-Brown touched upon the effect of climate change on the beautiful landscape of Afghanistan, a theme within this year’s Eisenhower Institute lectures. She has personally travelled in Afghanistan’s mountains and deserts, able to marvel at the beauty rather than get caught up in conflict.

Felbab-Brown contested that changes began to occur in Afghanistan in the ’90s regarding the ability to attend college and the amount of those traveling to Kunduz. There was often no food, and poor living conditions with rape, theft, and crime; at the time of these changes, the local government became the official power of the country

Felbab-Brown’s lecture ended with a question and answer session with the audience, including questions regarding Afghanistan’s possible role in China’s strategy, whether the northern alliance negotiations were a part of the Afghanistan government’s roles or from outside pressure, and Afghanistan’s NATO’s future with its Peacekeeping Mission in former Yugoslav.