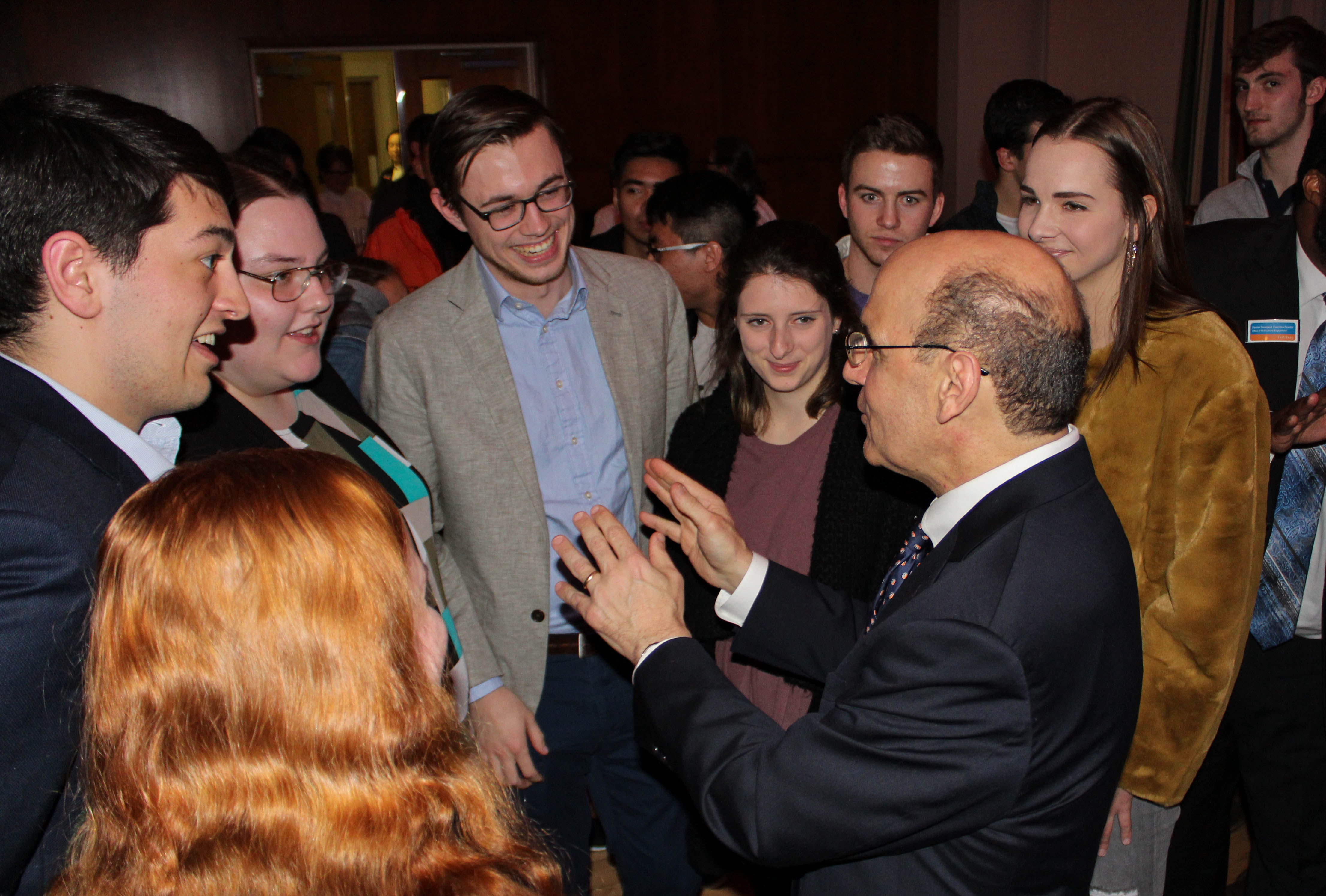 At the Monday, April 22 meeting, Student Senate ran its technocratic elections, along with running through a myriad of new business in the longest meeting of the year.

Giacomo Coppola ‘22 and Jackie Crowley ‘20 sat for the treasurer forum. Among the questions, Mangala asked the pair if they had noticed microaggressions within the Budget Management Committee (BMC) and within Senate as a whole. Later on, senators Alex Xie ‘20 and Erik Cabrera ‘21 asked Coppola and Crowley to expand on what they considered to be a microaggression.

Coppola defined a microaggression as “the way we interact on a day-to-day basis… one of them can be asking questions or making statements that are subtly-racially-charged. I don’t know if I want to repeat one, but I’ve heard people say… ‘Oh you’re really pretty for-” whatever. I think that’s one of the most terrible ones.” He went on to posit that people who aren’t targeted by microaggressions don’t tend to understand them for what they are and that more work needs to be done to talk about these issues.

Crowley vaguely spoke about her experiences feeling uncomfortable in BMC, stating “I know personally one time my freshman year something was said that made me uncomfortable. And it was kind of hard to stand up for myself but I’m glad I did. I think that because I was in that situation I know how it important it is for someone to feel welcome [in BMC].”

This was followed by the forum for the Secretary questions, Katherine Cramer ‘21 and Syd Quan ‘22 both ran. Katherine is currently abroad during the process and sent in a short video detailing why she felt she could fit into the position. Syd Quan sat alone in front of the Senate and was asked by Mangala how her time as the Public Relations Chair for Senate could benefit her. She referred to her promotion of the Senate Instagram and her work on the servo suggestion table.

Courtney Cholewa ‘22 ran unopposed for clubs liaison. She stated that as an executive board that it is important both for the leaders to be approachable, but also for them to go out of their way to ask their constituents what they need from Senate.

Shane Carley ‘22 ran unopposed for Parliamentarian. He was asked how he would ensure that constitutional amendments would be made “thoughtfully and carefully.” He stated, “You have to approach it in a way that we see how it would impact people from all angles.” At the end of his questioning he presented a printout of the 27 page constitution in response to playful jests from vice-president-elect Jack Lashendock ‘20 and secretary Marisa Balanda ‘21.

After questions the forum ended with voting slips being handed out to senators and affinity leaders for a secret ballot style election. Carley and Cholewa won Coppola beat out Crowley 16 to 5, and Quan led Cramer 15 to 6.

President Nick Arbaugh ‘20 presented a Senate Endowment fund alongside John Allen, Director of the Office of Student Activities and Greek Life. The endowment would be made of money of the rollover account and would create an endowment to be used to supplement student leadership developments and off-campus opportunities, as well as create an annual Janet Morgan Riggs Student Leadership Scholarship.

A previously tabled constitutional amendment was once again tabled in the interest of time with no conversation.

Gettysburg Life Witness, a new club that considers itself to be a ‘pro-life’ organization came for recognition. “The mission of Gettysburg College Life Witness is to establish an active pro-life culture among the members of our community by educating our peers on life issues and actively promoting the dignity of life for all persons from conception to natural death,” said president Alyssa Chapman ’22. She clarified that the club was “not just like an anti-abortion club” and wishes to discuss a range of issues affecting the dignity of life, including racism and the death penalty. The club is not affiliated with any religious organizations or political parties. It does, however, intend to reach out to religious, political, and cultural groups to participate in conversation regarding these right-to-life matters.

During the ensuing conversation, those present questioned what exactly the club would do. Some remained confused as to whether or not the club was anti-abortion. Chapman explained that the club would volunteer in town, specifically mentioning Survivors, Inc. People questioned the impetus for the club to volunteer at the shelter if it was a pro-life club, to which Chapman responded that the goal is to make sure that women know all of their options.

Senator Alexandros Economou-Garcia ’22 requested for the club to wait for recognition and restructure “in order to make the club a bit more open to students,” specifically those who might not be comfortable with being a part of pro-life/anti-abortion club. Chapman stressed the need for continuity among their executive board members, as written in the club’s constitution, and said that they had no plans to change anything at this time. After much discussion, the club was recognized with 10-5, with five abstentions.

After the meeting, Arbaugh was critical of the treatment that Chapman received. Alluding to the numerous times that members of the Senate have decried microaggressions and existence of bias within the organization, Arbaugh said that he  considered this to be a real example of that bias.

“We’ve seen a lot of talk about bias in Senate this year,” he said. “I think that was a perfect example of it.”

Most recently, Arbaugh spoke about his apparent silence on the matter on The Gettysburgian’s podcast On Target, “It’s not my place to sit and argue with people about their concerns… I cannot sit there and, you know, yell back ‘It’s not true’ or ‘You’re wrong’ or push back against that because then it looks like, you know, I’m pushing — I’m repressing that sort of talk — I’m pushing back against it too hard… I’m taking it out on marginalized communities and stuff like that.” He went on to discuss that he is aware that people were unhappy with his presidency because of his conservative image, but he maintained that his politics have never entered the Senate floor.

Towards the end of the lengthy meeting, an opinion stating that the ‘Eat to Excel’ posters in Servo with humanlike figures made out of fruit and vegetables should be removed because they are “highly disturbing and unsettling,” according to the document. The opinion was not adopted.

The new executive board will be installed at the next and last Student Senate meeting of the 2018-19 academic year, on Monday, April 29.

(Editor’s Note: I have not written any of the portions of the story that involve me. -G. Mangala)