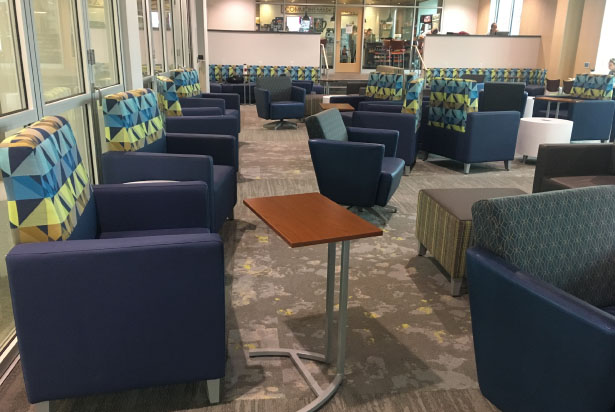 The Junction was filled with students during last week’s Friday at Five activity. (Photo courtesy of Julia Sharapi)

Gettysburg’s Campus Activities Board proudly announced that this past weekend’s Friday at Five event had an unprecedented turnout, reaching full capacity.

Late attendees were unable to enter the Junction until the long line tapered off. One student commented on the crowd: “I was shocked! All I wanted to do was plant a couple flowers in a mason jar but the line was out the door! The Junction was filled with students for hours!”

Due to the unprecedented turnout, CAB members had to call in extra recruits to buy more mason jars, paint, soil, and plants. By the first 10 minutes of the event, all the supplies had run out and two CAB members made an emergency trip to the store to get more supplies.

Students were especially ecstatic about this past Friday’s event, to the surprise of CAB members.

“I… Am… Baffled,” said the mastermind behind the Friday at Five activity, “I just thought we could have a lowkey night painting mason jars and planting flowers. I had no idea the event would become so popular!”

The entire night, however, was not all fun and activities. By 10:00 p.m., a CAB member became so overwhelmed from replenishing soil in mason jars that they had a mini panic attack and had to take a puff from their inhaler and breathe into a paper bag.

Regardless, students were pleased by their well-spent, action-packed night. In fact, some students got back in line to decorate another mason jar.

“I was really excited for this weekend’s event. I busted through the door at 4:45 to ensure I would have a good spot in line. My friends were already there to meet me… And apparently the rest of the student body was as well!”

CAB expects their next Friday at Five event to be just as well-attended. They have bought extra supplies and recruited all members of CAB to work the event. Be sure to clear your calendars and get to the Junction early before spots fill for next week’s Friday at Five.