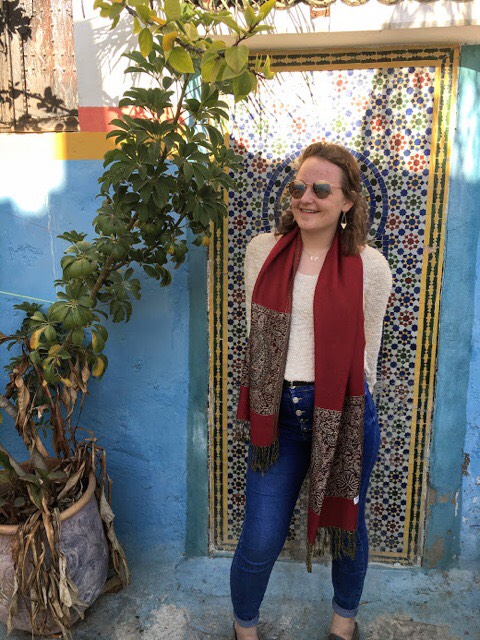 On Jan. 8, the Center for Public Service’s “Women’s Rights & Islam” Immersion Trip arrived in Morocco and began their ten-day trip through the country. Mary Kate Danberg, ’21, sat down to describe the educational and impactful journey she had over the course of those ten days.

The group spent the majority of their time in the city of Rabat, spending approximately five nights in home-stays with Moroccan host families. The host family Danberg stayed with, she explained, consisted of her “host mom,” “host brother,” and a “host sister” who was enrolled in high school.  The high school she attended was in session 6 days a week, from approximately 7:00 a.m. to 7:00 p.m.

“They were incredibly grateful for the private school system,” Danberg said, “because their local public school was not very good.”

“One of the most impactful moments of the trip,” Danberg explained, “was meeting a man in Rabat who had spent nine years in prison after being arrested for his political beliefs.”

Danberg went on to explain that the man had been held in a secret prison, so his friends and family were not allowed to know his location. After being released, he continued to voice his political opinions and work as an activist.

After spending time in Rabat, and getting to see the oldest mosque in Morocco, the group made their way to Marrakech and Casablanca. In Marrakech, they were able to meet with multiple NGOs (non-governmental organizations), to talk about social issues in the region.

In a small, rural town outside Marrakech, the group met with a co-op of women who work to teach young girls in the area life skills like sewing and cooking. Despite not receiving a lot of support from their town, the co-op has received support from national leaders, including the King of Morocco. In accordance with national law, every co-op in Morocco, including the one visited by the immersion trip group, has to be provided with a building.

Due to the stigma surrounding single motherhood in Morocco, the organization and founder have been the recipients of death threats from local religious leaders. They do, however, receive a lot of support from international heads of state, who frequently go out of their way to support the organization while visiting Morocco.

“Even though we already had conceptions of what we thought women’s rights would look like, we were all shocked, either negatively or positively, by the reality we saw there,” Danberg stated.

She also explained that many of the people they talked to were very open to talking about their different interpretations of their faith.

The trip was “incredibly impactful,”according to Danberg, but also incredibly fun.

She explained that they were able to visit markets in every city they went to, with shops covered “floor to ceiling in scarves,” and unique animals on display in the square.

“I never thought I’d ever see a monkey on a leash,” Danberg chuckled, “that was insane!”