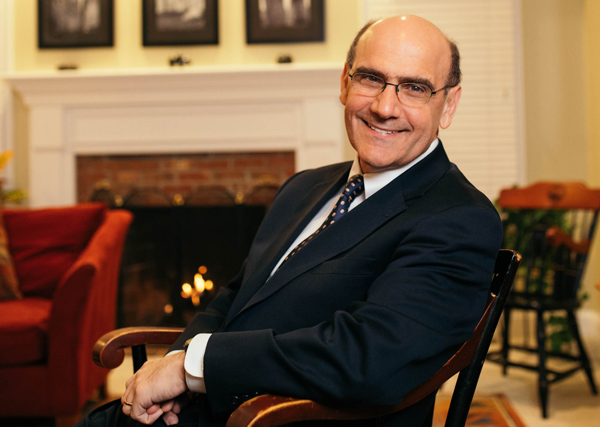 On Wednesday afternoon, the Presidential Search Committee announced that the fifteenth president of Gettysburg College will be Robert W. Iuliano. He is expected to begin on July 1, 2019.

Charlie Scott, Chair of the Presidential Search Committee (PSC) and Executive Vice Chair of the Board of Trustees, said that Iuliano was a unanimous choice who rose to the top of a deep pool of candidates.

“As context, we met a very talented and diverse pool of candidates through the search process,” Scott told The Gettysburgian. “As we began to select for those whose experiences and attributes most closely aligned with those articulated through the ‘listening phase,’ Bob and a couple of others stood out. In the end, there was not just one factor, it was the overwhelming match of Bob’s experiences through 25 years dedicated to higher education, in combination with personal attributes so culturally-aligned with Gettysburg, that made him the unanimous choice.”

Iuliano worked under five of Harvard’s presidents, scaling a wide range of improvements to campus life including diversity in admissions, inclusion, and re-introducing the ROTC program to campus. A lawyer, he has been heavily involved in a lawsuit at Harvard regarding race in college admissions and a $102 million lawsuit involving the government.

Iuliano has no prior connection to Gettysburg College, a factor that appears to have weighed positively in considering the successor of the current president, Janet Morgan Riggs, who is an alumna and was on the faculty for decades prior to her selection as the college’s 14th president.

“President Riggs has done an outstanding job in continuing to elevate Gettysburg College and helping us to maintain a strong position within residential liberal arts,” Scott said. “In our discussions with President-elect Iuliano, we would hope he will spend a considerable amount of time listening and learning about what makes Gettysburg great, as well as where there are areas for improvement. The Board is looking forward to having Bob lead in three broad areas: developing a vision for the future, strengthening organizational capacity and sustainability, and raising our profile and resources.”

The PSC also noted Iuliano’s fundraising acumen. Gettysburg’s endowment lags behind peer institutions such that capital infusion is a key agenda item for the incoming president. Scott said that the PSC is convinced Iuliano will “excel” in that area.

Iuliano came with high praise from Harvard presidents past and present. Drew Gilpin Faust, who retired in 2018 after 11 years as Harvard’s president, said, “Congratulations to Gettysburg College for its brilliant selection of this remarkable leader and wonderful human being.”

Lawrence Bacow, Harvard’s current president, said, “Bob Iuliano is one of the most talented leaders with whom I have ever been privileged to work. He cares deeply about students and undergraduate education. He is a gifted teacher and a fabulous leader. He also is incredibly decent, principled, and humble. Gettysburg has chosen well.”

Nick Arbaugh ‘20, President of the Gettysburg College Student Senate, was more measured in his commentary, but commended the search committee’s work.

“We as a community put our trust in the PSC to make the right choice when it came to our next President,” he said. “By all indications, they have done an excellent job. I know that I speak for all Gettysburgians when I say that I can’t wait to get to know the 15th President of the College.”

He added, “That being said, I would reiterate that it’s unfortunate that the representative government of the Student Body was left without a voice in the process.”

At Harvard, IRS filings show that Iuliano earned approximately $600,000 annually, higher than Riggs’ compensation of $434,460 as reported on the college’s 2017 IRS form 990. Scott declined to give a specific figure on Iuliano’s salary, but said it would be commensurate to the market wage.

“President-elect Iuliano is joining Gettysburg College from a much larger university setting,” he said. “His total compensation plan at Gettysburg will instead reflect what is competitive among similarly sized private liberal arts colleges in the Northeast US, as approved by the Executive Compensation Committee of the Board of Trustees.”