Wandering through Multiverses with Helen Schulman 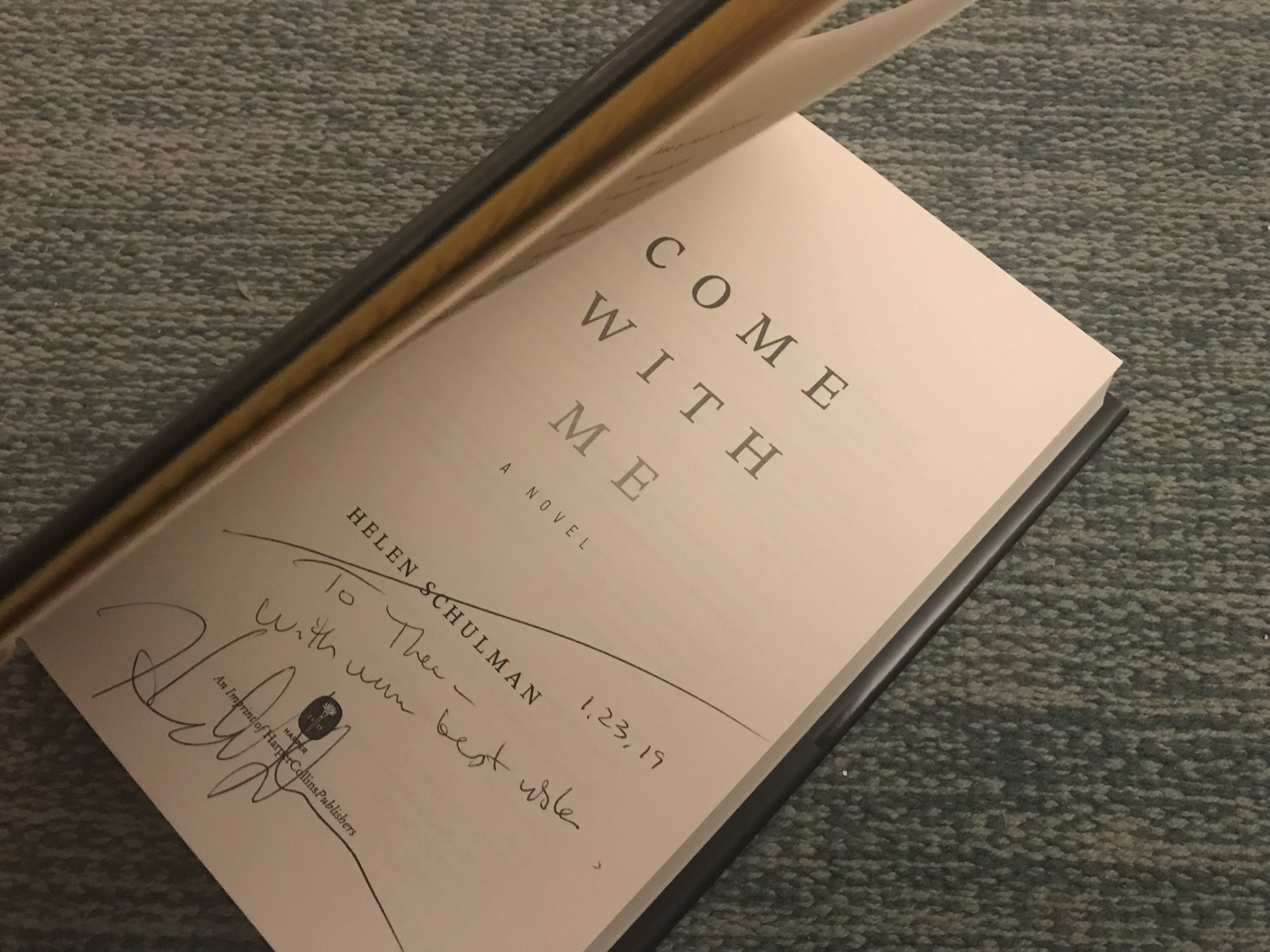 Helen Schulman, author of Come with Me, autographed a copy of her novel for Thea Toocheck ’21 (Photo Thea Toocheck/The Gettysburgian).

On Wednesday, Jan. 23, Helen Schulman was the first speaker in this semester’s reading series in a discussion of “the craziest book I’ve written,” to quote Schulman, called Come with Me.

Schulman is a New York Times bestselling author who has published five books and has had fiction and non-fiction appear in Vanity Fair, Time, Vogue, and the New York Times Book Review, among other publications.

Come with Me is her most recent novel, about a family living in Palo Alto. All five family members have chapters written from their perspectives detailing three distinct days in their lives. Part family drama, part comedy, and part sci-fi reflection on the existence of multiverses, the novel reflects on how technology has changed the way we live our lives.

In the excerpt Schulman read to the audience, listeners became acquainted with her lyrical, descriptive writing. She explained that she likes to give lots of details to make her scenes grounding and real, and that quirky details are much more useful than obvious ones.

An interesting part of writing from multiple perspectives, she says, is discovering the personalities of each of the characters and choosing what they would notice. Part of her creative process is writing uninhibited about the backstories of her characters; later, she combs through and pulls from this what is relevant to her story. In the case of Come with Me, her original basis for the novel was a short story that would not sell; however, because she had so much information about the characters, she was able to expand the story into its final form.

Schulman was intrigued by the idea of multiverses partly because the idea of living life infinitely but parallel felt similar to her identity as a fiction writer with countless ideas in her head. However, the details in her novel are based in more concrete forms; each year, her students at The New School become her research assistants, and together they are able to find endless information on the internet, which Schulman admitted was a tremendous help even though she is “scared of technology” because of the way it has changed the ways we think and live.

After reading her excerpt and answering the audience’s questions, she offered to sign the books waiting for their readers in the back of the room. In getting my own copy inscribed, I struck up a conversation with a man named Frank, who is a former employee of Gettysburg College and now lives in Mechanicsburg. Too timid to ask anything of Schulman himself, I asked for him what or who her favorite book or author was; she then detailed the debt she owes to William Faulkner’s As I Lay Dying, her full consideration of which is available online.

If Come with Me is about our relationships with the people around us, it was in this conversation that I reflected on the incredible ability of books to change people and to bring them together.

Copies of Come with Me are available in the College Bookstore, each waiting to take readers on a journey through its characters’ multiverses and back to reality.