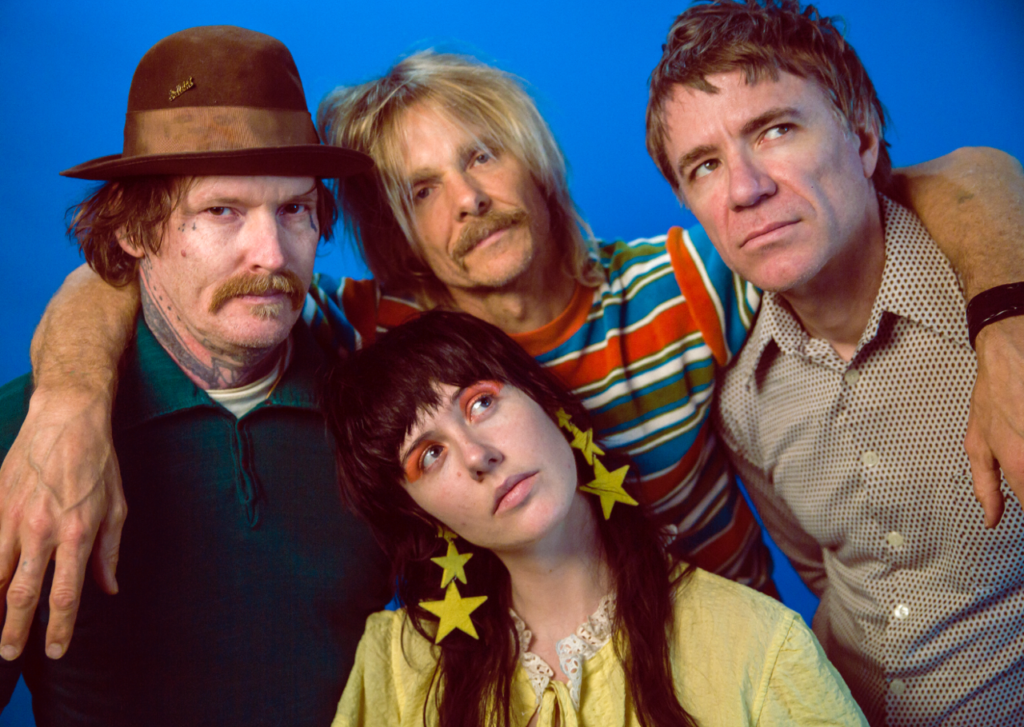 Surfbort, headed by Dani Miller and consisting of David Head, Alex Kilgore, and Sean Powell, are a relatively new punk band from Brooklyn, but listening to them play you might mistake them for some forgotten group from the hardcore era of the eighties. Although Surfbort sounds vintage, the songs on their debut album, Friendship Music, are relevant to 2018, tackling topics from global warming and gentrification to Trump and the government.

I had the opportunity to see Surfbort live this past summer before their debut album was released and I was struck by the showmanship of lead-singer, Dani Miller. Dressed as a bunny and proudly displaying unshaved legs and arms, she jolted the crowd with an electric energy. Swinging her arms as she danced around, she wore a maniacal grin on her face as she belted her lyrics with a sardonic biting edge. Miller felt like the embodiment of a cartoon character, akin to a dark Mickey Mouse. Her stage persona is larger than life. It’s a wild playful exaggeration of American youth, cracking cynical jokes as the world goes to shit around them. The songs are often dripping with irony, abrasive, and full of attitude and frustration. Most importantly of all, it’s music that demands to be blasted at high volumes, probably by teens rebelling against authority, whether that be their parents or “the system.” The challenge for bands like Surfbort, who have reputations as great live acts, is capturing the energy of their best performances where the audience and band are feeding off each other, and translating that into a studio recording that is subsequently compressed into an MP3 file without losing the magic along the way. On Friendship Music the band only succeeds partly.

Clocking in at a succinct thirty minutes, Friendship Music struggles to stay interesting until the end. Miller tries her hardest to carry the songs with her defiant attitude and punky charm, but without the visual juxtaposition of her trademark wide-smile and tongue-in-cheek delivery as the whole package, it becomes abundantly clear that Surfbort only has a limited number of tricks up their sleeves and not as much to say as one would wish.

Before long, the guitar and bass lines become repetitive and start to blur together. Riffs aren’t exactly memorable and at times they are downright forgettable. Every once and a while, the band slows down to pause from the hardcore-punk aesthetic and breathe with some more laid back heavy stoner vibes, but after the third time this happens, it gets tiresome and tedious. At points these sections become so slow and boring that they totally stomp any momentum that the better songs build up. Speaking of momentum killers, is it necessary to loop the same audio clip four times at the end of “White People?” It isn’t interesting the first time, but four times in a row feels like a cruel joke. In addition to this, the mixing is inconsistent. The song “Les be in Love” sounds particularly poor and muddy like all of the instruments were recorded on one microphone at the same time.

As for the subject matter of the songs, the list of topics reads like the headlines to the news these days, but not much more. I like the in-your-face wake-up call about pollution and global warming that is “Trashworld” and the hilariously over the top “45,” but too often I found myself wishing the band would have taken the time to dig a little deeper and say something a little more intelligent than another joke about how small Trump’s hands are. The metaphors can feel trite and there isn’t anything that Surfbort has to say on Friendship Music that hasn’t already been said before. At its worst points, songs lack any self-awareness and come across as parodies of that one edgy “woke” kid at the back of the classroom who smoked weed once and read some Foucault.

Surfbort is a band I wanted to love. I think Dani Miller is a fantastic front-woman, but Friendship Music does not feel remarkable or special in any way. It’s not awful by any means and I’ll admit I smiled more than once listening to the better songs like “High Anxiety” and “Trash World,” but after the initial charm wears off, the album doesn’t have enough steam to hold my attention or keep me engaged. What should feel like a party turns into a slog, and before Friendship Music was over, I found myself hankering for some Black Flag instead.