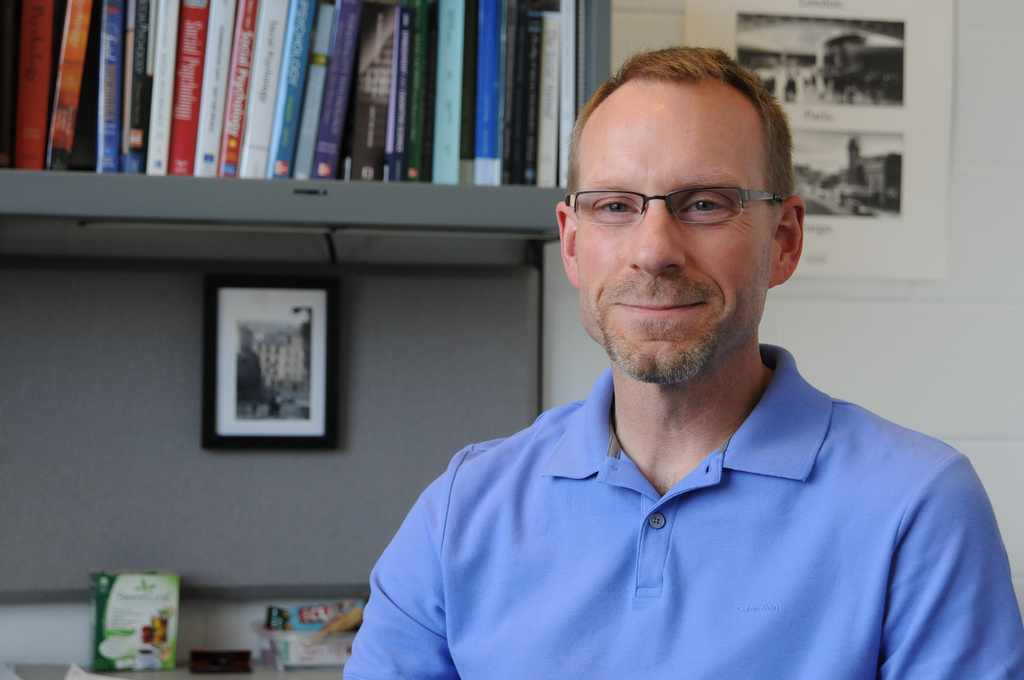 The faculty held a business meeting Thursday afternoon in Mara Auditorium at which the primary agenda item was discussing a motion to adopt a policy that would address instructors teaching and grading their children and other relatives.

Dr. Brian Meier, Professor of Psychology and Chair of the Academic Policy & Program Committee (APPC), presented to the faculty a motion from APPC that would prohibit members of the faculty from grading work produced by their children or other relatives and would recommend that faculty not teach their students in courses for credit.

According to the motion’s rationale, “These situations create potential conflicts of interest and are likely to impact the children/other relatives as well as other students in the course. In some cases, it may not be possible for an Instructor to avoid having a relative as a student in class, for example, if an Instructor teaches the only section of a course required for a student’s major. In such cases the new policy indicates that the Instructor should discuss the conflict with the Department Chair, Registrar, and divisional Dean, and plan for another person to grade the student’s work in the class.”

The motion states that if a course instructor much teach a course for credit in which their child or other relative is enrolled, another member of the faculty from the department or program in question must grade that student’s work.

Members of the faculty who spoke at the meeting largely opposed the motion.

“We ought to have an ethics of not having favoritism,” said Dr. Susan Russell, Adams Professor in Theatre Arts, in casting doubt on the necessity of such a policy.

Several other faculty members questioned how frequently situations have arisen in which instructors have taught their relatives. Meier said that he knew it had occurred “multiple times” within the last year but did not have an exact figure.

“I don’t think we know if there was a problem [in these particular instances],” he said. “I’m surprised to hear that we don’t think there is a problem.”

After the meeting, Meier added, “It seems that APPC misunderstood the feelings people have about this issue.”

While he acknowledged the motion did not foresee cases where only one faculty member might be qualified to evaluate student work, he said he still believes in the principle at stake.

“Personally, I still believe in the spirit of the motion and I think we should avoid these conflicts of interest whenever possible in order to avoid perceptions of unfairness in the classroom,” he said.

Dr. Daniel McCall, also a Professor of Psychology who sits on APPC, said at the meeting that faculty grading their children creates at least a perceived issue for other students in the class.

“My concern is the perception of other students,” he said.

Meier echoed that concern after the meeting.

“Many of us on APPC were concerned about the perception of other students in the class in these situations. We thought that some students might have negative feelings about the student and/or Instructor because they might worry about the possibility of favoritism,” he said. “There surely will be cases in which an Instructor needs to teach a child or other relative and I’m sure most of us have no problem with these cases. If I was in that situation, I would explain it to the class on the first day of the semester. I would want to make it clear that I have a child or other relative in class and I would want to tell students how I plan to minimize subjective evaluations. I think the other students would likely feel better about the situation when an Instructor is upfront about it.”

While there was not a plan to take official action on the motion at this meeting, Meier said that, in light of the feedback received, APPC would consider possible revisions to address concerns raised before moving forward with a vote at a future faculty meeting. He added that it is still unclear what the whole of the faculty feels on the issue since only about 10 of the 102 faculty members present spoke.

“It is difficult to interpret whether the majority of faculty oppose it or whether a vocal minority (who spoke) oppose it,” he said. “It will be hard to know how the faculty in general feel about the motion until a vote occurs. Regardless of whether we proceed with the motion, I think the discussion today was helpful for raising awareness about this and other potential conflicts of interest that may arise in the classroom.”

Riggs followed up on a presentation from the Student Enrollment and Retention Committee (SERC) at the faculty’s roundtable meeting in October in which Dr. Monica Ogra, Associate Professor of Environmental Studies and Chair of SERC, presented projections of demographic shifts for college students over the next decade in “Generation Z” and invited faculty participation in helping the college plan for those changes. Riggs said that she heard a “variety of reactions” after the presentation including some who thought the presentation was “not heavy handed enough” in laying out the potentially bleak picture for the higher education landscape as a whole and its ramifications for Gettysburg as well as from others who left the meeting concerned that jobs will be cut if enrollment declines coincide with the overall decline of the college-going population.

“The message to take away from that meeting,” Riggs said, “is the facts. The demographic situation will be dire only if we do nothing. We do not plan to do nothing.”

She highlighted marketing initiatives and efforts by the admissions office to increase the college’s national recognition as well as ongoing administrative efforts to develop both new curricular programs to meet the demand of college-bound students such as the Entrepreneurship and Social Innovation Initiative as well as new co-curricular programs to help students gain a competitive edge after college such as the Garthwait Leadership Center and the Center for Career Engagement.