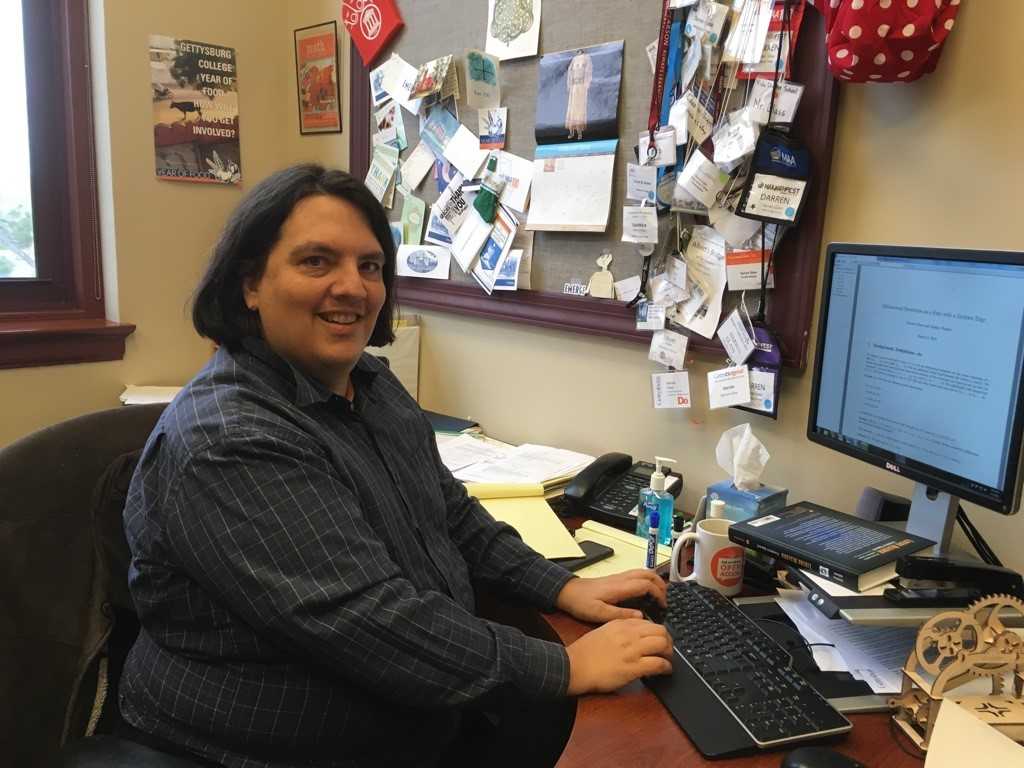 The Gettysburg College faculty held its second business meeting of the year last Thursday and had a fairly light business agenda before reports from President Janet Morgan Riggs and Provost Christopher Zappe. Alumni Professor of Mathematics Darren Glass also gave a report on the first-year seminar program, which he directs.

A 2012 report on first-year intellectual engagement, a 2015 first-year advisory council, and the 2018 mentoring task force each recommended making first-year seminar participation mandatory as did the college’s most recent Middle States Accreditation review. Nationally, Glass noted that various academic studies have identified a 5 to 15 percent increase in retention rate of students who participate in first-year seminars versus those who do not. He said that other benefits include small class sizes, a focused topic, development of writing and research skills, and the ability to introduce students to campus as other benefits of the program. He acknowledged that some first-year seminars are better than others, but that, on the whole, he believes they provide strong value to the college.

“We all know that there are some really amazing first-year seminars and some that are only very good,” he quipped.

Glass said that he would continue to gather more input and hold an open meeting of faculty to discuss bringing a motion to the body later this semester to make first-year seminar participation mandatory for future students.

First Year Seminars By the Numbers

After a quorum count determined that 113 faculty were present, exceeding the requisite 102 to have a quorum, the faculty approved a motion presented at its first meeting to approve a new study abroad program in Rio de Janeiro, Brazil. The CIEE Liberal Arts program will begin in the spring of 2019. It was approved 106-2 with five abstentions.

Provost Christopher Zappe announced the retirement of Dr. Gail-Ann Rickert as Dean of Academic Advising, a role in which she served from 2001 through the spring 2018 semester after having previously served as associate dean since 1997. Rickert, who will continue to serve as chair of the classics department through the end of the academic year, received a standing ovation from the faculty in attendance. Zappe announced that Anne Lane, who has served as Associate Dean of Academic Advising since 1991, has assumed the role of Dean effective this fall.

Foreshadowing an upcoming discussion among the faculty on strategies to strengthen student enrollment and retention efforts, Zappe encouraged those in attendance to read Demographics and the Demand for Higher Education, a new book written by Dr. Nathan Grawe, Professor of Social Sciences at Carleton College. Zappe said the book kept him up all night the night he began reading it and is a valuable look at where the higher education landscape is headed.

Zappe also encouraged attendance at Fall Honors Day, which is on Oct. 19 at 4:00 p.m.

President Janet Morgan Riggs outlined the results of the college’s recent fundraising campaign, which netted $160.3 million, and noted that the figure was particularly remarkable given that there were no donors of more than $10 million. More than 25,000 donors contributed to the campaign, which, Riggs said, reflected an “identity for Gettysburg College” and “pride [that] was really palpable.”

Riggs joined Zappe in encouraging faculty to read Grawe’s book, which, Riggs said, points to “challenging demographics ahead of us.”

Finally, Riggs noted that she had become aware some department chairs have complained that she, as the college president, controls the agenda and stifles debate at faculty meetings, which inhibits the faculty’s prerogative in governance of the college. While noting that chairing faculty meetings is not her favorite task, she said that it is the Faculty Council, chaired by Associate Professor of Music Jocelyn Swigger, that sets the agenda and time limits for discussion at faculty meetings and the college’s bylaws that indicate she must chair the meetings.

“The college bylaws designate the president as the chair of the faculty,” she said.

Riggs went on to suggest that, although the faculty could amend that provision upon the arrival of the new president in the spring, she believes “there is a risk there” in that the president could become disconnected from the faculty and not even want to come to faculty meetings.

During a subsequent comment period, Professor of History Michael Birkner said that the president serving as chair of the faculty dates to the college’s founding in 1832 when the president came from the college faculty and that it was not until 1910 that the college had a president who was not already a member.