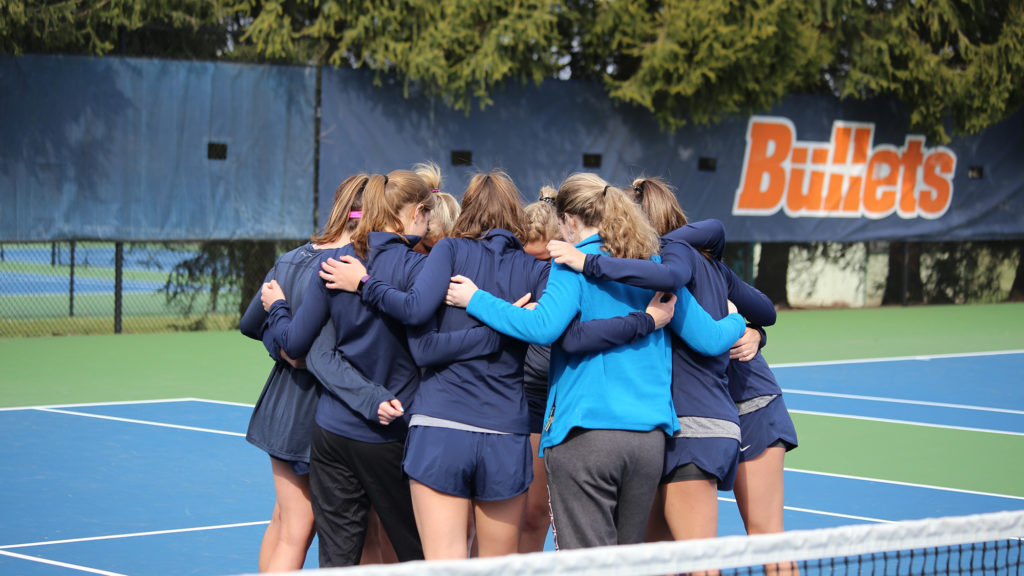 Following a report on multiple sustained concussions by women’s tennis players this season, the conference decided it would be best to eliminate actual tennis balls from the game.

Their first idea was to have the players use the plush balls from elementary school gym class. However, senior captain Emily Lutz suffered a concussion when her opponent accidentally threw her racket across the net.

The conference realized that their first plan would not be comprehensive enough to eliminate the possibility for injuries by their tennis players. So, they began asking the colleges that make up the Centennial Conference to suggest ideas for competition.

Swarthmore coach Jeremy Loomis suggested the players battle it out with their minds by competing in a math competition. The Franklin and Marshall coach was not a huge fan of this idea as he is prone to paper cuts.

He then suggested they find a blow up, bouncy tennis net somewhere to create a safer environment for the game. He said they could just bounce on a trampoline and play at the same time to really test who is the best in the conference.

In the end, it was Gettysburg College’s Ali Flores who suggested Wii tennis. It was the perfect solution in that the athletes could still use their tennis skills, but there would be no fear of injury.

Following the switch to Wii, the Gettysburg women’s team really found their stride as a team. Under the guidance of their three senior captains, the team began practicing day and night to really perfect their Wii strategy.

Senior captain Erica Paul had been a big Wii player when she was younger, which gave her a competitive advantage over her teammates. Coach Flores decided to put her in at number one singles.

The rest of the Gettysburg lineup for their first Wii match against Johns Hopkins was decided based on challenge Wii matches between team members.

Paul would play Kashyap in first position, while junior Maria Martinovic would play Strickland at second, and senior captain Erin Sweeny would play Asokumar at third.

The race for fourth, fifth, and sixth was a little more difficult for Coach Flores to determine as the rest of her team all had the potential to win a match. In the end she chose first-year Amanda Vinges to compete against Gauch at fourth. In fifth was Lutz against Simon and finally sophomore Caroline Feustel against Gerke.

The Gettysburg team was feeling strong going into their first Wii match, despite Johns Hopkins history of being dominant in the Centennial Conference in women’s tennis.

As the matches got started, Paul got out to a quick lead over her opponent and was able to put her away in less than 20 minutes. She did not drop a single game in the first Wii match for the Bullets.

Martinovic looked less certain in the first few minutes of her match. Gettysburg knew that if they dropped the match at number two they might have a difficult time coming back. Martinovic and Strickland were going shot for shot until Martinovic hit a heroic winner in the final set.

The Bullets were feeling good about their momentum and when Sweeney easily put Asokumar away, they just needed one more individual win to secure their team victory.

Things took a brief turn for the worst for Gettsyburg when Vinges was tripped by her opponent during a particularly physical Wii match. Vinges hit the floor of the gym hard and immediately grabbed her ankle in pain.

This was a good choice for Gettysburg as in the end, Feustel clinched an individual victory as well as the team win.

Gettysburg will look to continue this Wii success this weekend against Ursinus at home beginning at 10AM.

Claire Healey '18 is a sociology major with a minor in education. She is currently the editor of the sports section and has been a staff writer for the sports section since her freshman year. She is a member of the Alpha Omicron Pi sorority and has served on their executive board for two years. She also volunteers with the Challah for Hunger organization on campus.