Home » Features » Parker Has Taught at Gettysburg for Over a Fourth of the College’s History. This Year, He Retires.

Parker Has Taught at Gettysburg for Over a Fourth of the College’s History. This Year, He Retires. 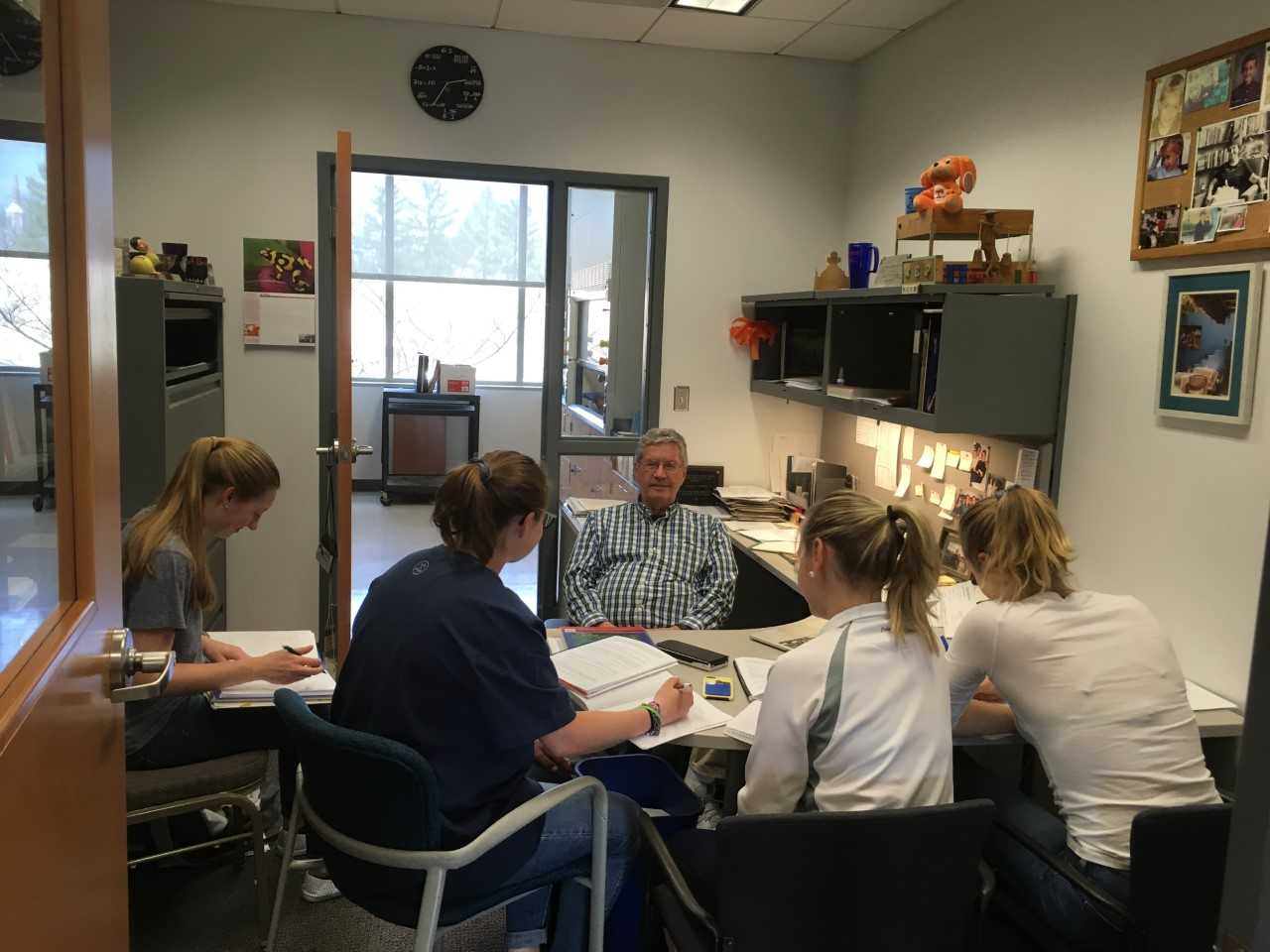 While many of his friends and peers from the University of North Carolina went into industry, Parker decided to teach. He made this decision since “academia gives you all types of freedom” including a flexible schedule, freedom to design his courses, and unlike in industry, “no one looking over your shoulder.”

Parker then clarified that while hours may be flexible and he could stay home with a sick child if needed, professors work much longer than 40 hours a week in classrooms, labs, grading papers and helping students.

Parker has taught at Gettysburg College for 51 years. This equates to over a quarter of the college’s history! In 51 years, things have changed.

For a start, the chemistry department was once housed in Breidenbaugh Hall and would be until the fall of 2002. Parker actually helped design many features of the Science Center along with Emeritus Professor Joseph Grzybowski and Professor Donald Jameson. Parker was also instrumental in initiating the Biochemistry and Molecular Biology program. He co-wrote the grant application to Howard Hughes with Emeritus Professor of Biology Ralph Sorensen that jumpstarted the program and was happy to see the chemistry and biology departments coming under the same roof with the construction of the Science Center.

Parker said that the students have also changed over the years. “Students are better prepared. This is going to fly in the face of cynics, but we’re getting better students,” he commented adding, “not that they all work as hard as they should, but they are more capable.” He suspects that this is probably a reflection of Gettysburg’s increased selectivity; however, he notes that while students may be more capable, they are also busier and more involved than ever and marvels at how some students try to balance sports, musical ensembles, and courses, especially students who take multiple labs.

The college has also gotten less formal. At the start of his tenure, male professors wore a shirt, tie, and jacket, and on occasion would take off their jacket to teach. Now, few professors even wear a tie. Parker commented that this change has been for the better since he “never felt like [he] had to wear a coat for respect.” Parker also reported that students “never called me Parker in the past.” It was always Dr. Parker or Professor Parker, but he did not mind the informality since, “it’s not us versus them. We’re in this together. It’s a joint project.”

Within the department, Parker was a team player. At times forgoing his own research, he served as the chair of the Chemistry Department for 18 years to allow fellow professors Grzybowski and Jameson to develop their research projects. Parker does not regret this, but he did comment: “I can’t say that I did it out of joy.”

While department chair, Parker looked out for his colleagues, says Professor Michael Wedlock. Wedlock provided the following anecdote: “So when I was hired, the question was raised if I wanted a PC or a Macintosh computer. At the time only PCs were allowed. The college President at the time was very against Macs, and they weren’t supported by IT. The rest of the department used Macintoshes and had got them before the ban. I had only used Macs in the past and said that I would prefer to use one. Dr. Parker said that would be fine. He came back later and said that he went to the provost. A week later, he said the question has gone up to the president’s office, but I should know soon. As a new professor, that terrified me, but at the end of the day, Parker got me my Macintosh. He was willing to fight for that.”

Dr. Timothy Funk ‘00, the current chair of the Chemistry Department, has known Parker both as a student and as a colleague. “I had Dr. Parker for three classes when I was a student: Chem 111, Chem 112 Honors, and Advanced Inorganic Chemistry. He was also the lab instructor for my Chem 112 Honors lab,” explained Funk continuing, “I valued his kindness, patience, and dedication to teaching when I was a student, and he has continued to inspire me now that I am his colleague. He has given so much to Gettysburg College, and he will be missed by students and faculty!”

Assistant Professor Kate Buettner has similar praise for Parker. “Dr. Parker is my department mentor. I spend a lot of time in his office getting help just like the students. He has been really good at helping me find how I want to present things in class.” Buettner then praised Parker’s open mindedness: “[Parker] is still really willing to keep up with the changes in the student body.”

While he has not been an active researcher in recent years, Parker has been an extraordinarily active educator. Parker has taught courses across the department, even designing an interdisciplinary course on symmetry. His favorite courses to teach are the general chemistry sequence. In a given semester he has taught between 70 and 170 students. Meeting a diverse group of students is what he enjoys most about teaching.

On the average weekday, the popular professor is surrounded by a flock of general chemistry students in need of help with their homework and lab work. He enjoys office hours and informal question and answer sessions with students more than lecturing in the classroom.

Students value Parker’s commitment. When Parker’s impending retirement was mentioned, Marni Granzow ‘21 exclaimed, “He can’t leave – we need him!” Sitting next to Granzow in Parker’s office, Abigail Marconi ’21 reported that “Professor Parker solidified [her] decision to become a chemistry major.” Taylor Buckley ’19 had a similar experience: “Parker not only got me to stop hating chemistry – he got me to major in it!” Amelia Hou ’19 credits Parker with her choice of major too saying: “I decided to major in chemistry because of him.”

“I mean we all love him,” claimed Matthew Coe ‘21 to the agreement of a crowd of students gathered in the chemistry lounge.

Professor Donald Jameson had this to say about Parker’s often crowded office: “Parker doesn’t have any regular office hours. They seem to run from when he gets here in the morning until 5:00 p.m., and you are likely to see students in his office at any time.”

It wasn’t always like this. According to Parker, as recent as 10 years ago “students rarely came to ask questions.”

Associate Professor Lucas Thompson had this to say about the traffic in Parker’s office: “It’s not just students that he helps in his office. My first year here I spent more time in his office than the students did. All of the time he has for students, he has for colleagues as well. He made my transition here into teaching much easier.”

What is the key to staying sane teaching for 51 years? According to Parker: “Patience. I’m a pretty patient person.” While some students have tried his patience, Parker admitted that sometimes he and students have too much fun and get distracted from chemistry.

Parker reflected that students helped him as much as he helped them after the death of his wife Frances Parker. The Parkers were married for 46 years when Frances died, and many current students will recall Professor Parker taking leave in the spring of 2016 when she passed. Most people enrolled in Chemistry 108 will also remember that he did not leave for long – taking solace working with students and continuing as he had for 49 years to be a resource and mentor to students.

Parker had this to say about family: “family was extremely important to me. I didn’t neglect them. If I had time to camp, hike, play tennis – that was a bonus. I tried to lead a balanced, reasonable life.”

Parker said that he will miss teaching and mentioned possibly leading review sessions for general chemistry exams even after retirement.

If given the chance, would he choose to come to Gettysburg again? “Yes, I’d do it again, if they offered me a job. I never did a post-doc, so maybe they wouldn’t hire me in today’s market.”

We can only hope that Gettysburg College would rehire such an inspiration.