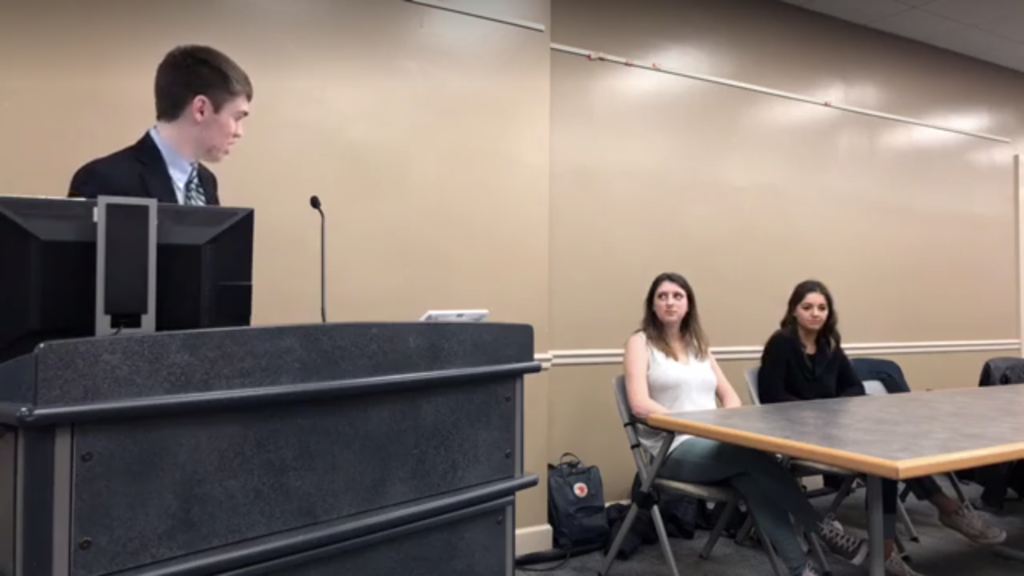 Senator Sarah Berkowitz announced that two clubs are being put on fiscal probation because they did not fill out the required Google Form: ROTC and APO.

Senator Kate Helmstetter followed Berkowitz’s announcement by adding that the Executive Board will be holding three attendance hearings this week and urging clubs to send Senate representatives to Senate meetings to avoid fiscal probation or derecognition.

Senate then moved on to the Q&A forum moderated by Benjamin Pontz, representing The Gettysburgian, a non-Senate funded organization, for the presidential and vice presidential candidates for Student Senate. The entire forum was streamed by The Gettysburgian on Facebook Live and can be viewed here or embedded below:

Vice Presidential candidates Marisa Balanda ’21 and Pat Custer ’19 discussed the changes they wished to make to Senate as Vice President. Balanda urged for a senator training period, explaining that she would have benefited from such a process. Custer explained that he would like to continue the trend of Student Senate working as a true “activist body” and that the student body should “not [be] afraid to be critical of the administration.” Balanda added that Student Senate should focus on “the task force that will be starting soon, that will be a forum for us to address facilities issues.”

Pontz noted that a large responsibility of Vice President is working with the election process of Student Senate. Both Balanda and Custer agreed that while the new policies that were just voted into action last week will be great in the long run, they will take some getting used to.

Moving to the issue of the veto of the Young Americans for Freedom budget last week, Pontz questioned Custer on why he abstained from the Senate vote. Custer explained that he did not feel that he had enough information about James O’Keefe, but agreed that it was not helpful that 30% of present Senators abstained from voting. Balanda explained that she had voted no due to the new Freedom of Expression philosophy and The Gettysburgian’s editorial. She said that she did not believe that bringing James O’Keefe to campus would align with the values in the philosophy. Both candidates stated that, if a vote to overturn the veto occurs in two weeks, they would vote no on the motion.

Pontz then proceeded to open the forum up to the Q&A portion for the vice presidential candidates. The senators were questioned about the lack of attendance by many senators at committee meetings, even with the standing policy that all senators must sit on at least one committee. Both candidates suggested attendance policies be put in place to enforce committee attendance.

Presidential candidates Haley Gluhanich ’19 and Anna Burns ’19 also opened with their projected changes to Senate, if elected. Burns discussed wanting to cut meetings down to two per month, with one meeting set aside for pressing student concerns and one set aside for budget requests. She also mentioned recruiting senators from beyond the political science and economics majors, which she argued currently dominate the Senate’s ranks. Gluhanich discussed extending outreach, especially surrounding student concerns.

Pontz then referenced President Luke Frigon’s ’18 veto at last week’s Senate meeting and asked the candidates if they would exercise their presidential right to veto. Gluhanich stated that she would avoid it, but that it would depend on a case-by-case basis. Burns stated that she would mostly likely not exercise her right to veto. Both senators voted for the allotment of the YAF budget and stated that in Frigon’s position they would not have vetoed the allotment.

Both candidates said that they believed Senate was working well as an activist body and they would like to see that continue. Pontz went on to ask the candidates to explain their progress as Senators and in other positions. Burns discussed her work as Public Relations Chair of Student Senate, to which Pontz pointed out the lack of updates on Senate’s social media platforms. Gluhanich discussed her work on CAB and her desire to create an ‘event reflection form’ for Senate funded events (she uses a similar form in her role with CAB), to which Pontz questioned the efficacy of such a form in the midst of some clubs’ unwillingness to fill out the Google Form surrounding finances. Gluhanich suggested strongly enforcing form submission policies and, if needed, enacting probation to ensure compliance.

Pontz then moved to open the forum to questions from the room. President Luke Frigon ’18 asked the candidates if they felt could truly represent the student body, and attend the large number of meetings that the President of Student Senate must attend each week. Both candidates assured the audience they would be a good match for the role, and that they could represent the student body. Both committed to attending the meetings required of them, and said they would cut back on other commitments to meet these obligations. Senator Sarah Berkowitz ’18 asked about each candidate’s perceived leadership style. Gluhanich considered herself to be a good guiding force to be able to get things done in Student Senate. Burns defined herself a good listener and approachable.

Travon White-Sams ’18 questioned the candidates’ ability to represent minority students who have not felt heard by Student Senate in the past. Gluhanich argued that the affinity groups would help with minority’s representation in the business of Senate, and added that she will push Senate to increase awareness and activism towards student concerns. Burns posited that club representatives should have a vote and that the Diversity Committee should continue to have a strong role in Student Senate, as they will be able to help increase minority representation in Senate.

Pontz closed the conversation by asking candidates how they would go about representing the campus as a whole, both on a personal level and academically. Burns and Gluhanich repeatws that they would strengthen outreach and to the student body.

After wrapping up the forum, President Luke Frigon opened up the floor for student concerns, which surrounded the lack of working washing machines and filling out the Google Forms when clubs use their allotted money.

Vice President Aimee Bosman ’18 urged students to vote in the election and reminded attendees that voting opens on April 3 and closes on April 6 at 5 p.m.