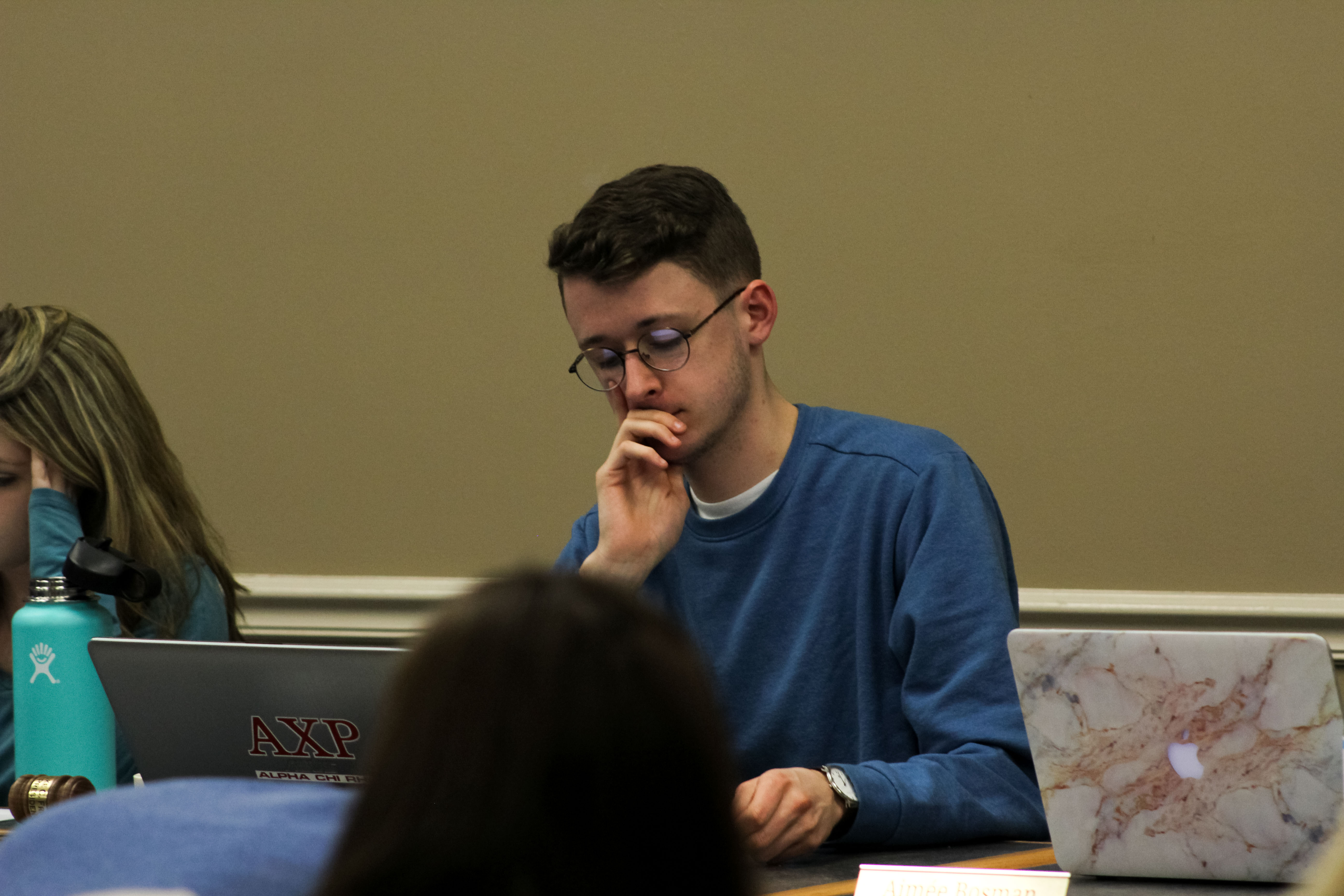 The March 26 meeting of Student Senate was relatively short, but quite lively as President Luke Frigon ’18 exercised the first veto of his tenure.

Prior to the budget requests, however, Senate addressed several procedural matters.

Secretary Kate Helmstetter ’18 announced that  three clubs — Fly Fishing Club, Gburg TV, and Lego Club – were being derecognized due to a lack of presence at Senate meetings and lack of communication about attendance, in accordance with Senate constitution.

The meeting then moved to a heated discussion surrounding the Young Americans of Freedom’s (YAF) $2,000 budget request to bring James O’Keefe, founder of Project Veritas, to campus to speak in mid-to-late April.

YAF Senate Representative Wellington Baumann ’20 explained, “James O‘Keefe will be coming to campus to speak about his journalistic experience. [He] is an award-winning journalist and writer. He is the president of Project Veritas and Project Veritas Action, a non-profit organization dedicated to investigating corruption, dishonesty, waste, and fraud in both public and private institutions.”

Many Senators raised concerns surrounding O’Keefe’s arrest and guilty plea back in 2010 surrounding an incident of entering a senator’s office under false pretenses in 2009, and around his apparent involvement in the intentional planting of a fabricated sexual assault allegation against failed Alabama Senate candidate Roy Moore as part of an effort to discredit The Washington Post, to whom the allegation was made and who determined it was inaccurate as part of its fact-checking process.

“Because of his shall I say complicated history, why has YAF chosen to bring this specific individual to campus and how does your club think it will elevate the discussion among Gettysburg College students to higher degree?” he asked.

Baumann argued that bringing such a controversial member of the political scene to campus will inherently elevate the discussion and allow students to think deeper, invoking the college’s liberal arts educational philosophy.

After much debate, Lashendock motioned to send the budget back to the Budget Management Committee, requesting that YAF seek additional funding from its national organization. While the voice vote was sufficiently close that Frigon requested a roll call vote, during that roll call, only Lashendock voted in favor of the motion while a number of senators abstained. McKenna called the evident change in people’s votes from when there was a voice vote to a roll call “ridiculous,” and, for the remainder of the discussion about O’Keefe, all votes were held via roll call.

After a bit more discussion, Senator Katherine Cramer ’20 moved to allot the full amount. The vote was 13 to 6, in favor of the motion, with 8 abstentions (three of which were members of the executive board: Vice President Aimee Bosman, Treasurer Sarah Berkowitz, and Helmstetter). Despite the vote’s passing, Frigon proceeded to veto the budget request in accordance with his constitutional prerogative.

“I don’t feel like we had an adequate conversation, and, for reasons I am more than happy to discuss outside this Senate meeting, I am going to exercise my presidential veto,” he said.

To override a veto, a two-thirds majority of senators present would have to vote aye; had such a vote to override occurred at tonight’s meeting, 18 of the 27 voting senators present would have had to vote aye to successfully override the veto even though the original margin of 13-6 is greater than a two-thirds majority, McKenna said after the meeting. No motion to override occurred, so the budget request can next come to the floor after two weeks.

After the meeting, Frigon told The Gettysburgian that much of his thinking aligns with an editorial the newspaper’s editorial board released earlier in the day on Monday.

“In my opinion, O’Keefe is a sensationalist, a gotcha reporter, and can barely be called a journalist at all,” Frigon said in a written message. “I don’t think that he brings anything AT ALL to the table, and I don’t think Senate money should be spent on giving him a platform to spread psuedo-truths and shoddy ‘journalism’ techniques.”

Baumann disputed the notion that Senate did not have a sufficient conversation on the budget and vowed that YAF would press on in its endeavor to bring O’Keefe to campus.

“While the President has the power to veto, he did so on a budget that had majority support in the senate,” Baumann explained in a statement to The Gettysburgian. “His claim that there was not enough discussion is simply untrue. The senate was given ample time to review the budget and there was a great deal of debate on the floor of the senate. When all was said and done, the budget passed. I hope that the senators will work to override his veto.”

Senate went on to unanimously approve half of the budget request for Bomb Squad’s t-shirts in accordance with the BMC’s recommendation.

Next week, Senate will host an open forum for candidates on the ballot to serve as president and vice president in the 2018-19 academic year. Petitions and applications for all Senate executive board positions as well as to serve as a senator are due to current Vice President Aimee Bosman by Thursday at 5:00 p.m.

Editor-in-Chief Jamie Welch filmed the video used in this report.